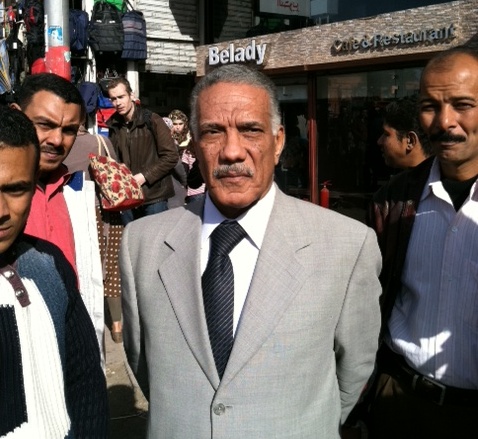 Tahrir Square has been a great place for fortuitous chance encounters this week. On January 26, I noticed Judge Zakaria Abd al-Aziz, former head of Egypt’s powerful Judges Club and a longtime advocate for judicial independence, looking – I imagine – just as dignified outside of the Hardee’s fast food chain restaurant on the perimeter of Tahrir Square as he does in a courtroom. Professing my concern over the military’s current plan to fast-track a new constitution in the few weeks between the conclusion of Shura Council elections in March and the start of the presidential nomination period on April 15, I introduced myself to Judge Abd al-Aziz and asked him to comment on the current state of play.

Listen to the interview in Arabic (.mp3)

In interviews with the Egyptian media as far back as May of last year, Judge Abd al-Aziz expressed concern over the transitional sequence activated by last year’s constitutional referendum, requiring the completion of parliamentary and presidential elections before the drafting of a new constitution.  In a joint statement signed by 46 other judges and legal scholars, Abd al-Aziz called for the constitution to be written first, before any elections, to ensure that Egypt’s democratic transition would be guided by the parameters of a fair and democratic legal framework protecting citizens’ rights and imposing clear limits on executive power.  In the following months, the ruling Supreme Council of the Armed Forces (SCAF) began to view the constitution as the keystone to its foothold in the future political system and strategically “reinterpreted” the original sequence implied by the referendum to call for a new constitution before a presidential election in June 2012. At face value, it appears that the military was aligning with Judge Abd al-Aziz’s “Constitution First” position – but taking into account the SCAF’s strategic interest in perpetuating its political privileges through the future legal framework, it’s clear that the military’s shifting stance on the transitional sequence was motivated by self-interest, rather than a desire for the democratic outcome envisioned by Judge Abd al-Aziz.

When it became clear that the reconfigured sequence above – allowing the constitutional process to unfold under the oversight of the ruling Supreme Council of the Armed Forces (SCAF) – might give the military an opportunity to preserve its privileged political and economic status in the new legal framework, Judge Abd al-Aziz spoke out about the potentially damaging implications of the “Elections first” scenario. Wary of the possibility of military interference in the drafting of the new constitution, Abd al-Aziz called for the formation of a temporary presidential committee to oversee the duration of the transitional period during, in which a new constitution would be drawn up in the lead-up to a fair presidential election in which committee members would be ineligible to run.

Eight months later, the SCAF’s preferred transitional sequence is about to produce the dysfunctional and undemocratic outcome foreshadowed by Judge Abd al-Aziz: A constitution drafted under military rule and at breakneck speed.

Judge Abd al-Aziz confirmed my fear that “forming the constitution while the SCAF is still in power in place of a civilian president will confuse the transition and allow the military to expert pressure on the constituent assembly to preserve its special privileges in the constitution,” in his words.  The opportunity to draft a constitution properly was in the run-up to the March referendum last year, but in ratifying a package of amendments that stipulated elections before a new charter, voters set in motion a dysfunctional constitutional process that has gone badly off the rails. Formerly one of the “Constitution Firsters,” Dr. Abd al-Aziz has now revised his stance to advocate for delaying the constitutional process until after the SCAF transfers power to civilian leadership through the presidential election in June, to ensure that the constitution’s integrity is not compromised by the military’s interference and oversight.

While some critics of postponing the constitution have pointed out that a president elected before his powers are constitutionally defined could allow the executive branch to claim absolute powers. However, Judge Abd al-Aziz was confident that the next elected president “will not have an interest in interfering with the work of the parliament-chosen constituent assembly [a one hundred-member committee tasked with drafting the new charter].” If there is an understanding that “the new constitution will be applied retroactively to define the powers of the sitting president,” Judge Abd al-Aziz believes it is preferable to see the constitution drafted under a civilian president with constitutionally ambiguous powers rather than under the oversight a military leadership that rules by decree.

Judge Abd al-Aziz outlined an alternative, best-case scenario in which a “provisional, temporary president and People’s Assembly would serve for another two years, during which we would have the political space and time to draft a constitution.” Once the constitution is written over a two-year period involving extensive roundtable consultations and public engagement, elections would be held again, resetting Egypt’s democratic transition on a clean constitutional slate signifying the birth of a new, post-authoritarian political order. However, Judge Abd al-Aziz was certain that his proposal “will fall on deaf ears with the People’s Assembly, the SCAF, as well as the next civilian president.”

While these two scenarios offer some hope that Egypt’s constitutional process can still be salvaged to produce a legitimate and consensus-based legal framework, the current lose-lose situation — either writing a constitution too quickly under military rule or postponing it until after the election of a president with constitutionally ambiguous powers – could have been averted a year ago if only Egypt’s interim leaders had had the wisdom to put down in writing, before any elections, a constitutional framework to safeguard Egypt’s democratic transition.

Judge Abd al-Aziz hopes that the people have learned the lessons of their fatal mistake in the referendum on the SCAF’s proposed constitutional amendments last March, which set the whole transitional sequence on a collision course. “In the last referendum, people accepted the package of constitutional amendments as an interim legal framework but later realized that the constitution should have been written before anything else. Now they have learned from that mistake and will be careful in the next referendum,” Abd al-Aziz said.

However, others are not so sure that the public possesses the political literacy and consciousness needed to grasp the high stakes involved in drafting a new constitution. Many are concerned that the passage of the referendum on a constitution constructed under the auspices of the SCAF and Islamist-dominated parliament, is a foregone conclusion. Negad El Borai, one of Egypt’s most respected legal thinkers and human rights advocates, fears that the short time period remaining before the constitutional referendum is not enough time to foster broad-based awareness of the constitution’s significance and allow for public debate on its content. “It should take at least a year to have an adequately inclusive discussion,” El Borai said, noting that “the important feature of a legitimate constitution is not its content or language but popular buy-in from the people.” The constitution is the key to codifying a new and more democratic social contract is the post-Mubarak Egypt – It should reflect a deep and durable consensus that cannot be legitimately forged overnight, or under the grip of military rule.