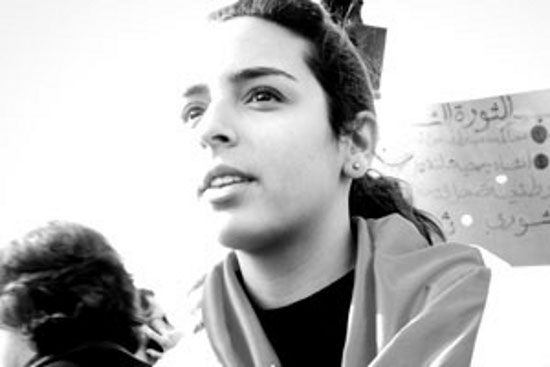 Bold, outspoken, and admittedly stubborn, Sarah Abdelrahman has not become one of Egypt’s most prominent political activists by keeping her opinions to herself. With over 20,000 followers on Twitter – where she cranks out live updates from Tahrir Square at a dizzying pace –Abdelrahman has successfully leveraged social media and her hit YouTube video series, "Walla Eih," to voice dissent and spread political awareness during and since the January 25 Revolution. When the latest round of clashes between security forces and protesters erupted in downtown Cairo on December 16, Abdelrahman and other young activists mobilized rapidly online, documenting the violence in excruciating detail before the mainstream media outlets even caught wind of the story. Even though she was not on the ground at the time, Abdelrahman used Twitter to disseminate images and live video directly from Tahrir Square and the Cabinet building — where soldiers and security forces used lethal violence to break up anti-government sit-ins — and issued urgent calls for medical assistance to the hundreds of injured protesters. In an exclusive interview with EgyptSource blogger Bahaa Hashem, she expressed defiance and disgust with the use of violence against civilians: “The military council can kill us but they but they can never kill our dignity.”

By digitally documenting political injustice and demanding accountability for Egypt’s leaders, Abdelrahman has helped launch a new tidal wave of “citizen journalism” that has engulfed Egypt – all this while enrolled as a full-time student of theater at the American University in Cairo.  Over the past year, a revolutionary generation of young activists has been hard at work building the cyber infrastructure of a new media movement, spanning Twitter, Facebook and the blogosphere. The rise of citizen journalism was fueled by growing disillusionment and frustration with “the many shameful lies we hear from state media,” Abdelrahman explained. One of the factors that motivated activists to take to the streets  – besides the enormous contempt for the former regime and the obvious need for a new political paradigm – were the jokes belittling the January uprising as an “event” organized through Facebook, which portrayed the grassroots movement behind the protests as amateur and destined for disappointment. “That day effectively changed my life, as it did for most Egyptians,” Abdelrahman fondly recalls the original “million-man” demonstration on January 25.

When the regime and later the interim government continued to repress protesters rather than yield to their demands, Abdelrahman became even more convinced that citizen journalism could play a vital watchdog role in holding Egypt’s leadership accountable for the rocky state of the transition. Present in Tahrir Square from the beginning, Abdelrahman personally witnessed the egregious and systematic human rights violations committed by the Mubarak regime —  beating, shooting, and running over of protesters – and worst of all, the government’s stubborn refusal to admit responsibility for any of these violent acts. Facing such blatant repression while protesting shoulder-to-shoulder with hundreds of thousands of strangers only served their conviction that “the fall of Mubarak was inevitable,” Abdelrahman said of the final days before the former president’s long-delayed resignation. In the nearly eleven months since then, she has not shied away from criticism of the interim government, whose disappointing performance has precipitated a series of cabinet reshuffles. “The succession of stupid decisions by the government only increased the motivation protesters, as our numbers and passion for the cause have grown immensely,” she said, commenting on persistent and recurring protests in Tahrir Square.

Abdelrahman has made one particularly colorful contribution to the world of activism with her series of YouTube ‘mini-segments’ dubbed “Walla Eih?” (“Or What?”).  These self-produced videos offer a refreshing new perspective in political commentary circles, blending comical sarcasm with bold inquiries into issues previously sidestepped by more cautious Egyptian media. Her video blog (vlog) series directly confronts various controversial issues that were previously absent from public debates, such as sexual harassment and the notorious State Security apparatus. Along with these hard-hitting social issues, Abdelrahman’s videos also bring to light the latest buzz from the activist scene, such as the heated and fast-moving debates over the March Constitutional Referendum and rumors of a counter-revolution that were boiling below the surface of the formal political arena. The series —produced from scratch by. Abdelrahman with the help of her friend, Hani Eskander – have recorded an average of around 24,000 views with the second episode – largely inspired by Mubarak’s dramatic resignation – clocking an impressive 56,000 views. In fact, Abdelrahman attributes the original inspiration for her video series to the former president’s long-awaited departure. Thinking back to Omar Suleiman’s announcement on February 11, Abdelrahman recalls, “I was in denial for 45 minutes, then I was overcome with happiness and felt a new sense of empowerment, and that was what eventually made me start my vlog.” In recognition of her work, Abdelrahman received the the 2011 Edberg Award “for her use of social media in a crucial time for Egypt and the Middle East.” When asked what she hopes her vlogs will eventually achieve, her answer was short and simple: “social change.”

Even before her directorial debut on YouTube, Abdelrahman initially made an impression on the Egyptian public as an actress on the big screen in the Egyptian adaptation of Groundhog Day, “Alf Mabrook”. In this pre-revolutionary film, Abdelrahman played the main character’s sister, and won many plaudits for her role in the film, eventually going on to play other roles on Egyptian TV.

Understandably though, Abdelrahman’s acting career has taken a back seat to the continuing push for change in Egypt, as she warns that “the Supreme Council of the Armed Forces (SCAF) are merely and extension of the old regime, and we still have a hefty battle on our hands.” Watching Egypt’s military leaders consolidate power over the last 10 months, Abdelrahman is deeply skeptical of the SCAF’s pledge to transfer authority back to civilian leaders after a presidential election by July 2011. In addition to its poor management of the political transition and economy, Abdelrahman notes that the SCAF has deployed many of the former regime’s favorite tactics, “such as controlling the media, using the ‘divide and conquer’ game, in addition to the ridiculous number of military trials for civilians.” Although the first two phases of the elections have resulted in a big win for the Freedom and Justice Party and sparking a panicked response from the liberal camp, Abdelrahman was not too concerned about the possibility of Islamists holding as many as 70 percent of the parliamentary seats, as long as they deliver political change and economic relief. “I do not suffer from Islamophobia, and am only concerned with what they can provide socially, economically, and politically.” Her biggest concern is that the SCAF will continue to monopolize power and resist necessary reforms to protect the independence of the judiciary and the restricting of the Interior Ministry under civilian leadership.

In spite of all the challenges that lie ahead, Abdelrahman is certain that change will eventually come: “I have faith in myself, and my generation. We are still young and the road to a better Egypt will be long and very difficult, but we have already been through so much and it has only made us stronger. We have finally got our voices back and don’t plan on losing them any time soon.”  Her contagious optimism and confidence will provide much-needed momentum for the long and difficult transition ahead.