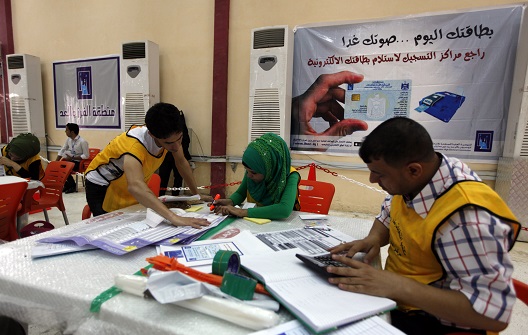 With the results of the national elections announced by the electoral commission last week, the process of forming the next government in Iraq is now underway. Much is at stake for multiple parties and personalities, but no other individual has more to lose than the current prime minister, Nouri al-Maliki, who is adamant on securing a third term in office. By capturing 95 seats out of the 328-seat parliament, Maliki’s coalition is well positioned to retain the premiership. Nevertheless, a third term for Maliki is not a foregone conclusion.

While the United States believes it had significant influence in forming the 2010 government, the real kingmaker was Iran’s behind-the-scenes gamesmanship, led by Qassem Suleimani, the commander of its Qods Force. Today, that kingmaker mantle remains with Tehran, perhaps even more so following the US military’s withdrawal from Iraq in 2011. Indeed, it is highly unlikely, if not implausible, for Iraq’s next prime minister to emerge without having the sponsorship or, at the very least, the blessing of Iran’s leadership.

Iran’s goal is to maintain its influence in Iraq in order to both secure and advance its political, security, and economic interests. Its baseline strategy vis-a-vis Iraq’s post-election gamesmanship is the unification of the Shia political class. Iran’s electioneering strategy reflects a hub-and-spoke model, in which it is at the center. Indeed, Tehran does not enter the electoral game by only backing a single political faction against others; it essentially backs all Shia factions in order to secure a strong degree of patron-client dependency.

It is a mistake to assume that Iran has made its ultimate decision on which individual to back for the premiership. Despite Maliki having spent his years in exile in Syria and Iran, Tehran only views his function through the lens of its own interests. Nevertheless, it is necessary to look at how Iran approached the previous government formation crisis, a deadlock that lasted nine-months following the March 2010 general elections.

In the 2005 election cycle, Iran fostered the pan-Shia coalition—the United Iraqi Alliance (UIA)—which by itself, nearly held majority representation in Iraq’s parliament. However, in the run up to the 2010 election, Iran’s attempt to reconstitute the UIA had failed. Disagreements among the Shia parties over which individual would lead a pan-Shia coalition had prevented their convergence into a singular electoral bloc. Resistance toward a second Maliki term had led to two rival Shia blocs competing in the 2010 elections: Maliki’s State of Law (SOL) coalition and the Iraqi National Alliance (INA), which included the parties of the Shia clerics Muqtada al-Sadr and Ammar al-Hakim, traditional rivals, but anti-Maliki allies.

Thus, the split within the Shia Islamist political class in 2010 allowed room for Iraqiyya—a cross-sectarian list backed by Iranian rivals Turkey and Saudi Arabia—to gain more seats than any other electoral bloc. In an effort for the Shia Islamists and Iran to regain footing against Iraqiyya, the two rival Shia blocs—SOL and INA—merged months after the election into a super-bloc called the National Coalition. But the merger did not reconcile the major problem between them: Who would lead the new coalition and, by default, become its premier candidate to form the next government?

Maliki was not Iran’s first choice to lead Iraq for a second term in 2010. Instead, it was former Prime Minister Ibrahim al-Ja’afari (2005-6), who served as the symbolic figurehead of the INA. The hope that Maliki would have to yield power to Ja’afari was dashed when State of Law well outperformed the Iraqi National Alliance, gaining 89 to 70 seats. Maliki and his State of Law bloc would gain a critical symbolic mandate in receiving more Shia votes than any other politician or coalition. This outcome made it difficult for Iran to place its support behind another candidate, or behind a candidate from another electoral bloc.

Thus, Tehran shifted its support to Maliki, and lobbied other Shia parties to do the same. However, to the surprise of many observers in Washington, Sadr and Hakim continued to resist Iran’s pressure for months, unwilling to throw their support behind Maliki. In addition, the INA had elevated Adel Abd al-Mahdi—a senior official within Hakim’s party who nearly emerged as prime minister in 2006—as their candidate to lead the National Coalition. In the fall, Sadr caved to Iran’s requests (and cut deals with Maliki) and subsequently announced his support for a second term for the incumbent.

This election cycle, the Shia parties outside Maliki’s coalition appear to be far more resilient in their opposition against a third term for the sitting prime minister. That is of concern to Iran, as it risks deeper fractures within the Shia political class, and therefore, the growing prospect that cross-sectarian alliances with Sunni and Kurdish parties will be at the core of the next governing coalition. Today, Iran faces a dilemma. The unification of the Shia parties will be more difficult to achieve, more so than at any other time in post-Saddam Iraq. Maliki’s strong performance among Shia voters, however, makes it difficult for Tehran to sideline him and back an alternative candidate.

While Iran may be the most powerful actor in influencing Iraq’s government formation process, it cannot dictate its demands unilaterally. It cannot easily ignore Maliki’s dominating position in relation to the rest of the Shia parties. Tehran will initially focus on reconciling and unifying the Shia political class, but its strategy may change should those efforts continually fail to mend the disputes among the Shia parties. Maliki’s political rivals hope to change Tehran’s calculus in backing an alternative candidate, even perhaps agreeing to support politically an individual closer to Iran’s interests than Maliki.

Whether or not Iran will back or oppose Maliki is unclear at this moment, but one fact remains constant: Iran’s decision-making represents the master variable in determining who will lead Iraq.