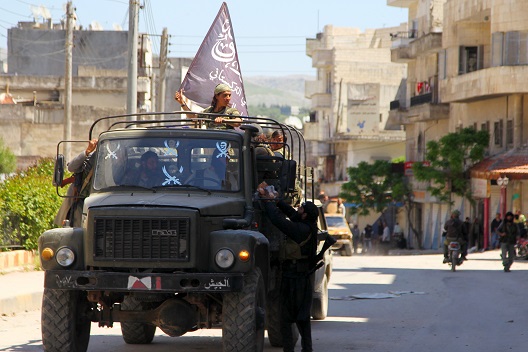 A string of defeats for the regime of President Bashar al-Assad since late March in north and south Syria has broken the stalemate that existed for more than a year and potentially opens up space for the West and its regional partners in the Arab world to pursue a negotiated solution to a war now in its fifth year. However, the interlocutor for a political process is not Syrian President Bashar al-Assad but Iran, the regime’s chief supporter.

Tehran has invested perhaps in excess of $25 billion in financial and military support to keep Assad in power and to secure its strategic interests in the country. Without the intervention of Iran and its regional Shiite allies from Lebanon (Hezbollah), Iraq, and lately Afghanistan, Assad would surely have fallen by now.

But the situation on the ground in Syria has changed at stunning speed. In the south, rebel groups seized Busra al-Sham and the Nassib border crossing and blunted a much-heralded Iranian-led offensive in the Deraa and Quneitra provinces. In the north, a coalition of mainly hardline rebel factions over-ran the provincial capital Idlib followed by Jisr al-Shoghour, a strategic town and gateway to the regime stronghold of Latakia on the Mediterranean coast.

Key to these battlefield successes is a decision by Saudi Arabia, under the leadership of the new monarch King Salman, along with Turkey, Qatar, and Jordan to push back against Iran’s expanding influence in the Arab world. The Saudi-led campaign to crush Houthi rebels in Yemen is the most visible example of an emboldened Arab blowback against Iran. But developments in Syria since late March are no less significant.

Assad has attempted to maintain a military presence across the country in order to convey the impression that his regime is still in control of a unitary state. But a wide deployment of an already overstretched and exhausted army is counter-productive in the long-run, as has become evident in the north and south in the past six weeks.

Iran’s bottom-line strategic interests differ from those of Assad. Iran’s geostrategic priority is to maintain the transport links between Damascus and the Mediterranean coast, particularly the port of Tartous, a strip of territory contiguous to Lebanon and therefore a conduit for the provision of weapons and material support to Hezbollah.

Assad attempted to rally supporters on May 6 by noting that defeat in a battle does not mean the war is lost. But the Syrian government and Iran have some tough choices ahead if they are to prevent further territorial losses. In response to recent pleas from Damascus for more cash ($6 billion requested at the beginning of the year, lowered to $4 billion last month, according to regional diplomats) to save a rapidly collapsing economy, Iran appears to have given preliminary approval to only $1 billion, a possible sign of Iran’s depleted financial budget for Syria. So far, Iran has not committed to deploying more of its own or allied Shia forces to Syria’s bloody battlefields.

If Iran cannot muster significant additional forces to send to Syria, then a shortening of the lines appears inevitable. That would likely mean that Aleppo would have to be abandoned, along with much of the south and the east of the country. Shortening the lines would compensate for the lack of manpower and allow the regime to better defend itself in its core areas. But the loss of Aleppo, Syria’s largest city and the country’s commercial hub, would represent a significant psychological blow to Assad and his supporters. It would badly tarnish Assad’s public expressions of confidence and lend credibility to the view that the regime is in trouble, potentially hastening an internal disintegration.

With Iranian support, the Assad regime could possibly fend off the rebel challenge from a new defensive line for many months or even years. Such a step, however, is a time-buying measure to defer for as long as possible an inevitable fall, a strategy that does little to serve Iran’s long-term interests in Syria.

The opposition has insisted that any negotiated settlement to the war must include Assad’s removal from power, a demand that has been resolutely rejected by the Syrian government and its allies. Iran exerts an unprecedented level of influence in Syria, a result of its colossal financial and military support for the Assad regime. Some observers and diplomats in the region believe that Tehran today carries sufficient weight in Syria to effect Assad’s removal and replace him with someone who could offer up the hope of a negotiated solution. Such a step would probably be backed by the regime’s supporters who would shed few tears for Assad if his departure heralded a chance of ending the conflict with guarantees for their protection.

When President Barack Obama and the leaders of the Gulf Cooperation Council meet this week in Camp David they will have an opportunity to plan how to further squeeze Iran into making such a decision. Saudi Arabia and Turkey would have to ensure that the newfound unity among some of the stronger rebel factions endures and that further military pressure is applied against the Syrian army and its Shia allies. In the remaining weeks before the June 30 deadline for a deal on Iran’s nuclear program, Washington could exploit the negotiations over the speed and scale at which international sanctions are lifted to leverage compliance from Tehran on Syria and Assad’s fate.

It is by no means certain that Iran can be swayed to adopt such a course of action—recent rhetoric in support of Assad suggests not, or at least not yet. But the recent battlefield setbacks for the Assad regime, money and manpower shortages, and the emergence of a seemingly determined de facto anti-Iran alliance of regional Sunni countries suggests that Tehran may have to make some unpalatable choices in the weeks ahead if it is to have any chance of preserving its interests in Syria in the long run.

Nicholas Blanford is a Nonresident Senior Fellow with the Middle East Peace and Security Initiative (MEPSI) at the Atlantic Council’s Brent Scowcroft Center on International Security.