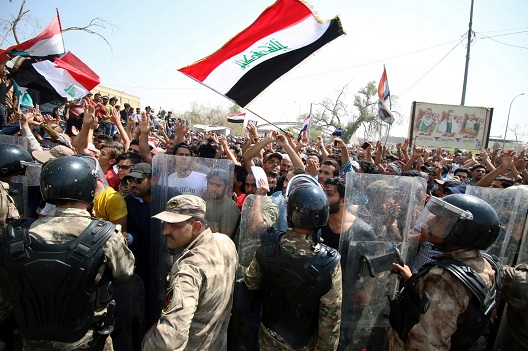 As most headlines continue to focus on US President Donald Trump’s recent meeting with Russia’s President Vladimir Putin and fallout from the NATO summit, Iraq is witnessing some of the largest and most prolonged protests in years. The protests began last week, triggered by water and electricity shortages, unemployment, and government corruption. Despite the growing unrest in a country where the United States has significant interests and forces deployed, there has been little mention of current events in Iraq by American officials or the mainstream media.

The United States’ narrow focus on Iraq’s military and security challenges, particularly pertaining to ISIS, is indicative of current US policy. Military counterterrorism operations devoid of a broader strategy for Iraq discount evidence that economic and social challenges in Iraq are intrinsically linked to the genesis of instability, as demonstrated in a recent report from the Atlantic Council’s Iraq Initiative, Beyond Security: Stabilization, Governance, and Socioeconomic Challenges in Iraq.

The protests over Baghdad’s failure to provide basic services began on July 8 in oil-rich Basra province, mobilized by power cuts, water shortages, and sanitation issues set against the sweltering heat of Iraqi summers. They quickly spread to other provinces in the country’s Shia-majority south as protesters attacked government buildings and stormed Najaf international airport, where at least three civilians were injured in confrontations with police.

On July 14, at least nine security forces and twenty-one protesters were reportedly injured in clashes at government offices in Maysan province, and thirty-six police and six protesters were reportedly injured in Dhi Qar. The next day, Iraqi police used tear gas and water cannons against demonstrators in Basra, and used batons and rubber hoses to disperse protesters outside Zubair oilfield in southern Iraq. The day after that, the protests spread to Baghdad. By July 18, Iraqi health officials reported that eight civilians were killed since the protests began, and sixty others were injured.

In addition to the security forces’ crackdown against protesters, the government cut off internet access in much of Iraq over the weekend. Sources told Amnesty International they believe internet access is being cut off to prevent them from sharing footage and pictures documenting excessive force used by security forces, including the use of live ammunition. Others believe it is an attempt to limit communication between the thousands of demonstrators, similar to the tactic used by regimes during Arab Spring protests in 2011. The government partially restored internet services on Monday, but kept restrictions on social media platforms.

Despite speculation that protests are being encouraged by Iran, they remain mostly anti-Tehran in nature, with protesters burning a billboard of former Iranian Supreme Leader Ayatollah Khomeini. And while various political actors may seek to exploit the unrest for their own gain, the driving force of the protests is the socioeconomic concerns of Iraqis. On July 17, a leadership group formed by activists and tribal leaders in Basra province published a list of demands expressed by the protesters. The first three items on the list were resolution of water and electricity issues, addressing unemployment among youth in Basra, and improving public services, especially health and education.

The socioeconomic grievances triggering unrest in Iraq are largely the result of poor governance. The Iraqi government’s well documented mismanagement of the oil wealth of provinces like Basra, among other concerns about the state’s ability to provide basic services, resulted in its consistent ranking among the most corrupt states in the world. While it has implemented some reforms to satisfy agreements with the International Monetary Fund and the World Bank, the private sector remains weak and the public sector bloated as the government struggles to diversify its economy and reduce dependence on oil.

Despite a positive outlook for overall GDP increase due to an improved security environment and reconstruction investments, most Iraqis do not experience the benefits of their country’s growth. The unequal distribution of wealth and public services results in destabilizing outcomes in neglected areas, such as the frequent power outages and water shortages experienced in Iraq’s south.

In addition to a lack of basic public services due to poor governance, Iraqis are faced with job scarcity and the declining standard of living and lack of social mobility it implies. Due to rampant clientelism and cronyism, government positions are unavailable to most Iraqis, resulting in rising income inequality and unemployment. The youth unemployment rate is especially vexing, estimated at 30 percent and rising. The rapid demographic growth the country is experiencing will only exacerbate the problem.

If neglected, the growing population of educated but unemployed, socially and economically disenfranchised youth frustrated with government inadequacy may lead to greater instability in Iraq and perhaps further radicalization. This is clearly not in the interest of the United States, which has forces deployed in the country and has invested tremendously in combating terrorism there. However, the counter-ISIS campaign has often precluded all other concerns for the country’s security. It is telling that the most recent press release from the US Department of Defense regarding Iraq—on July 17, the same day Iraqi security forces were beating protesters with rubber hoses—concerned the clearing of ISIS militants in northern Iraq.

Meanwhile, when asked about on the Iraq protests during a State Department Press Briefing, Spokesperson Heather Nauert called the protests an “internal” issue and affirmed the right of the Iraqi government to maintain the security of public property. She also deferred questions about tackling corruption. The United States could benefit from a broader strategy for stabilization and peace building in Iraq that addresses the socioeconomic conditions underlying violent conflict and unrest outside of the counter-ISIS fight.

As suggested in a new report by Atlantic Council Nonresident Senior Fellow Dr. Harith Hasan, this strategy could include  US assistance to Iraq contingent on encouraging government reforms that create jobs, develop investments, and reduce corruption. Additionally, the United States could back initiatives to develop human resources and train youth for an economy that thrives on creativity, initiative, and the skills to deal with new technologies—such as USAID’s Iraqi Youth Initiative, which trained more than 3,200 youth to be independent entrepreneurs between 2010 and 2012. To pursue such development goals, the United States could publicly commit to funding stabilization and reconstruction activities in Iraq, which it failed to do at the recent Kuwait pledging conference. As the military fight against ISIS winds down, US policy should shift away from short term security interests to a more nuanced approach that focuses on addressing some of the pressing socioeconomic challenges facing Iraqis daily.

Emily Burchfield is an Assistant Director at the Atlantic Council’s Rafik Hariri Center for the Middle East.