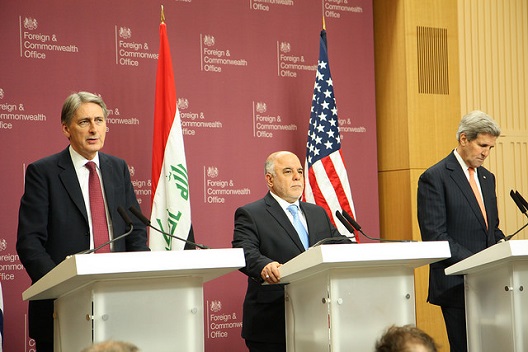 Iraq’s Council of Ministers promulgated a long-gestating law to create a National Guard on February 3. The proposal would create local fighting forces comprised of militias answerable to respective provincial governments and the prime minister. Though the ministry of justice pulled the bill from Iraq’s parliament for further review, most political parties in Iraq agreed to the establishment of the National Guard despite fierce debate over concomitant legislation centered on the country’s “De-Baathification” laws.

A diverse array of Iraqi political parties have welcomed Prime Minister Haider al-Abadi’s decentralized security plan in large part due to the widespread lack of faith in the central government. Recent polling conducted in Iraq reveals that 72.8 percent of Iraqis distrust the central government; among Arab Sunnis this figure is peaks at 94 percent, but distrust remains ubiquitous regardless of sect. While the National Guard plan may help restore the rule of law and confidence in the government, it will undoubtedly lead to other problems.

Since the National Guard concept’s inception, rumors of the composition of Sunni contingents have ignited further suspicion from Iraq’s Shia and Kurdish communities that their old enemies will gain from the proposal. Groups made up of former figures of the Saddam Hussein regime, such as the Army of the Men of the Naqshbandi Order, are included in lists of armed groups that could play a role in the anti-ISIS campaign, despite the deadly role such groups played in Iraq’s disastrous civil war. This is the key reason why proposed amendments to the De-Baathification laws have stalled the realization of the National Guard forces.

Sunni tribes have desperately demanded arms and support from the central government as Islamic State of Iraq and al-Sham (ISIS) forces entrenched themselves throughout Anbar province. While much attention focuses on those tribes that pledged allegiance with ISIS, many tribes that remained defiant were left to fend for themselves, enduring massacres while relying on black market supplies and arms. In the wake of ISIS’s October massacres of the Al-Bu Nimr tribe, the United States moved to arm tribal security forces in spite of the Iraq government’s heel dragging. Jordan similarly committed to arming Sunni tribes in January 2015. However, those tribes still complain that their supplies are inadequate. The UAE cited the lack of sufficient arms for Sunni tribes as a primary reason behind its suspension of airstrikes against ISIS targets in December, only recently resumed.

Meanwhile, many of the Shia militias have a coherency and a broader network that many Sunni groups lack. The Badr Brigades, for instance, date back to the 1980s. Long the recipient of support from Iran, the highly organized group can now boast that the head of its political party, Hadi al-Amiri, is the Minister of Interior. In addition, volunteer cadres referred to as the “Popular Mobilization” began growing in number after Grand Ayatollah Ali al-Sistani called upon Iraqis to fight the ISIS onslaught. Despite Sistani’s success in marshalling fighters, his subsequent calls for said volunteers to respect the rights and property of Sunni communities captured in the counter-offensive has been less successful. In January, reports circulated of a massacre in Diyala province—where Amiri is said to be personally directing security efforts. Reports claim that a mix of official security forces and Shia militiamen allegedly shot approximately seventy-two men in Barwana. Despite Abadi’s pledge to investigate, it is difficult imagine how thorough or successful such an investigation could be with a member of his own government so close to the affair. Additionally, considering the power and autonomy that certain Shia militias now have, it remains unclear if they will recognize the authority of local governors or the prime minister over their current informal hierarchies. The same could be said for Sunni tribal cadres.

The outside forces attempting to bolster competing political factions threaten to deepen the divides currently paralyzing the country. Iraq is obviously no stranger to this dilemma. Iran overtly backs Shia militias with arms and funds and the United States and its allies are committing to arming Sunnis. But without broader political and social reconciliation, these foreign powers might as well pour fuel onto the fire consuming increasingly hostile Iraqi factions.

Iraq’s Ambassador to the United States Lukman Faily declared that Iraq would regain control of all major cities by the end of the year. However, the Iraqi government and its partners have made it known that a ground offensive against ISIS positions is set to begin in the next few weeks. Abadi has pieced together Sunni contingents despite the absence of a legal framework, but any imminent ground effort would require the significant participation of Shia militias. The benefits of a decentralized system would mean that local Iraqis would fight ISIS and secure their own communities, but the reality is that any imminent offensive will fail such a lofty standard. There remains little reason to believe that Sunni communities will be safe after the forces Iraq currently has at its disposal drive ISIS out.

If Ambassador Faily is correct regarding the restoration of Iraq’s territorial integrity within a year, the question remains: what then? The security imbalance between political forces will be difficult to correct safely. Due to equal parts circumstance and choice, Abadi relies on Iranian support and Iran’s proxies have benefitted from the collapse of Iraq’s army. Iran and its allies in the country have little to gain from Iraqi stability or sovereignty and they will not easily cede their recently gained ground. Moreover, the burgeoning semi-irregular armed groups will expect a paycheck from the central government. Failure to sustain them may result in revolt, but maintaining their numbers absent the threat of ISIS could lay the groundwork for internal conflict. Negotiating the aftermath Iraq’s conflict with ISIS will prove just as perilous as their current predicament. It will require a swift, yet precise formula of reconciliation and commitment to Iraqi unity that has heretofore proved elusive.

Adam Simpson is an independent Middle East analyst based in Washington DC.