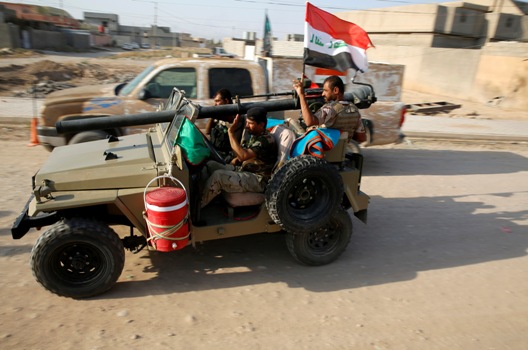 While much of the international media’s attention focuses on the threat posed by the Islamic State (ISIS or ISIL), the more complicated and longer-term problem for Iraq is the resurgence of its Shia militias. The years-long sectarian civil war in Syria provided a strategic logic for the rise of Shia militias in Iraq. As a rejuvenated Sunni insurgency led to the fall of Iraq’s second largest city of Mosul in June 2014 and marched on towards Baghdad and Shia-populated territories, Shia militia counter-movements in southern Iraq had intensified and expanded—presenting a deeper and more complicated problem for Prime Minister Haider al-Abadi.

The regional proxy war in Syria, and the growing convergence between the insurgencies within Syria and Iraq, have created a venue for Shia militias to enhance their membership, renew their cause, and fill their coffers. Unlike ISIS—deemed an outright enemy of the state—Iraq’s Shia militias do not fit neatly into any category, at least across time. At the current moment, Shia militias are an extension of the Iraqi state—with formal and informal political representation in parliament, cooperative ties to foreign powers, and functionally a part of the security apparatus. Indeed, Abadi had even appointed Mohammed al-Ghabban, a senior member of the Badr Organization, home to one of Iraq’s most powerful militias, to head the ministry of interior.

The Iraqi army’s dismal performance directly correlates to the reemergence of militias, which began well before the fall of Mosul. In late 2013, Sunni insurgents took over of the cities of Fallujah and Ramadi, forcing Iranian-backed Shia militiamen to the front lines in Anbar province. Their increased activity helped push Sunni Arabs into the arms of insurgents. Nevertheless, as a matter of military capability, the Iraqi regime came to the believe that Shia militiamen could most effectively combat Sunni militants, especially after the major influx of Shia militias into Syria (Lebanese Hezbollah, Ashab Ahl al-Haq, Kata’ib Hezbollah, among others) had shifted the military balance towards Bashar al-Assad’s favor in combatting his own insurgents.

Currently, the Iraqi government is confronting ISIS and other Sunni insurgents while piggybacking off the presence and strength of Shia militias on the battlefield. Given the collapse of four of the Iraqi army’s fourteen divisions over the summer, Shia militias have become more functionally tied to the state’s security architecture. In addition, the security assistance that Washington provides Baghdad has trickled down to empower those militia forces combatting ISIS. Hence, the power of these Shia militias only grows as a function of fighting the Islamic State.

In general, militia formation emerges in the presence of weak states. But as the state grows in capacity and attempts to reassert its sovereignty, a defining problem then becomes fixated on how to disarm, demobilize, and reintegrate these unofficial forces into an official framework. During the counterinsurgency years, the US military had pushed for Shia militias to be integrated within Iraq’s security forces. Unfortunately, this effort failed to erase the informal network ties, corruption and sectarianism that infested the country’s security apparatus. The attempt to reintegrate Shia militias back into the state’s security framework is unlikely to work a second time around.

However, even if it wanted to confront and stamp out the Shia militias on the battlefield, the Iraqi government does not have the safety net that the US military provided in the past. In the spring of 2008, former Prime Minister Nouri al-Maliki launched a military offensive (“Charge of the Knights”), which aimed at rooting out the firebrand Shia cleric Muqtada al-Sadr’s Jaysh al-Mahdi (Mahdi Army) militia from southern Iraq. Washington had perceived the event as Baghdad’s pivotal shift toward Iraqi nationalism. In reality, Maliki had not suddenly become a nationalist by battling forces of his own sect. Instead, Shia power politics sparked the decision to confront the Mahdi Army and reassert the regime’s control over competing centers of power in Iraq’s security apparatus. During that time, with levels of violence in Iraq rapidly declining, the Sunni insurgency had no longer served as the primary threat against Maliki’s survival.

Today, Abadi appears to be in the same dilemma: dependent on Shia militiamen to counter the threat posed by Sunni militants. Hence, the presence of armed groups is mutually reinforcing: the threat posed by Sunni insurgents perpetuates a logic for Shia militancy, while the threat of Shia militias perpetuates a logic for Sunni militancy. The process of confronting the latter will likely inflate the threat posed by the former. While Baghdad could attempt to tackle both Sunni and Shia armed groups, simultaneously, such a tactic would undoubtedly jeopardize Abadi’s political survival. The new (and weak) prime minister has not yet consolidated his power and remains dependent and constrained by Shia powerbrokers, most especially Iran—a fact of Iraqi political life that is unlikely to change anytime soon. While Abadi may want to face-off with Shia militias at some point in his tenure, one must remember that during the Charge of the Knights, the Iraqi army would have failed in its battle against Mahdi Army militiamen had the US military not intervened to support Maliki’s offensive.

Unfortunately for Abadi, he does not have the benefit of a foreign military occupation to save him. His options to survive and deal with the Shia militia problem are far more limited than his predecessor. Combatting ISIS is not nearly as vexing of a problem than trying to figure out how a weak state dependent on militias will reign them in.

Image: Shia militia fighters drive in a military vehicle towards the the frontline during their fight with Islamic State militants in Al Bohassan village September 3, 2014. REUTERS/Ahmed Jadallah