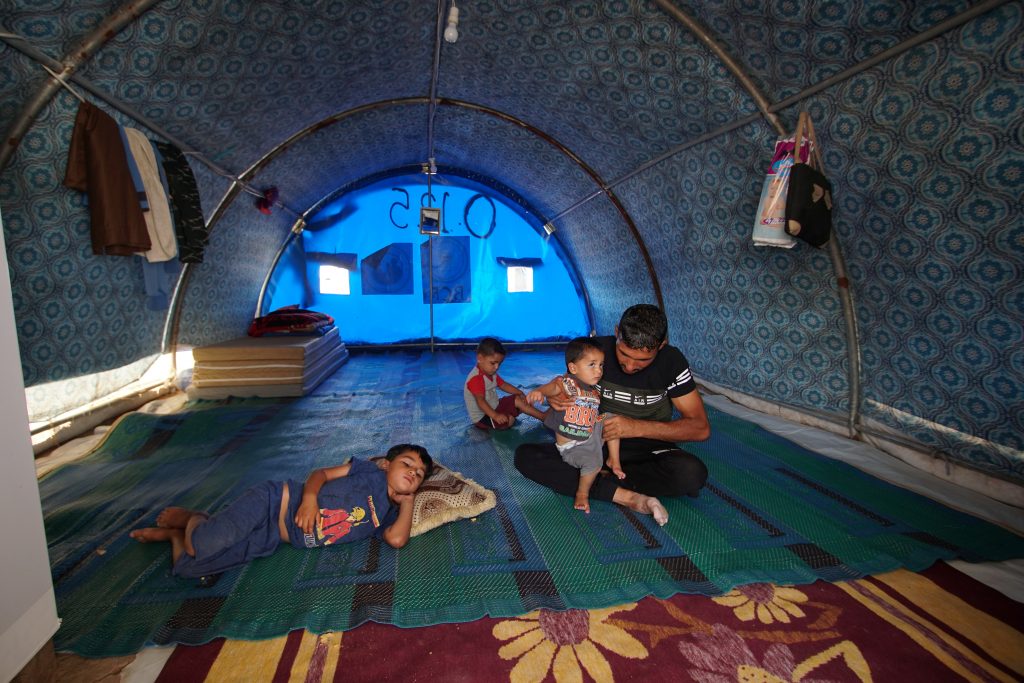 A displaced Iraqi man, who returns to camp after trying to go home and find the conditions in their towns unbearable, with lack of services and destroyed buildings, sits with his children in their tent at al-Khazir refugee camp on the outskirts of Erbil, Iraq, July 23, 2019. Picture taken July 23, 2019. REUTERS/Abdullah Rashid

As Iraq protests in the past week escalated and settled down, real grievances issued by Iraqi citizens—related to crumbling infrastructure, high unemployment, and lack of services—need to be resolved by the government to destabilize the situation. However, there are additional issues concerning the internally displaced people (IDPs) in Iraq who may lack the agency or outlet to do so and are in a far worse situation than aggrieved, but settled Iraqis. In particular, IDPs find themselves—much like the rest of Iraq—at the mercy of ongoing tensions between United States and Iran and changing policies that may impact their livelihood.

The United States’ decision to leave the Joint Comprehensive Plan of Action (JCPOA) in May 2018 reignited the intensity of US-Iranian hostilities, catching Iraq in a crossfire between its two primary backers. Iraqi President Barham Salih was aware of his country’s precarious position when in August, he stated, “We say Iraq first—and we do not want our stability to be squandered. We have had enough of conflicts.” Yet despite Iraq’s best attempts at neutrality, US-Iranian tensions threaten to undermine the progress that Iraq has made, particularly with respect to its 1.96 million internally displaced persons (IDPs).

The almost two million IDPs, which are over one hundred times the United States’ 2020 refugee limit, all live in a country that is 8.5 times smaller than the United States and suffer disproportionately from instability in Iraq. Although the number of Iraqi IDPs has declined in recent years, this progress could be undone if it is forced to abide by the United States’ “maximum pressure” policy on Iran.

This policy would alienate Iraq from its primary source of energy and economic strength, Iran, while also polarizing Iraq’s domestic politics and fueling sectarian displacement campaigns. Realistically, so long as tensions between the United States and Iran continue to rise, Iraq’s people—especially its IDPs—will suffer as a result.

Although the American government wants Iraq to immediately wean itself off Iranian energy imports, Iraq is unable to do so. According to its electricity minister, Iraq would need three years to make itself independent of Iranian imports. Therefore, the United States has offered leniency towards Iraq in exchange for other concessions. The Trump administration is leveraging US financial and military support to negotiate US-Iraqi contracts and demand restrictions on Iran-backed paramilitary groups.

In effect, the United States is still forcing Iraq to take sides, which has disastrous implications for Iraq’s political stability and access to resources. As time passes, it becomes increasingly clear that Iraq’s fate depends on the extent to which it can maintain its precarious neutrality.

Furthermore, if Iraq pursues closer ties with Iran, the American government will be less inclined to maintain its provision of security aid, which has been sustained since the 2003 invasion of Iraq.  In the five years following the official end of the Iraq War, the United States provided Iraq with $6.3 billion in security aid.

In part, American’s sense of obligation to post-2003 Iraq depends heavily on their own perceived national interests; Americans expressed greater collective guilt over harming Iraqis when they focused on how the invasion harmed the United States, and not Iraq alone. If Iraq endangers American interests by associating with Iran, then the United States will be less willing to provide Iraq with security aid. The United States will likely decrease its support of several hundred thousand IDPs and return to its pre-Bush days, before Congress, NGOs, and the general population pressured the government to facilitate Iraqi resettlement.

Iraq cannot afford to forgo its relationship with Iran because negotiated trade deals between the countries subsidize Iraqi IDPs. In the past, trade between the two countries had been valued at $12 billion, and this past March, Iranian President Hassan Rouhani signed several deals with Iraq to boost trade to $20 billion.

This surge comes at a fortuitous time for Iraqi IDPs since the proportion of displaced Iraqis who are reliant on government aid to meet “short-term food and household needs” rose from 1 percent in May 2017 to 33 percent in January 2018. Although IDPs are not major recipients of Iraqi government subsidies, without Iranian trade, they would receive the same proportion of a much smaller economic pie.

Furthermore, Iran controls several resources in Iraq so severed ties would only exacerbate the IDP crisis. Agriculture is both the source of and solution to the issue of IDP unemployment; it creates secure jobs in rural areas that reach vulnerable populations. However, many became climate refugees displaced because there is not enough electricity to fuel their irrigation systems, thereby contributing to the IDP crisis.

In both cases, Iran controls the resources that keep Iraqis from becoming unemployed IDPs. If Iranian energy imports become any less reliable, sustainable jobs will be even more rare and unemployed IDPs—who already suffer disproportionality from a lack of electricity—will be worse off.

Even if Iraq attempts to remain neutral, the escalation between its two chief backers will divert foreign resources and polarize its politics; ultimately harming IDPs. Meanwhile, Iran and the United States will lack the means—and desire—to fund non-political humanitarian organizations while waging a political battle across an international stage.

Iraq, which is still recovering from its war against the Islamic State, remains vulnerable to internal and external pressures. Although it is working hard to insulate itself from regional turmoil by signing energy contracts and fostering diplomacy with other countries in the region, it may not be able to emerge from the US-Iranian rivalry without experiencing domestic turmoil. If Iraq is unable to preserve its precarious neutrality, it risks losing refugee resettlements and aid from the United States, as well as economic and energy imports from Iran.

Even without Iraq’s explicit allegiance to either state, US-Iranian tensions are likely to deepen political polarization between Iraqis supporting and opposing Iran, thereby fueling sectarian conflict and exacerbating the IDP crisis. Despite its best attempts at mitigating the destabilizing effects of a US-Iranian rivalry, Iraq and its IDPs will continue to suffer so long as the tensions persist. Moving forward, both Iran and the United States should pursue policies that mitigate—rather than exacerbate—the problems plaguing their mutual ally.

Leah Hickert is a student at Boston College and a former intern at the Rafik Hariri Center for the Middle East.

Iraq protests: How should the government and the US respond?

This week Iraq has experienced the largest protests to date against Prime Minister Adil Abdul-Mahdi’s government, if not any Iraqi government since the fall of former President Saddam Hussein.

As most headlines continue to focus on US President Donald Trump’s recent meeting with Russia’s President Vladimir Putin and fallout from the NATO summit, Iraq is witnessing some of the largest and most prolonged protests in years. The protests began last week, triggered by water and electricity shortages, unemployment, and government corruption. Despite the growing […]

Will Iraq have an uprising after sixteen years of political, social, and economic disillusionment?

Sixteen years have gone by since the American-led invasion of Iraq in 2003, and the country is still suffering from major unresolved political, economic, and social issues. Even the most pessimistic people in Iraq did not think that the situation would be this dire.