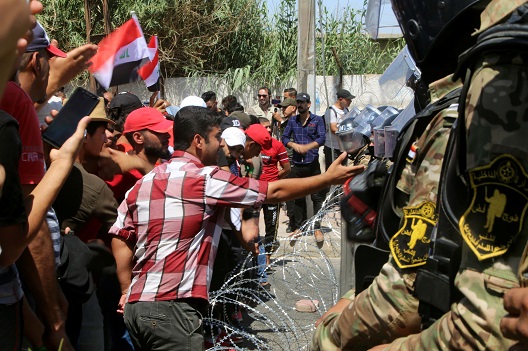 Sixteen years have gone by since the American-led invasion of Iraq in 2003, and the country is still suffering from major unresolved political, economic, and social issues. Even the most pessimistic people in Iraq did not think that the situation would be this dire.

Politicians from all backgrounds are not responding to the challenges the country is facing. Iraq’s current political chaos is also due in large part to the hastily written 2005 constitution. Shia and Kurdish politicians, in particular, teamed up to secure short-term benefits for their respective interests.

The constitution is vague in many respects. The most sensitive issues such as the distribution of oil revenues, the border of the Kurdistan region, the largest electoral bloc that nominates the prime minister, and many other issues are susceptible to different interpretations, which ultimately leads to more division, conflict, and intolerance. Iraq does not need to rewrite the whole constitution, but some parts need to be changed because the status quo only feeds sectarianism and produces corrupt politicians and government officials. The past fourteen years revealed the urgent need for several constitutional amendments to clarify the meaning and scope of federalism, reshape national institutions, revise the electoral system, and reconsider the parliamentary system itself.

Economically, despite the $1 trillion in oil revenue generated since 2005, the level of poverty in Iraq is appalling. Most Iraqis have not benefitted from the country’s oil wealth, but a small percentage of politicians, their families, and their militias have benefited massively. The Iraqi economy remains a rentier one, with oil as the sole dimension, and the government utilizes the oil revenues to pay salaries for nearly three million public sector employees. The private sector remains underdeveloped. There are no effective laws to stimulate private enterprises, so local and international entrepreneurs are left vulnerable to corruption, and once again ordinary Iraqis are shortchanged.

Socially speaking, and despite the major victory the Iraqi army and the Popular Mobilization Forces—backed by a US-led international coalition—achieved against the Islamic State of Iraq and al-Sham (ISIS) in 2017, the lack of trust and apprehension between Iraq’s various communities and the lack of confidence in the central government remain high. Unless the government takes steps to change public perception and social cohesion, its national security will be in danger. The lack of basic services, such as clean water and electricity, in Baghdad and major cities in the south have generated protests that received international press coverage, but have not propelled the government to take concrete steps to address the underlying issues.

Because of this situation, a popular uprising in Iraq is certainly a possibility. Political, economic, and social grievances are considered by many sociologists to be driving factors behind revolutions, and Iraq is at great risk on all three fronts. Social unrest seems inevitable with an estimated 40 percent unemployment rate among young Iraqis who are facing an uncertain future. The state’s failure to create jobs and create an environment that would allow the private sector to thrive and create opportunities for all Iraqis remains a problem. A revolt would not necessarily entail a total change to the system: Iraqis agree that democracy suits their needs. But many voices in Iraq, including some influential leaders such as Muqtada al-Sadr, have called for a peaceful uprising to root out the causes of political, economic, and social chaos and reshape the Iraqi government in a way that will build public confidence.

Aqeel Abood is a sociologist focusing on Iraqi social movements. Follow him @aqeel_abood.