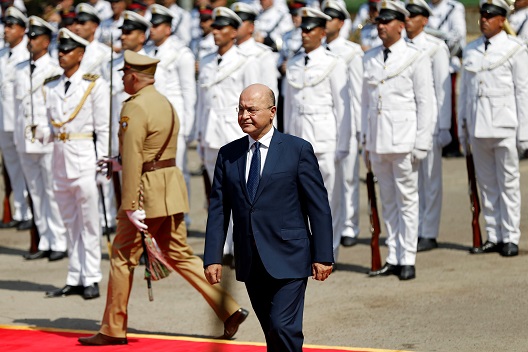 The US-brokered peace treaty between the two parties which ended a multi-year civil war and was signed twenty years ago and updated after the US invasion of Iraq in 2003 with a power-sharing agreement in a unified KRG—an arrangement that also extended to include their role in the central Iraqi government. Under the terms of this agreement the KDP was given the presidency of the KRI, in return the PUK would get the Presidency of Iraq. Barham Salih was elected and sworn in as the new president on October 2. In light of the election outcome and the two parties latest competition over the Iraqi presidency, it remains unclear how the power-sharing arrangement will continue to function between them in the future.

The PUK was allocated the largely symbolic position of the presidency of Iraq, which is reserved for an ethnic Kurd. Jalal Talabani served two terms largely without incident, followed by the incumbent Fuad Masum. The KDP eyed the presidency of Iraq, nominated Fuad Hussein, a veteran politician and former chief of staff to the president of the Kurdistan Regional Government (KRG), while the PUK had put forth Barham Salih.

Salih was elected in the second-round of voting and sworn in as new president. It is worth noting that Salih was only recently convinced to re-join the party after quitting the PUK in 2017 to establish the Coalition of Democracy and Justice (CDJ). The new party fared poorly in the recent Iraqi parliamentary election held in May, and CDJ did not contest in Sunday’s parliamentary elections. Such internal splintering is a growing problem for the PUK, offering an opportunity for the more unified KDP party to advance at the expense of its rival party. Arguably it is this appearance of weakness in the PUK that has the KDP pushing to capture the Iraqi presidency as well as that of the KRI.

Underpinning the political uncertainty generated by the referendum, this election came four years into a protracted economic crisis compounded by political impasse. The decline of oil prices in 2014 and revenue sharing disputes with the national government in Baghdad saw regional economic growth drop dramatically. The KRG responded with austerity measures, including slashing civil servants’ salaries by two thirds, to preclude the near total collapse of the economy and finance the war against the self-styled Islamic State (ISIS). This has not revived the region’s economic outlook, however, and the region continues to witness regular waves of protest. Frustrations are redirected towards ending the threat of ISIS and achieving the historic dream of an independent Kurdistan, but both goals are rapidly losing support.

This election heightened rhetorical combat between the Kurdish two sides, with politicians from each camp accusing the other of “treason” in reference to the post-referendum territorial and military setbacks which have cost both parties dearly. The Iraqi government responded to what it saw as unconstitutional behavior and potentially undermining Iraq’s territorial integrity by reasserting its territorial authority on Kurdish-held ‘disputed territories’, including the oil-rich city of Kirkuk seen by many as Kurdistan’s Jerusalem. More than an economic loss it is also a slap in the face of the Kurdish Peshmerga who have defended Kirkuk since ISIS’ June 2014 assault and the Iraqi Army’s subsequent military defection.

Should the KDP renege on its commitment to the power-sharing arrangement with the PUK, after this week’s drama over Salih’s election ended their pursuit of the presidency, the already fraught conditions in the region run the risk of a return to inter-party hostility and or even separate administrations.

Though the parties constantly bicker, the KDP and PUK remain indispensable to one another. They maintain their own security forces in their respective zones of influence, a partnership which is paramount in sustaining peace, as well as playing a major role in social and economic issues. This partnership kept the balance of power both internally and externally, particularly with neighboring Turkey and Iran along with their local Kurdish populations, but it is now challenged by the ambitions of the KDP and the decline of the PUK.

Such stability is not to be dismissed lightly. August’s cross-border bombardment by Iran was ostensibly a response to protestors storming the country’s consulate in Basra, but was more closely related to political agitation by the exiled Iranian Kurdish political parties based in the KRG. Managing Kurdish relations with the diaspora as well as their respective governments is key to keeping such spats sporadic, but neither party currently has the ability to manage this feat independently.

Worryingly for the PUK, despite the return of CDJ founder Barham Salih to the fold, new rivals continue to arise. Most notable are the Gorran, or “Change Movement,” and the New Generation movements, both of which are gaining crucial footholds in the PUK’s stronghold city of Sulaymaniyah. Gorran, a splinter party from PUK, came second in the last regional election, but was unable to supplant the PUK in KRG’s coalition government. Gorran is now in disarray following the death of its charismatic founder, Nawshirwan Mustafa. Early results indicate Gorran fared poorly in the election, losing half of their 24 seats. Gorran stated that “this election is the last possibility to change things through democratic means,” a clear message to the PUK that it will not accept the sort of election fraud widely seen to have clouded the Iraqi elections.

The New Generation has stepped forward as Gorran has fallen back, the latest anti-establishment movement to express the popular disillusionment towards the ruling duopoly and its aging politicians. The movement’s founder, Shaswar Abdulwahid, earned the moniker of the “Kurdish Trump” partially due to his success in real estate and media, but also due to his political rhetoric. New Generation promises a better future with more jobs and an end to the ruling establishment—it was the only party to run a campaign against last year’s referendum—a message that appeals particularly to the young and the disenfranchised. It has managed to draw open support and pick up swing voters in Sulaymaniyah. The New Generation may have proven to be a dark horse in this election winning around 9 percent of the votes, although it has already seen mild success in the Iraqi elections, winning two seats in the national parliament.

Though the PUK faces more challenges, people are unhappy and cynical with both ruling parties. The KDP managed to maintain its voter base through co-optation and coercion, as its near total monopoly over resources and patronage in its areas of control made many in the region dependent on its for their livelihood. Without internal dissension sapping its strength and undermining its operations, opposition to KDP’s rule has manifested itself in voter apathy rather than support for alternative political parties.

For both parties, internal unity is key to maintaining its support base. The PUK as a party suffers from fragmentation as various groups and politicians internally compete over key economic and security portfolios. As seen with Gorran and CDJ, this fragmentation particularly makes it possible for splinter factions to capture resources and break off as independent parties, while the political confusion opens up space for opposition parties to establish themselves.

Coloring these developments, the low turnout and exit polls indicate the people’s trust in bringing about change through democratic means is at its lowest in the Kurdistan Region. The present hijacking of the political process is due to the hubris and self-interests evident in the independence referendum or the consolidation of regional economic power now in the hands of party elites.

The political impasse of 2015, the war against ISIS, and the fallout of the referendum undermined the region’s commitment to democratic norms and weakened its institutions as Kurdish leaders prioritized security and their own authority over representative governance. People have come to a realization that democracy alone has proven incapable of removing discredited leaders and parties.

It may not be worth preserving the PUK and KDP coalition duopoly, particularly as it currently stands. The time might be right to shift Kurdistan to a new, equally stable but more productive political formulation. But such transitions are fraught, rife with opportunities for bad actors to unexpectedly alter the equation, and there is no guarantee that the KDP will behave well without the check of an equally powerful and well-established party.

Shivan Fazil is a Chevening Scholar and graduate student of Middle East Politics at the School of Oriental and African Studies (SOAS), University of London, he is an alumnus of the East-West Center fellowship program. Follow him on Twitter @ShivanFazil.