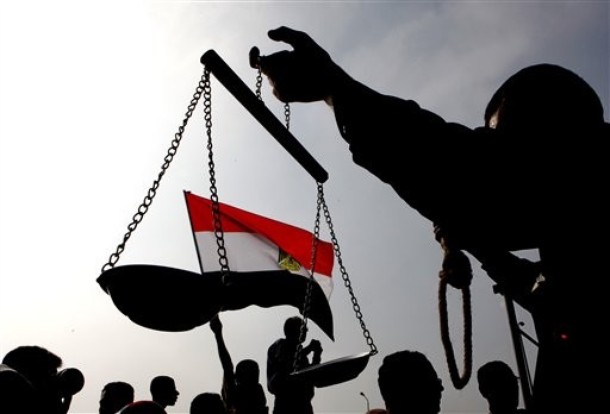 After waiting for more than a year and a half for the verdict in Hosni Mubarak’s trial, Egyptians are now frustrated with the outcome.  In a decision widely viewed as political—issued at a particularly volatile moment in the electoral process—Judge Ahmed Refaat sentenced the former president and former Interior Minister Habib al-Adly to 25 years (a life sentence) in prison, falling short of the prosecution’s demand for the death penalty. Adding insult to injury, the judge acquitted both Gamal and Alaa Mubarak of corruption charges, as well as six of al-Adly’s deputies (charged with killing protesters), citing insufficient evidence. But more than anger at the accused officials, the rulings have sparked outrage at the perceived politicization of the judiciary, believed to be acting in the interests of the former regime and the ruling military council.

Egyptians, outraged by the lenient sentencing and outright exoneration of former regime officials, have returned to Tahrir Square by the thousands. Prominent revolutionary figures including first-round presidential candidates Khaled Ali, Abdel Moneim Aboul Fotouh, and Hamdeen Sabbahi have publicly condemned the verdicts and demanded a retrial. Protesters have gone further, calling for “revolutionary trials” and executions.  Public anger has turned on the judiciary, viewed as a guardian of the status quo and apologist for the crimes of the former regime.

Many members of the judiciary now seem to view themselves as the last pillar of stability in an increasingly turbulent political environment, as the Supreme Constitutional Court (SCC) reviews two high-stakes legal challenges that could upend the electoral process and dissolve Parliament itself.  Sabbahi, Aboul Fotouh and the Brotherhood’s presidential candidate Mohamed Morsi are demanding the enactment of an “isolation law” – already passed by the Islamist-dominated Parliament – that would bar former regime figures, presumably including Ahmed Shafik from running for office.  The isolation law has been put on hold as the Supreme Constitutional Court reviews it. If deemed constitution, the law would likely require the disqualification of Shafik, sending the electoral process back to square one.

Meanwhile, Parliament itself is under threat from a constitutional challenge to the electoral law, which lawyers say gave candidates running on party-lists an unfair advantage over their independent counterparts in the parliamentary elections. On May 6, the SCC announced that it would delay its final ruling for one month, meaning that a decision is due this week. If the electoral law is found to be unconstitutional, the SCAF or newly elected president would have the right to order the dissolution of Parliament and call for new elections.

Parliament, perhaps reacting to the legal challenge to its legitimacy, has gone on the offensive against the judiciary. On May 4, Parliament changed its agenda to discuss the trial of Mubarak and Interior Ministry officials. MPs launched scathing attacks on the judiciary, accusing judges of caving to pressure and interference from the executive branch. MP Essam Sultan went so far as to accuse the interim government of hiding and destroying evidence related to Mubarak’s case.

The independence of the judiciary has been further called into question by a criminal investigation of Abdel Moez Ibrahim, a powerful judge who not only heads the Cairo Court of Appeals but also chaired the committee overseeing the Parliamentary elections and is currently a member of the Supreme Presidential Electoral Commission.

Ibrahim is viewed as a long-time pawn of the Mubarak regime who was responsible for assigning judges to the cases of prominent opposition activists and dissidents such as Ayman Nour and Saad Eddin Ibrahim. He now stands accused of interfering in the work of judges and lifting the travel ban on foreign defendants in the NGO trial, reportedly at the request of the SCAF. Although the probehas reportedly concluded, its outcome has remained shrouded in secrecy, prompting suspicions that the executive branch and judiciary are cooperating to suppress the findings of an investigation that would reflect poorly on both. The case is yet another example of the extent to which the activities and interests of the judiciary and executive are undemocratically intertwined.

The judiciary is not the only body under pressure from the executive branch. Parliamentary Speaker Saad al-Katatny has also accused the interim government of pressuring Parliament to renew the emergency law, which expired last week. However, al-Katatny insists that Parliament not renew the law out of respect for the Egyptian people.

Some MPs, frustrated by the Mubarak verdict and the broader issue of executive interference in judiciary that it represents, are considering joining protests in Tahrir Square. However, others refuse to take their grievances to the street, saying they will seek legal recourse through the system by establishing a new parliamentary committee to explore issues of injustice.

Just as the first Day of Rage was sparked by outrage at an institutional culture of impunity that allowed police officers to get away with murder, protesters are again calling for mass demonstrations in Tahrir Square to demand justice and accountability for state-perpetrated crimes.  The level of anger at the judiciary indicates that Egypt still has a long way to go before rule of law, one of the central objectives of the revolution, is achieved.

Salem Mostafa Kamel is an Egyptian legal advisor to the Carter Center’s office in Cairo and previously worked for the global telecommunications firm, Alcatel-Lucent.

Mara Revkin is the editor of EgyptSource.