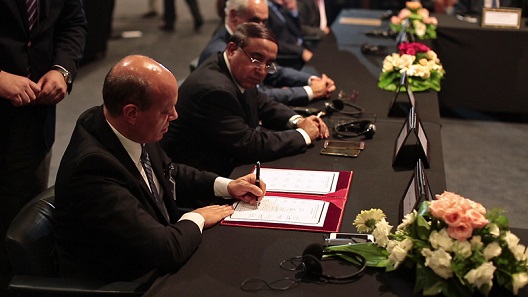 The agreement signed last Saturday by most Libyan factions in the Moroccan city of Skhirat represents an undoubtedly positive step forward, though not one exempt from possible pitfalls and reversals. The agreement arose from an ongoing Libyan political dialogue, moderated by UN Envoy Bernardino Leon, geared toward reaching national reconciliation among warring factions. While the dialogue committee of the General National Conference (GNC), an important faction in Libyan politics, has decided not to initial this agreement, it left open the possibility for signing it should the dialogue participants choose to adopt amendments proposed by GNC delegates. Critics of the present outcome argue that without the full participation of all the factions, the base of consensus is too narrow, leaving the flank open for spoilers. They claim no agreement would have been better than a flawed agreement.

Yet, the conclusion of the negotiations can be seen in a brighter light. One should not interpret the initialing of the agreement as a final deal, but rather understand it as simply the embryo of an agreement. It is a starting point, not a solution in and of itself. With or without the future adherence of the Tripoli GNC, this outcome neither signals the end of the civil war, nor is it a panacea for all the problems of Libya that have accumulated since the revolution. It does, however, mark the beginning of a reversal of the negative trend in which the country has plunged over the last four years.

The main points of the agreement reiterate the view that the House of Representatives in Tobruk serves as the legislative authority and calls for the formation of a government of national accord. The government-to-be has the daunting task of starting the process of rebuilding national institutions and restoring security in the country. Many obstacles will surface along the way. The first and most relevant includes the clash around the choice of personalities that will form this government. Libyan societal dynamics, as constructed by historical and contemporary forces, promote rivalries among personalities, families, and tribes. The resulting competition over position and policy could prevent the formation of this government and doom  the whole process.

Even if different factions can agree on the composition of a unity government, its success will largely rely on the support of the international community. Most international actors have promised their utmost support—including the possibility of a peacekeeping force to be sent to Libya, if and when called for by the new government—to reinforce attaining the goals of its mandate. On the one hand, disagreement among Libyans and foreign observers on the deployment of an international peacekeeping force could hinder or greatly delay such efforts. Many analysts worry that Libyans would view peacekeepers as an occupying force and become the target of terrorist attacks, particularly those conducted by Islamic State (ISIS or ISIL) militants. ISIS has repeatedly expressed its wish for a foreign force to be deployed in Libya, to give a chance for its martyrs to act against it.

It is impossible to think that a newly formed government (even one resulting from wide agreement among factions) would feel confident in its ability to work securely in Tripoli, the capital of Libya. Memories of the Kib and Zeidan governments, which fell prey to the armed pressures of the various militias and their political proxies, loom large in the Libyan psyche. An international armed protection force may provide the only viable means to secure vital institutions and economic installations. In order to develop a functioning and effective government, Libya’s political actors will not only have to accept the support of this peacekeeping force, but also realize the inherent risks in a foreign presence and the inevitability of a confrontation with terrorist organizations, such as ISIS. With spoiler forces in Libya willing to fight against any form of establishment of order and national unity, no other choice remains.

European countries have undoubtedly entertained the idea of such a peacekeeping force. The Europeans have already organized a naval operation to challenge criminal organizations that smuggle migrants through the channel of Sicily into Italy. The Italian government, among others, has taken the lead in proposing a stabilization force to help establish order in Libya and stop the flow of migrants to its shores.

ISIS seems to believe in a European military intervention, so much so that it has bombed the Italian consulate in Cairo as a message. Italy has interpreted this attack as a threat not to intervene in Libya, and the fact that it occurred in Cairo as a challenge to Italy’s support for the regime of Egyptian President Abdel Fattah al-Sisi, who is notoriously inimical to Islamists. Judging from the reactions of Italian politicians, if the purpose was to scare the Italians into withdrawing their support for a peacekeeping force in Libya, this attack has not reached its purpose.

The United States has recently signaled its intent to expand its engagement in Libya by enlarging its drone fleet currently deployed in North Africa. US officials suggest that widening its military presence would support counterterrorism intelligence efforts and operations against ISIS. In reality, despite the Obama administration’s unwillingness to send troops to Libya, it is more than ready to support an eventual peacekeeping operation with its drone capabilities. Operational readiness for this support is a more plausible reason for the urgency with which the Department of Defense has searched for a suitable base for the deployment of its new drones. If the Skhirat Agreement were to lead to a new government within the next month, the United States would not have time to prepare its military surveilling and intelligence equipment. By starting that process now, the United States could be ready to support a peacekeeping operation in the coming months.

The debate over the efficacy of such a peacekeeping force will never be resolved until a UN Security Council resolution authorizes the deployment of troops. Nevertheless, no amount of international support will suffice if Libyans themselves—especially those who signed the agreement in Skhirat—do not build upon all the goodwill and tireless efforts to pull the country out of its crisis and propel it into a positive and constructive future.

Karim Mezran is a Senior Fellow with the Atlantic Council’s Rafik Hariri Center for the Middle East with a focus on North Africa.