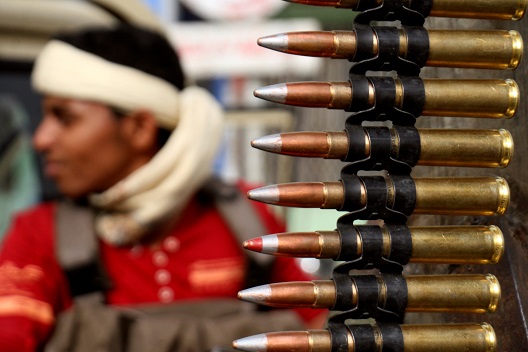 If the definition of insanity is doing something repeatedly and expecting a different result, then the world’s approach to the Yemen conflict amounts to insanity. While the purgatories of the Syrian civil war, global terrorism, and Iraqi sectarianism persist, it is clear that the West has become exhausted with crises in the greater Middle East. However, assuming that the international community is serious about ending the conflict, it is reasonable to ask why an innovative resolution remains out of reach. Perhaps if Saudi Arabia could draw all parties to negotiate a political solution, then Yemen’s civilians could finally find relief. Given its leadership of the Arab Coalition forces in Yemen, this proposal may sound irrational. Yet the true insanity is continuing down a path with little expectation of success.

The conflict is usually presented as a complicated power struggle. On one side, the US-backed Saudi coalition supports the internationally recognized government of Abdrabbo Mansour Hadi. On the other, the Houthi insurgency allied with forces loyal to former President Ali Abdullah Saleh struggle to control large swaths of Houthi-controlled territory. To say that the Yemen’s civil war is ‘complicated’ would be a massive understatement, as the conflict has volatile dynamics at the international, regional, national and local levels. The fissures within each front are deep and the objectives of each party vary widely. Marriages of convenience are the norm.

Beyond the coalition’s two-year-old campaign, observers have also noted the support that Iran has lent the Houthi rebels (though the scale of their assistance to the rebels is often overstated). Jihadist organizations further amplify the chaos. Al Qaeda in the Arabian Peninsula (AQAP, arguably the organization’s most dangerous affiliate) continues to expand its territorial reach in eastern Yemen and overshadows the so-called Islamic State, which declared a wilayah (province) in Yemen in November 2014. Even within each front, the alliances are volatile. Evidence of escalating tensions between the Houthis and Saleh and his loyalists has surfaced and the Hadi-led coalition includes the secessionist Southern Movement (al-Hirak), whose goals are distinct from the Hadi camp. Finally, the recruitment of Yemen’s numerous tribes into the war—often via promises of material gain—has further entrenched the violence as historical conflicts and vendettas find new outlets for reprisal.

As the new US administration reportedly weighs a new Yemen strategy, it is worth considering the end game. The ultimate objective of policymakers should be a peace settlement that relieves the suffering of Yemen’s civilians, 18.8 million of whom are in need of humanitarian assistance and seventeen million of whom are facing an impending famine. Prolonging insecurity in Yemen will only further damage global security interests, as jihadists fill the vacuum of authority. As security and humanitarian conditions further deteriorate, Yemenis will also flee the country, creating a deluge of refugees into wealthier neighbors such as Saudi Arabia and perhaps even Europe.

First and most importantly, policymakers need to recognize that the war in Yemen continues because the belligerents do not yet believe that peace is in their interest. This is why successive peace dialogues since the 2011 political transition have all failed. The Houthis and the Islah Party (the Muslim Brotherhood’s Yemen affiliate)—not to mention Saleh and Hadi—see a potential defeat in existential terms. They each view the war as a zero-sum game. The Houthis believe that the United Nations is only pushing for a military solution on behalf of the Saudis. The Hadi-led negotiators, alternatively, have been skeptical of the Houthis’ willingness to withdraw from the capital and other occupied centers or to abide by any ceasefire. With both sides trapped by cynicism, compromise remains out of reach.

Second, an additional zero-sum game at the regional level further complicates peace efforts. In the proxy war between Saudi Arabia and Iran, Yemen is another battle field, both politically and militarily. To Gulf countries and the United States, a recently emboldened Iran looms as an even greater security threat than an unstable Yemen without a central government to control the jihadist threat and migration. The reality, of course, is that winding down hostilities would restrict Iran’s space to operate in the conflict and restoring governance would diminish jihadist recruitment and territory.

Third, although partisanship and ideology motivate many of the belligerents, so does cash—both from the Yemeni government and outside governments. In addressing the drivers of conflict, it is dishonest to downplay or dismiss the role that abject poverty and economic rivalries play in each side’s recruitment strategy. In a conflict setting with scant economic opportunity, being paid to fight can seem downright rational.

The deep historical roots of the social, economic, and political incentives to fight negate a military-only solution to the conflict. No matter how much effort is devoted to standard UN-led negotiations, peace will require a complete reimagining of the negotiating parameters. As it stands, negotiations continue to fail, not because negotiators have failed to exquisitely align the parties’ interests, but rather because the negotiating pie is not big enough—politically or economically. As the simmering insurgencies throughout much of the Middle East have taught us, conflicts do not simply burn out through exhaustion. The humanitarian stakes are too high to cling to that illusion.

Having their pie and eating it, too

Future negotiations need to focus on changing the local and regional belligerents’ calculus. At both levels, there are three options: raising the cost of conflict, reducing the costs for peace, or some combination of both.

To address local actors’ calculus, raising the costs of conflict could entail dialing up diplomatic pressure with further sanctions on individual high-level officials or intervening to reduce the flow of weapons, supplies, and cash to belligerents. Reducing the costs for peace would prioritize assuaging the political and economic threats that the sides currently perceive. Increasing economic opportunity for average Yemenis is an indispensable tool to undermine drivers of conflict. One idea could be packaged as GCC labor market integration. Yemen is a country of hard-working Arabic speakers who would harmonize well in host Gulf societies. The remittances that Yemeni workers could send home would be a bulwark against the crushing poverty and impending famine that many aid agencies are predicting will inevitably drive more men into conflict. Additionally, Gulf (and other) countries could concentrate investments in labor-intensive industries in Yemen. Whether the solution features one or both of these proposals, more working Yemenis means fewer fighting Yemenis.

To address regional dynamics, Saudi Arabia should pivot from its role as a major combatant to that of a mediator. Replacing the UN mediators would reinvigorate negotiations and reanimate the peace process. Throughout the long succession of conflicts in Yemen—from civil to tribal wars—a third-party mediator has always been a precondition for peace. To solve the current civil war, perhaps it is worth hearkening back to the 1960s civil war in which Egypt supported the republicans and Saudi Arabia backed the monarchists. After several bloody years, Saudi Arabia extricated itself from the hostilities and negotiated a political end to the conflict.

Although it will be difficult for the kingdom to reconfigure its role, all sides recognize that in the long term their interests will converge in a united opposition to the extremists gaining ground in Yemen. The Houthis recognize that regardless of the outcome of the war, Saudi Arabia will remain a regional power, and private discussion of a Saudi-initiated arbitration. The kingdom’s recent signal that it will consider a political solution to take back the strategic Hodeidah port is an encouraging step, though of course the port is just one element in the larger conflict. However, time is running short for Yemen’s civilians, and the deeper Saudi Arabia is drawn into the conflict, the more difficulty it will have repositioning itself as a mediator.

If Saudi Arabia is unable to fulfill this role, perhaps history could invert itself and Egypt could take on the role of mediator. Given Egypt’s desire to emerge as a regional leader and its careful diplomatic balance toward both Saudi Arabia and Iran, Egypt may have the credibility to be as neutral a negotiator as the region can offer. Egypt’s tepid support of the Saudi-led campaign has already been a signal that the state—usually a vocal ally of Saudi Arabia—may be open to persuasion to act on this policy difference. Additionally, Egypt’s diplomatic relationship with the Houthis implies some degree of goodwill: many Houthi leaders live in and visit the country regularly, especially since the war has made Yemen so unsafe for many families.

Again, the point is not that there is some mystical negotiating formula waiting to be discovered. If the regional and international players are serious about bringing peace to Yemen, neither history nor prejudice ought to preempt any opportunity. Rather than allowing Yemen to spiral into another Syria, all sides must reject complacency and repetition. Peace will only result when all these disparate actors have both the incentive and the assurance of security to lay down their arms and participate in a national reconciliation that is accepted and supported by regional powers.  By this point it is clear that only creativity will be sufficient to bring the parties together. And while detractors may deny the rationality of new negotiations, it should be clear that the only insanity would be to prolong the suffering of millions of Yemenis trapped in civil war.

Abdulwahab Alkebsi is the Deputy Director of Programs at the Center for International Private Enterprise.

Image: Photo: A pro-government fighter sits on the back of a military truck during clashes with Houthi fighters in the southwestern city of Taiz, Yemen June 2, 2017. REUTERS/Anees Mahyoub