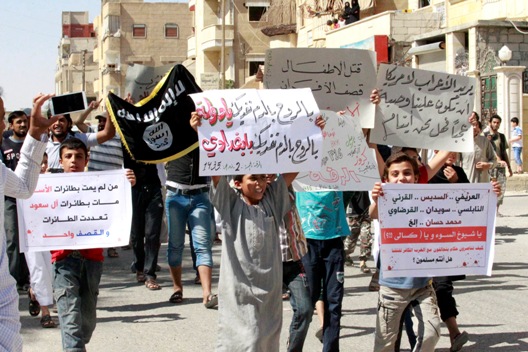 Syria observers have balked at the rapid growth of capabilities and territory acquired by the Islamic State in Iraq al-Sham (ISIS, ISIL, or Islamic State) as it confronts global powers on many fronts. But ISIS’s successes in eastern Syria cannot be explained from a military and ideological standpoint alone.  Its capacity to use the social fragmentation created under the Assad rule can account for many of its advances.

Historically, the Baathist regime has ruled over Syria’s eastern region using a divide-and-conquer policy similarly to the one masterfully applied by the Assads in Lebanon. Power was disseminated according to tribal and ethnic affiliation—the latter factor in particular driving societal divisions in a region where Arabs and Kurds live side by side. However, to understand the rise of ISIS there one must understand the local power dynamics that frequently reflect individual and group calculations.

Although Baath ideology does not recognize religious or tribal affiliation, the Assad regime has blatantly exacerbated these divisions to assert its authority in the eastern region. For instance, the Assad regime sidelined traditional leaders in favor of new ones by granting them high ranking positions in government, public administration, and the security services and bestowing privileges on them, thereby fragmenting the power and authority across tribes. “Ambiguous loyalties are likely tied to the legacy of Hafez al-Assad’s tribal policies, when many local “common” tribal leaders were either being cultivated by the regime as pliant allies—or punished for their refusal to go along—while many transnational “noble” tribes lived outside Syria to escape the regime,” says Dawn Chatty, University Professor in Anthropology and Forced Migration at the University of Oxford and the director of its Refugee Studies Center.

The Syrian regime, in its adherence to arabist ideology, also discriminates against Kurds while maintaining good relations with many of the tribes to the northeast. Successive Syrian governments used land reforms of the 1960-70s to encourage Arab tribes, mainly from Shammar and Tay, to settle in villages along the northern borders built over fertile Kurdish lands to dilute Kurdish majority presence.

In 2004, President Bashar al-Assad appealed to the tribes in its crackdown on a Kurdish uprising in the north east city of Qamishli, following a football match between an Arab team and a Kurdish team, which led to rioting. Tensions between native Kurds on one side and Arab settlers on the other have risen since the start of the 2011 revolution. In the context of an increasingly fragmented and absent state, Kurds began to enforce a policy of Arab marginalization in their regions.

ISIS took full advantage of and exploited these tensions. As the Assad regime had done, ISIS has manipulated local players’ enmity toward one another, using co-option, economic incentives, and terror to create a new network of affiliates.

ISIS’s clout over eastern Syria is thus not necessarily a matter of ideological affinity with the local population, but rather one derived from pragmatic calculations. New alliances are often born of converging interests between the tribes and ISIS, who can defend their interests when confronting rival groups.

Several clans, once considered the regime’s allies, have pledged allegiance to ISIS both in Raqqa and Deir al-Zour, such as Sheikh Hassan al-Bariaj and Sheikh Ali Jabbur, according to one resident (speaking on condition of anonymity). Others such as the al-Afadla tribe, which includes members of the parliament and the Sabkha and Bou Assaf tribes among others, have also aligned with ISIS.

While these new allegiances do not necessarily include every member or sub-tribe, they are often motivated by financial and security reasons. Local activists have highlighted how ISIS’s kidnapping and killing of tribesmen pushed many to join the terror organization to avoid its wrath. ISIS’s wealth has also made collaboration between it and the tribes more profitable. The latter often acquire certain privileges through its alliance, such as the protection of their contraband activity. Control over the oil trade is another powerful incentive for some tribes, as oil production in eastern Syria being an essential source of wealth. ISIS has also successfully mobilized Arab crowds through the use of anti-Kurdish discourse conflating the regime’s shabiha death squads with the Kurdish PKK, as was the case ahead of the battle of Tell Hamis early this year.

ISIS’s local alliances are thus fragile. The most prominent example is that of the Sheitat tribe. The clan revolted against its ISIS rulers, leading to a backlash that resulted in the death over 700 clansmen in Deir al-Zour this summer. While little was said in the media as to what motivated the revolt, two testimonials point to financial disagreements between the tribe and ISIS. French expert Fabrice Balanche, who recently interviewed refugees in Turkey, found that the ISIS ban on cigarette smoking interfered with the Sheitat’s cigarette-smuggling business. A Deir al-Zour resident, speaking on condition of anonymity, also confirmed the disagreement had occurred.

Such incidents underscore the non-ideological motivations that explain the support of ISIS by local communities. These social and economic factors need to be taken into account by policy makers. Any part of an effective strategy aiming at defeating ISIS should consider breaking the bonds of patronage between the organization and the local population.

Mona Alami is a a French Lebanese journalist and nonresident fellow with the Atlantic Council’s Rafik Hariri Center based in Beirut. Follow her on Twitter @monaalami.