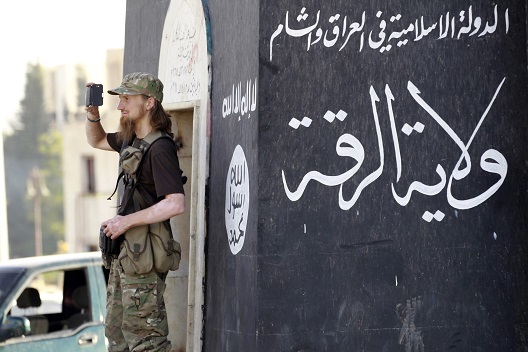 Last summer, the self-proclaimed Islamic State (ISIl or ISIS) consolidated its control over large swaths of Syrian and Iraqi territory. The terrorist nebula has seen a rapid transformation, consolidating its grip through recruitment, fear, and the imposition of social policy in an attempt at governance. From an economic and fiscal perspective, however, ISIS is in trouble. With a sustained counteroffensive limiting its ability to maintain control, oil prices at their lowest in recent memory, and its taxation policy driving inflationary pressures, the terrorist group is facing the economic strain of sustaining its caliphate.

When ISIS first decided to resurrect its version of an Islamic caliphate, it released a message summarizing its objectives: “The people in the lands of the State move about for their livelihood and journeys, feeling safe regarding their lives and wealth … Jizyah (a tax imposed on kuffār) has been enforced. Fay’ (money taken from the kuffār without battle) and zakat (obligatory alms) have been collected … It is the khilafah (caliphate).” In another message in November, ISIS declared it would create a new financial system that would allow it to liberate Muslims from the “tyrannical (Western) financial system.” The two statements point to ISIS’s attempt to reshape its economic environment. It has secured revenues by controlling oil refineries, financial centers, and even announced the creation of its own currency. However, its many endeavors are leading to an increasingly imbalanced economy.

Oil revenues have primarily driven the caliphate’s attempt at state-building. In September, some experts had estimated that ISIS generated $2 to $3 million per day in oil sales, producing approximately 70,000 barrels when the price of oil was $90 a barrel. Four months later, with the US-led military intervention against ISIS destroyed the majority of its oil refineries in Syria. According to the International Energy Agency, ISIS’s oil production has dropped to about 20,000 barrels since the counteroffensive began, accompanying a drop in oil prices of 30 percent (around $60 per barrel). If estimates are accurate, the cumulative blow to ISIS’s oil revenues leaves it with approximately $600,000 per day, with a loss of 70-80 percent of its initial income.

ISIS has also relied on taxes as another source of revenue. The group has imposed taxes from $300 for a load of foodstuffs and $400 for a load of electronics to a flat fee of $800 per truck at various crossings. The Waleed Crossing, for example, which links Jordan to Iraq, and the Tanif Crossing, which links Iraq to Damascus via ISIS-controlled Deir Ezzor and Raqqa in Syria, both have flat fees for commercial vehicles. In other areas in Iraq and Syria, ISIS has also enforced taxes on a variety of commercial activities, including telecommunications. Companies with relay towers in ISIS-controlled zones had to pay taxes or risk retribution. Raqqa’s Credit Bank functions as the city’s tax authority, with employees collecting $20 every two months from business owners in exchange for electricity, water, and security. The same can be said of Mosul where shopkeepers reported paying militants about $700 a year. Indirect taxes, between 10 to 35 percent were also imposed on certain products such as medication.

A mandatory “zakat” (or alms) system has further buoyed ISIS’s revenue stream. In the eastern Syrian city of Mayadin, militants set up checkpoints asking passengers for money—at gunpoint when they resisted. Lastly, ISIS’s plans to mint its own currency–with denominations using gold, silver, and copper round out its measures aim at creating economic governance.

Yet, ISIS has not managed to free areas under their control from the “tyranny” of western financial systems or providing the “caliphate” citizens with “wealth” security as it touted initially. On the contrary, sources in Mosul and Fallujah say that ISIS’s taxation on vehicles entering the city has slowed the city’s supply chains. Phones lines and internet are also down in Mosul. The city is plagued by rampant inflation with prices of staple goods such as food nearly doubling while price of cooking kerosene has quadrupled. In the western Iraqi city of Fallujah, under militant control, residents have started cutting trees for firewood, because kerosene is in such short supply. Energy expert Luay al-Khateeb believes that ISIS needs at least 150,000 barrels of crude a day just to meet local demand. In Mosul and other areas, residents are suffering electricity shortages after privately owned electricity generators stopped operating.

The inflationary trend will worsen in the long run if ISIS’s currency is put in place. ISIS cannot guarantee access to the large quantities of metal necessary for the minting process, nor can it exert control over currency usage ensure that it is not forged or debased, thereby reducing its face value. The precious metals required also subject the currency to unpredictable global market fluctuations.

ISIS’s financial and economic state-building measures aimed at creating an “ideal caliphate” for Muslims are failing, leading to an economy on the brink of tatters. In light of dwindling services to its “nationals,” ISIS overstates the relationship between governing and a formalized racket system, between taxes and extortion. ISIS’s appeal to some Syrian and Iraqis—disgruntled by the policies of PM Nouri Maliki, President al-Bashar Assad, and rival opposition groups—has been in its self-promotion as a state. To sustain that image, critical to its legitimacy, it has to keep up on its promises. The drop in oil prices worldwide hinders that effort. ISIS will have to recant on its system of subsidies such as charity funds, electricity, bread, and wheat, already severely impaired by the disruption in transport due to ISIS’s taxation system, theft, and coalition strikes. Violence alone can keep ISIS running for a while, but its failings will put limitations on how long residents of the caliphate will remain silent.

Mona Alami is a French Lebanese journalist and nonresident fellow with the Atlantic Council’s Rafik Hariri Center based in Beirut. Follow her on Twitter @monaalami.

Image: A militant Islamist fighter uses a mobile to film his fellow fighters taking part in a military parade along the streets of Syria's northern Raqqa province June 30, 2014. (REUTERS)