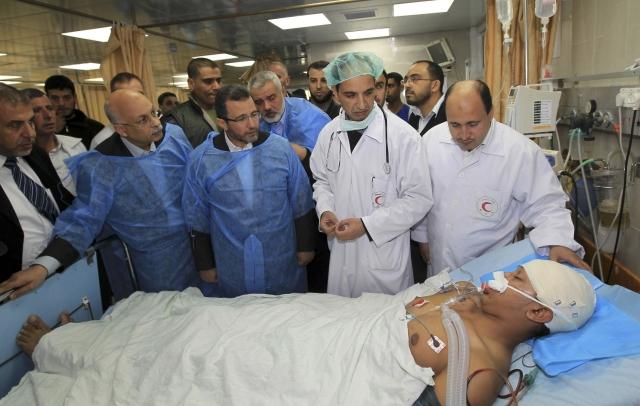 As I peruse the reactions to the Israeli escalation in Gaza, including the killing of Ahmed Jabari, the leader of Hamas’ military wing, a few motivations come to the surface.

The final two points were hammered home in a scathing editorial from Israeli newspaper Haaretz. It argued the assassinated leader was essentially involved in an arrangement between Hamas and Israel that established limited, unofficial ties in exchange for cessation of rocket fire. It is a very interesting analysis, painting the relationship in almost mafia-eque terms.

Yet from my perspective in Egypt, I wonder if the Israeli motivation is to test Cairo more than Hamas. Of course, domestic factors always outweigh international ones. But at the least Tel Aviv may wish to discover what sort of president it faces in Mohamed Morsi, if not seek to discredit him altogether.

Muslim Brotherhood rhetoric during the Mubarak administration was always to harshly condemn the state’s refusal to take decisive action against Israel vis-à-vis Palestine. Yet Mubarak was not shy to issue strong verbal condemnations against Israel, nor did he refrain from withdrawing his ambassador to Tel Aviv. Morsi’s government, to prove consistent, must do more.

But given the limited operating room in a cold peace of anti-normalization, there is not much he can do. There are joint economic activities that can be frozen. There are adjustments to the Camp David Accords that can be demanded. And, there is the peace treaty to annul.

Prime Minister Hisham Qandil’s visit to Gaza marks a slight shift in Egypt’s attitude; however the symbolic gesture was not enough to maintain a tenuous ceasefire in the Gaza Strip. Morsi’s strongly worded statement on Friday carried with it a threatening tone, saying, “We assure them [Israel] that the price will be high for continued aggression, and [we tell them] you have to bear the responsibility,” That said, the statement is accompanied with little to no leverage to place Egypt in a position of power.

Interestingly, the Muslim Brotherhood called for massive protests on Friday, as did every other political force rallying behind Gaza. Opposition to Israel has always been a hallmark of every Egyptian political movement, but it is ironic to see liberal parties now in condemnation of an Islamist presidency’s failure to stand up to Israel. But the Brotherhood is not falling behind: It has called for cutting all ties.

Do they mean it? How much effort will they pour into protest mobilization? Are they forcing the hand of the president? Or are they simply covering themselves should Morsi’s obliged inaction have to be explained away later?

One overriding semi-conspiracy states that Islamists have been welcomed into power in Egypt so that the internal contradictions of the movement will become exposed and rejected by the people. Repression failed and only enhanced their popularity. The only alternative to defeat them is to allow them to defeat themselves.

Perhaps Israel is nudging at one of these contradictions. Morsi and the Brotherhood built their power base on anti-Israeli rhetoric. Yet seeking the approval of the international community and commercial interests also pledged to respect all treaties. There is little wiggle room. If they imitate Mubarak’s outrage they risk losing the people. If they take decisive steps against Tel Aviv they risk losing credibility. Such are the demands of leadership; can they step up to the plate?

The semi-conspiracy mentioned above can be described more simply as democracy. With it comes the risk that Morsi might actually rise to the challenge. If he governs well Egypt may either enjoy, or suffer, a long Brotherhood rule, depending on perspective.

But if the Israeli semi-conspiracy of ‘nudging’ is true, it comes with much greater risk. If Morsi is discredited, who will take his place? Will it be a populist-angling liberal or a more threatening Salafi? There is no shortage of Egyptians who might be rallied to jihad, and a number of demagogues who might issue the call.

In all likelihood the truism holds: All politics is local. Netanyahu faces bigger issues, be they defined as defending his people or winning an election. Yet the ripple effect of this escalation moves far beyond Tel Aviv, Gaza, the Rafah crossing, and even lawless Sinai. It is shaking Cairo’s presidential palace.

Will the tremors pass or the foundation prove unstable? Or, in line with Egypt’s hopes for greater sovereignty, might Morsi find a new path – one that honors both peace and pressure?

Answers await, as the Arab Spring continues to evolve.