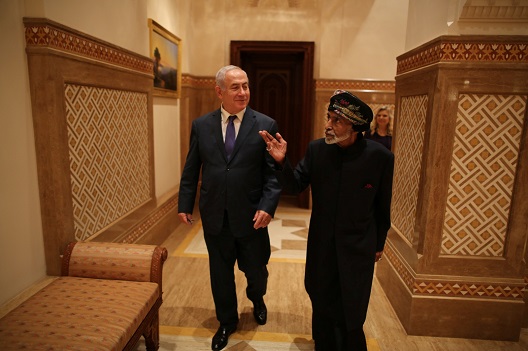 On April 25, the Israeli Ministry of Foreign Affairs announced that an Israeli delegation will take part in next year’s World Expo, hosted by the United Arab Emirates (UAE) in Dubai. Prime Minister Benjamin Netanyahu, fresh off his victory in the April 9 elections, tweeted his approval of Israel’s participation, which he called “another expression of Israel’s rising status in the world and the region.” The idea of Israeli innovators showcasing their achievements in the Gulf would have been hard to imagine not long ago. Today, it turns few heads.

This latest public sign of détente builds on years of diplomatic progress between Arab Gulf states and Israel. Under Netanyahu’s second premiership—beginning in 2009—Jerusalem has sought closer ties with the Gulf’s conservative monarchies. Netanyahu secured an audience with Sultan Qaboos of Oman during an official visit last fall and met the Omani foreign minister in Washington early this year. Bahrain, too, has long had covert talks with Israel and could be close to normalizing relations. Regional giant Saudi Arabia has also cooperated with Israel on different levels. Riyadh reportedly supported Israel’s offensive against Hamas during the 2014 Gaza war, while Jerusalem in turn greenlit the sale of German tanks to the Saudis.

Once an open secret, these relationships are now all but overt and serve to enhance Israel’s regional standing. Yet proclamations of a supposed “new era” in Israeli-Gulf relations exaggerate the extent to which ties have improved. Although Israel and the Gulf states are getting closer, it is unclear where these relationships are heading.

Government-to-government contact with Israel by Gulf states is a sharp break with longstanding policy in the Arab world. Following Israel’s decisive victory in the Six-Day War of 1967, the Arab League pledged to oppose recognition of, as well as negotiation with, Israel. Though Gulf states did not follow the lead of Egypt and Jordan in signing peace treaties with Israel, relations were semi-normalized by Oman and Bahrain after the Oslo Accords in 1994. Israel likely would have secured diplomatic breakthroughs with other Gulf states had the peace process succeeded. Yet all this came to a halt with the outbreak of the Second Intifada in 2000, when budding relations were severed.

Shared stakes in curbing Iranian aggression will drive these relationships for the foreseeable future. Iranian Foreign Minister Javad Zarif referred to Israel in conjunction with Saudi Arabia and the UAE as Iran’s adversaries during a Fox News interview that aired on April 28. Jerusalem sees an existential threat in the “death to Israel” chanting Iranian regime, while the Gulf states view Tehran’s influence as destabilizing to the region and beyond. Opposing a common foe has brought Israel and the Gulf states into a tenuous strategic alliance. At least for now.

Strategic interest can take Israeli-Gulf ties only so far. The biggest obstacle to full normalization of relations remains the Palestinian issue. Consider Israeli-Egyptian relations. Although Jerusalem and Cairo maintain extensive security cooperation, in other areas, such as person-to-person contacts, relations are poor. A 2015 poll found that Egyptians considered Israel the most hostile country, just ahead of the United States and Iran. A similar “cold peace” is likely to take shape between Israel and the Gulf states whereby Jerusalem has extensive ties to the governments but Israelis are viewed overwhelmingly in a negative light by the local population.

Unless the stagnant peace process gets a new lease on life, security will be far and away the most robust area of cooperation between Israel and the Gulf. Therein lies a wasted opportunity. These countries could expand ties in a wide array of areas, chief among them economic relations. Lagging behind on measures of innovation, oil-rich Gulf states could invest in research and development opportunities with Israel while taking advantage of its renowned high-tech sector. Sustainability would be a particularly important area of cooperation, as Israeli environmental innovation could help address challenges like water shortages. The Gulf could conversely serve as an attractive destination for Israeli firms seeking foreign markets.

In addition to economic ties, person-to-person relations also have enormous potential. Israel offers several world-class universities, which have all tried to expand international enrollment—there’s no reason to believe students from the Gulf couldn’t fill some of those spots. Tourism could further bridge the gap between these countries. Hundreds of thousands of Israelis visit Turkey every year, and similar numbers of Israelis heading to the Gulf would not be unimaginable given grand plans for tourism there. Citizens from the Gulf could also visit Israel, whose tourism industry raked in $6.3 billion last year. Expanding—and diversifying—relations would be in the interests of both Israel and the Gulf states.

Also rendering a peace settlement more and more unworkable are the 42 percent of Israelis who now favor annexing the West Bank and the proliferation of Israeli settlements in that territory. The result is the lowest levels of support for a two-state solution in two decades. It’s difficult to imagine Gulf states embracing Israel openly if prospects for a two-state solution disintegrate.

Next year’s expo in Dubai may or may not mark an inflection point in Israeli-Gulf relations. Both sides have shown a willingness to engage more with the other. However, much can change in a year, and this is but one signal of potential change. It remains to be seen what shape this engagement will take going forward and if any significant policy changes follow. The United States should step in by leveraging its close relationships with both sides to push for stronger cooperation across many areas, not just security.

Daniel J. Samet is a program assistant with the Middle East Programs.