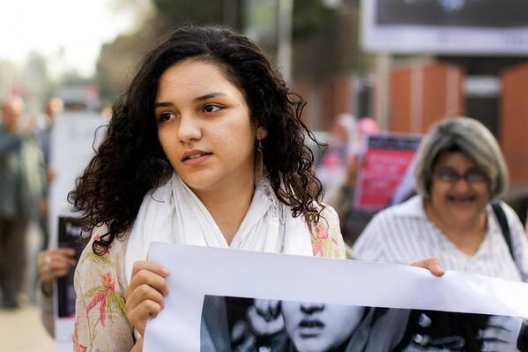 A two-year prison term issued by a Cairo Appeals Court on December 28 against twenty-three activists is likely to have a negative impact among youth on the upcoming parliament elections. Convicted with organizing an illegal protest in front of the Ittihadeya Presidential Palace in Heliopolis six months ago, the activists were sentenced on the basis of a restrictive protest law passed last November. With elections due to be held in early 2015, the verdict has thrown a shadow of doubt on the participation of secular revolutionary youth at the ballot boxes.

The case attracted significant attention because its defendants included seven young women, among them human rights activist, Yara Salam, and Sanaa Seif, the sister of Alaa Abdel Fattah, a prominent government critic who is currently in prison himself. In late October, a first degree court sentenced all twenty-three defendants to three years prison, three years under police supervision (which means registering at an Egyptian police station on a daily basis), and fined them 10,000 Egyptian pounds each.

Several political parties, human rights organizations, women groups and prominent columnists have repeatedly called on President Abdel-Fattah al-Sisi to pardon the young defendants, and to amend the protest law which led to their imprisonment. The law, issued last November, gives the interior ministry wide powers to ban peaceful protests, and imposes harsh penalties ranging from two to five years in jail for violators.

However, on December 28, after the twenty-three defendants had already spent over six months in prison, an appeals court reduced the sentence from three to two years in prison, and following that, two years under police supervision. While the sentencing was meant to be held at the Abbasiya court, located in a crowded neighborhood, the judges decided at the last minute to move the session to the highly secured Police Academy building on the outskirts of Cairo, where former Presidents Hosni Mubarak and Mohamed Morsi were being tried. The session, which lasted a few minutes, was attended by a few lawyers and family members. After the verdict was read, the defendants were quickly escorted out of the court cage back to prison.

Several local newspapers quoted Sisi as saying he was unhappy that young Egyptian women were kept in prison, but he could not interfere in the judicial process, echoing earlier statements made about three Al Jazeera journalists jailed for up to ten years in prison. However, Emad Hussein, editor-in-chief of the independent daily Al-Shorouk, revealed that Sisi might be willing to use his powers as president and pardon the defendants, especially the young seven girls, after a final sentence had been issued. Sisi himself asked the Interior ministry to review the cases of prisoners arrested at protests, going so far as to say that there were “innocent” detainees among them. Practically, the case can still be appealed in front of the highest Court of Cassation. However, according to Laila Soueif, Sanaa’s mother, this lengthy legal procedure could take up to a year, after which the defendants would have almost finished their prison term.

“Instead of the government treating as partners those who provided key support for the June 30, 2013 protests, and the Brotherhood’s removal, many young democracy activists now find themselves in prison,” said Amr al-Shobky, a political researcher and a former parliamentary member who also took part in drafting the post-Morsi constitution.  “Insisting on keeping the protest law unchanged, and continuing to send young men and women to prison for long sentences can only weaken this June 30 partnership, and takes us back to the period of time under Mubarak when youth would not take part in politics because they don’t trust they system,” Shobky told EgyptSource.

Khaled Ali, a lawyer and a former leftist presidential candidate, won a case in the Administrative Court allowing him to challenge the protest law before the Constitutional Court. However, by the time the country’s highest court rules in Ali’s case, dozens of activists will continue to languish in prison. The amendment of the law does not appear to be a priority for Minister of Justice, Mahfouz Saber. In statements in late December, he said the government would wait for the Constitutional Court to rule on Ali’s case. He also pointed to the fact that the next elected parliament could also look into its amendment. Saber added he believed the law was proving to be effective, judging by the smaller number of protests and demonstrations in recent months.

For young members of the Dostour Party, the Karama Party, the Popular Current, and the Popular Socialist Alliance, as well as the April 6 Youth Movement and the Revolutionary Socialists, the latest sentences are indicative that the government is not planning to hold free and fair parliamentary elections.  Mohamed Kamal, a leading 6 April Movement member, told EgyptSource,  “The repeated sentences against revolutionary activists only confirm to us that we are facing a security state that intentionally wants to discourage youth from taking part in politics. These are the same policies of Mubarak security state.”

Amr Shalaby, a member of Dostour Party said that three of his colleagues were among the twenty-three defendants. Shalaby admits that the prison sentences against young activists is pushing many of the party’s younger ranks to boycott the upcoming parliament elections. Shalaby adds, “How can we trust the fairness of elections held under judicial supervision if those same judges are issuing harsh prison sentences against us.”