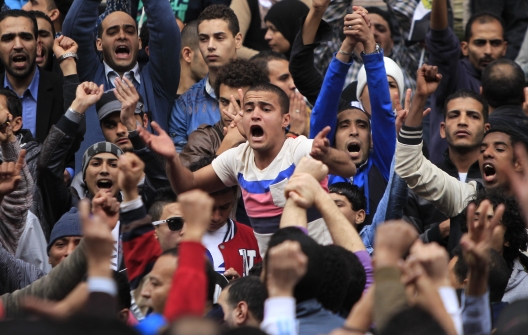 Photo: Anti-government protesters shout slogans against the military and interior ministry during a protest in front of the journalists' syndicate in Cairo January 25, 2015. (Reuters)

In the days leading up to the four year anniversary of Egypt’s January 25 uprising, at least two protesters were killed, among them activist Shaimaa al-Sabbagh. The death toll spiked on the anniversary itself, with over twenty killed and close to 100 injured. Violence was also witnessed in parts of the country in the form of attacks on police officers, electricity pylons, and railway lines. Below is a rundown of the violence Egypt witnessed over the January 25 weekend.

Photo: A woman crosses Tahrir square’s entrance, which is blocked by armored vehicles and barbed wire, during the fourth anniversary of the 2011 uprising (Reuters)

January 25
Twenty-three people were killed on January 25, and ninety-seven were injured according to Egypt’s ministry of health. At least three policemen were among those killed, and nineteen of those injured were members of the security force.

Protests took place in several places in Cairo including Matariya, which witnessed fierce clashes. Protests also took place in downtown Cairo, in front of the press syndicate, which was dispersed by security forces, and in Ain Shams.

Alexandria: Six were killed in Alexandria. A ministry of interior statement claimed that an armed “Muslim Brotherhood protester” was killed after shooting “randomly” at people with an automatic rifle. The Brotherhood’s Freedom and Justice Party said he was killed by “army bullets.”
Mattariya: At least twelve killed in protests including one policeman as well as a member of a famous Egyptian rap group.
Haram: Two policeman were killed in drive-by shooting.
Beheira: Two militants were killed while planting an IED.

Photo: The aftermath of clashes in Matariya
January 24

Shaimaa al-Sabbagh, an activist and member of the Socialist Popular Alliance, was fatally shot in downtown Cairo on January 24. Sabbagh was in a small march heading to Tahrir Square to lay flowers in commemoration of the January 25 anniversary when she was shot in the back.

Photo: Socialist Popular Alliance Party activist Shaimaa al-Sabbagh receives help after she was shot during a protest by the party in Cairo January 24, 2015. (Youm 7)

The Socialist Popular Alliance accused police of premeditated murder, while the interior ministry spokesman said police did not fire gunshots at the march, and blamed her death on the outlawed Muslim Brotherhood.

Egypt’s Prosecutor General Hisham Barakat and Prime Minister Ibrahim Mahlab both ordered investigations into Sabbagh’s death. Interior Minister Mohamed Ibrahim, meanwhile, offered his condolences to Sabbagh’s family and said that police were cooperating with the investigation. He also said that if the involvement of police personnel in her death is proven, he will personally “hand him in to be tried.”

Security forces arrested six protesters at the march, among them the secretary general of the party. They were later released. Five members of the party went to the police station voluntarily to provide their eyewitness testimony but said they were questioned as suspects before being released.

Sabbagh’s death was widely condemned by local political parties and in the media.

A microbus driver also died on Saturday in Giza. Muslim Brotherhood protesters were clashing with security forces when Wassim Abdel-Gaber passed through the area and is believed to have been killed by a stray bullet.

Prosecutors have begun investigating forty-three defendants who were arrested in Mattariya.

Attacks on the Media

According to the Egyptian NGO Journalists Against Torture Observatory (JATO), at least twenty-five journalists were harassed or detained while covering the January 25 anniversary. The Association for Freedom of Thought and Expression (AFTE) said on Sunday that eight journalists were arrested on January 25.

Journalists Ahmed and Mahmoud al-Kaoud were detained in the early hours of Sunday morning when police raided their home. They were released later in the day.

BBC journalist Orla Guerlin reported on Twitter that she was threatened by security forces in Cairo’s Ain Shams:

In Ain Shams where police searching for brotherhood protestors. Cop in plain clothes says if we keep filming we will be shot. #Cairo

Freelance journalist Ester Meerman was briefly detained by police in downtown Cairo while recording a voiceover in an empty side street.

Ok the problem is my H4N sound recorder because it is a ‘strange device’. pic.twitter.com/CBcy9xC7cC

January 23
In addition to the two police officers killed in Haram, four policemen and a civilian were injured in Alf Maskan on Friday, when an IED detonated under a car. The area in which the attack took place is known for its police presence.

Human Rights Watch issued a statement on Monday condemning the violence, as well as the deaths of Sabbagh and Abu Bakr. “Four years after Egypt’s revolution, police are still killing protesters on a regular basis,” the statement read.

The European Union’s High Representative Federica Mogherini called on all parties to “show restraint.” In a statement issued on Sunday, Mogherini said “Freedom of peaceful demonstration must be safeguarded and dialogue is the only way forward.”