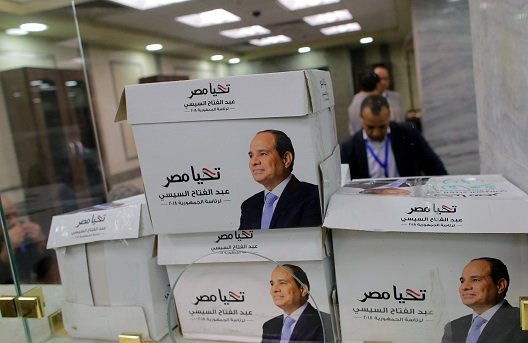 We asked several Egypt experts where they think Egypt stands seven years after the January 25, 2011 uprising that led to the ouster of former President Hosni Mubarak. A common takeaway has been that Egypt is continuing to regress to its pre-2011 days.

Economy
In the aftermath of the 2011 Revolution, the Egyptian economy went into a tailspin for several years. Economic growth plummeted, unemployment, and particularly youth unemployment, rose sharply, inflation went into double digits, and the Central Bank of Egypt lost two-thirds of its foreign exchange reserves. There were some signs of a recovery in 2015-2016, but the improvements in the main macroeconomic variables were small and well below what had been achieved in the last few years of the Hosni Mubarak regime. More positive change occurred in 2017 on two fronts: first, growth picked up and reached over 5 percent after having averaged 2-3 percent in the previous six or so years; and second, the Central Bank of Egypt built back up its foreign reserves to over $37 billion, even above the historical high of $35 billion in 2010. However, on the downside, inflation surged and there was virtually no impact on the unemployment, which remained stubbornly at around 13 percent.

It is fair to say that Egypt has achieved a high degree of macroeconomic stability—a necessary condition for sustained high growth. The improvement in the macroeconomic picture is primarily due to a series of major government policy actions with the support of a three-year IMF program that provides $12 billion of financing. More specifically, since November 2016 when the program was initiated, Egypt adopted a flexible exchange rate regime, which led to an immediate and large devaluation of the pound, passed a new investment law, removed foreign currency restrictions and controls, and cut fuel subsidies. While inflation spiked in the wake of the devaluation, it is slowly but steadily coming down.

Despite serious efforts of the government in restoring macroeconomic stability after many years of turmoil, the central and most critical problem Egypt faces, youth unemployment, has yet to be tackled. With nearly 40 percent of young Egyptians either without jobs or working at low wages in the informal economy, the main focus of the government has to be creating jobs. For Egypt, there are two complementary policy actions to achieve this overriding objective: government-led infrastructure development, and private sector-led investment and expansion of small and medium-sized enterprises (SMEs).

Since President Abdel Fattah al-Sisi came into power, the government has launched a number of megaprojects to develop the country’s infrastructure—the expansion of the Suez Canal, the building of a new administrative capital, and the construction of one million new housing units and 3000 km (around 1864 miles) of new roads. To date, however, only the Suez Canal expansion has been completed. The other major infrastructural projects are still in the design phase. These projects must be sped up since even after they are operational it will take time before they have an impact on the economy and thus employment. Private sector investment in Egypt has been hampered by excessive regulations, an interventionist bureaucracy, and particularly relevant for small businesses who create most of the jobs, the lack of adequate and affordable financing. It remains to be seen if the new investment law will reduce red tape sufficiently and provide enough incentives for local and foreign investors. The investment law is a good start but it needs to be accompanied by reforms that make it easier for small-scale businesses and start-ups to have access to formal financing.

It is clear that until and unless the problem of youth unemployment is addressed, the Egyptian economy will look very much like the pre-2011 revolution economy with all its attendant vulnerabilities. In other words, the ingredients for another revolution, and subsequent economic collapse, are still there. All future economic reforms have to one way or another be laser-like focused on youth unemployment. If not, unfortunately the past will likely be repeated.

Mohsin Khan is a nonresident senior fellow with the Atlantic Council’s Rafik Hariri Center for the Middle East focusing on the economic dimensions of transition in the Middle East and North Africa.

Security
Egypt has been battling militant extremists, mostly in North Sinai, with hundreds of police and security personnel killed. The battering ISIS has taken in Iraq and Syria may make matters worse, as its militant offshoots try to gain a new foothold.

Mirette Mabrouk is deputy director at the Atlantic Council’s Rafik Hariri Center for the Middle East.

Political Parties
Seven years after Egypt’s January 25, 2011 revolution against then President Hosni Muabrak, who ruled Egypt for thirty years, many Egyptians feel that they are back to square one, particularly in terms of political freedoms, and the hope that the country could develop into a political system based on diversity, pluralism, and accountability for those in power.

The revolution’s anniversary coincides with preparations with presidential elections that are due to be held on March 16. Mubarak ruled Egypt for nearly twenty-four years while totally rejecting to open up the political system to allow competitive presidential elections. Egyptians were only allowed to participate in a referendum in which he was always the sole candidate, answering either yes or no to extend his rule for six years. In 2005, Mubarak allowed a slight window, and two candidates ran against him. Mubarak won nearly 97 percent of the vote, and the opponent who came second with hardly 500,000 votes, Ayman Nour, ended up imprisoned for three years on mysterious charges as soon as elections concluded.

In 2018, President Abdel-Fatah Sisi and the state machine are clearly back to the days of lopsided referendum, and are making it nearly impossible for any candidate to run against the former army general and defense minister.

Any key candidate who dared to express that he was considering to compete against Sisi, has been tarnished in the tightly controlled state and private media. When Ahmed Shafik, 77, former prime minister and Muabrak loyalist, released a video from his exile in the United Arab Emirates declaring he wanted to run in the 2018 elections, the man was immediately deported from Abu Dhabi and forced to return to Cairo. A few days after his arrival, he released a statement that he was withdrawing his candidacy, while noting the wide popular support Sisi enjoyed in his effort to defend Egypt from the danger of terrorism and attempt to revive the economy.

Khaled Aly, 46, a lawyer known for defending the January 25 Revolution and workers’ rights, also announced in April that we wanted to represent the ambitions of the majority of young Egyptians to see real change in their country. A case was immediately moved against him, charging that he made an indecent gesture while celebrating a ruling he won four months earlier, annulling a maritime border agreement Sisi signed with Saudi Arabia to give up Egypt’s control over two strategic Red Sea islands of Tiran and Sanafir. He was sentenced to three months imprisonment, but continued to fight for his right to compete against Sisi in the presidential elections while awaiting an appeal in court.

A recent presidential hopeful and former parliament member, Mohamed Anwar Sadat, also announced that although he believed he was able to meet the necessary conditions to run against Sisi, he decided not to take part because he felt that the general atmosphere did not guarantee fair or free elections. Several months of campaigning by state institutions have already started to stress that Sisi is the only leader capable of running the country for another four years. No opponents are allowed access to the media. None are allowed to respond to charges that they are seeking or receiving foreign funding for personal interests in creating instability in Egypt or to question the wisdom of many of Sisi’s political and economic decisions.

In a press conference announcing he was withdrawing his presidential bid, Sadat noted that the climate was worse than 2005; whereby the regime did not want anyone to run against President Sisi. Sadat, Aly, and many others believe that the next move after Sisi wins a second, and supposedly final four-year term in office, is to amend the Constitution. Specifically, Sisi is expected to either extend presidential terms to six years, or perhaps remove any limits on the number of terms a president could spend in office, like former presidents Sadat and Mubarak did.

Khaled Dawoud is the deputy editor-in-chief of Egyptian newspaper al-Ahram Weekly and the head of the Dostour party.

Freedom of Expression
Answering the questions about the state of freedom of expression in post-revolution Egypt seems impossible. However, given all the developments that have happened over the past seven years, we will find those who are oppressed because of expressing their opinions are not only the well-known writers and intellectuals anymore. Over the past seven years, the crackdown on freedom of expression has extended to youth, social media users, university professors, innovators, and civil servants as Egyptian authorities have been trying to move the clock backwards. In doing so the they use laws, executive practices, and security prosecutions. The authorities have also banned numerous websites in an unprecedent maneuver.

Mohamed Abdel Salam is director of the research unit at the Association of Freedom of Thought and Expression in Egypt.