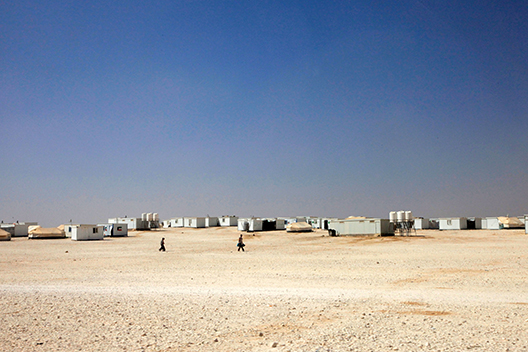 A view inside the Zaatari camp, northern Jordan. (UK Department for International Development)

There is little beyond some roads, power lines and a handful of sand-blown warehouses to suggest that this patch of barren land in Jordan is the center of one of the most important economic experiments in the world today. Most of the 8 square miles (21 sq km) of the King Hussein Bin Talal Development Area remain desert.

It is nonetheless the centerpiece of a major trade deal with the European Union and has been the subject of some of the sharpest policy minds in the world, pushing for a plan to get Syrian refugees out of camps and into legal work.

This week, a deal was finalized between the E.U. and Jordan granting sought-after trade concessions in exchange for work opportunities for refugees. Spanning 10 years, it will apply to 52 product groups that are manufactured in special economic zones (SEZs), on the condition that producers employ more Syrian refugees. The requirement for workforces is at least 15 percent Syrian participation now, rising to one quarter after three years.

The use of King Hussein Bin Talal (KHBTDA), and SEZs more broadly, follows on from an influential proposal made last Octoberby two Oxford University professors, Paul Collier and Alexander Betts. In it they pointed out that 60 percent of the world’s displaced were concentrated in just 10 haven countries, including Jordan. While granting citizenship to such large numbers was not currently feasible, the targeted use of SEZs might offer the right to work and transform them from a burden to an asset.

Collier and Betts argued that Jordan could provide displaced Syrians with jobs, education and autonomy while advancing the kingdom’s own industrial development. The KHBTDA also happens to be a short distance from the Zaatari refugee camp, which houses nearly 80,000 Syrian refugees.

The endeavor must negotiate a political minefield in Jordan. Some 650,000 Syrian refugees are registered in the kingdom but few are legally permitted to work. Many have taken jobs in the black economy at the risk of deportation and forgoing legal protections.

Although the logical solution to such vulnerability is to allow Syrians to work legally, things are not that simple. Jordan’s unemployment rate is at a record high of nearly 15 percent and folding refugees into the workforce could be politically explosive.

But SEZs do not function like the rest of a country’s economy. Under the Development Areas Law, companies in the KHBTDA pay a comparatively tiny amount of income tax, are bound by less red tape and the Jordanian government has already invested more than $100 million in infrastructure.

Michael Castle-Miller, whose organization Refugee Cities advocates for SEZs as special zones to employee refugees, said they can be beneficial to both Jordanians and Syrians. They can serve as places where forward-thinking trade rules, that he suggests would be too politically controversial to be applied nationally, can be tried out.

“We have to make the case that these zones are going to benefit Jordanian nationals as much as they benefit refugees,” he explained. When the SEZs are built in remote areas, such as KHBTDA near Mafraq, the benefits are especially marked. “A new zone like this has the potential to attract a lot of foreign investment into the area, a lot of infrastructure development, which means that there’s going to be a lot of job opportunities for Jordanians.”

The E.U. deal is a crucial development in the plan to motivate employers to take on refugees. Until now, plans to use SEZs to employ refugees have only been tentative.

In the organized assembly room at Petra air conditioning factory in the KHBTDA, all the employees are currently Jordanian. Speaking before the E.U. deal was finalized, senior staff were supportive of Syrian refugees working at the firm. It would be better, they said, than having employable people stuck in camps. But Jordanians interviewed were unclear about the potential for taking on Syrian workers and only knew that employing them without permits was illegal.

“I approached the UNHCR and asked them to have some refugees as employees; they were very helpful, but nothing happened,” said Ahmad Khamis, the manager of the site. “It’s not allowed for refugees to work here. I think it’s a problem with the government.”

Business leaders have welcomed the deal. Nayef al Bakheet, the general manager of Mafraq Development Corporation, which runs the KHBTDA, said the zone’s priority is employing Jordanians rather than Syrians. Privileging refugees over locals would not be “just,” he added. But he believes that the effect of the deal will be positive for all.

“This will give incentives to investors to come and invest in Jordan. It’s good news, the E.U. is a very big market and this is a good incentive to invest,” he said, adding that two zones in the Mafraq area would be covered by the agreement. “And, of course, it will create jobs for Syrian refugees, which is also a good thing.”

While the agreement opens the door for the employment of many refugees, there are still significant obstacles standing between Syrians and legal work in SEZs, as recent experiences have shown.

Pilot projects recruiting Syrians for SEZ garment factories had limited take-up from Syrians themselves. The work – which primarily appealed to women – was best suited to live-in workers, demanded long hours far from home and didn’t pay generously. Although the informal economy means risking deportation, it often also pays reasonably well, and there’s none of the costly paperwork associated with work visas: Without an economic imperative to work, legally refugees are unlikely to move in large numbers to SEZs looking for jobs.

Other stakeholders, too, are skeptical about the potential for SEZs to really make a tangible difference to Syrians’ working conditions. “What we want to see is meaningful work, just work with enforceable rights and conditions,” said Dominique Sherab from Arab Renaissance for Democracy and Development. SEZs, she pointed out, can compromise on minimum wage and workers’ rights and opportunities are often limited to garment work or menial jobs.

Those arguing for the SEZs are not unaware of these risks. And many are still optimistic that the zones, while not a magic bullet, have the potential to deliver legal work for Syrians in Jordan. “I have no doubt that if we have strong oversight and transparency these problems can be dealt with,” Castle-Miller said.

However, if they’re to attract and support refugee workers, the Special Economic Zones must do the same for investors. For those running King Hussein Bin Talal, the priority now is attracting businesses to the park and to Jordan. Something that has traditionally been easier said than done.

Before the deal was signed this week, Bakheet said he had taken part in numerous discussions with the World Bank, and the E.U. on promoting investment but had yet to see much material progress. Now that the ink on the E.U. deal has dried, he is positive about the potential for new investors to put money into zones like King Hussein Bin Talal.

Whether work opportunities for Jordanians and Syrians will be broadened in SEZs still relies on whether foreign direct investment will follow. One obstacle to this is the same one that saw refugees flee to Jordan in the first place: few businesses want to set up shop 18 miles (30km) from a brutal civil war.

“It’s the burden of private sectors and donors,” Bakheet explained. He is evidently proud of the zone and is enthusiastic about making it work, but is pushing for support from outside. “If the world is willing to help then it can, by bringing investment projects into Jordan and making opportunities for refugees and for Jordanians.”

Bethan Staton is a freelance journalist based in Amman, Jordan. She is a contributor to The Guardian, New Statesman, GlobalPost and Al Jazeera among others.

This article originally appeared on Refugees Deeply, and you can find the original here. For important news about the global migration crisis, you can sign up to the Refugees Deeply email list.