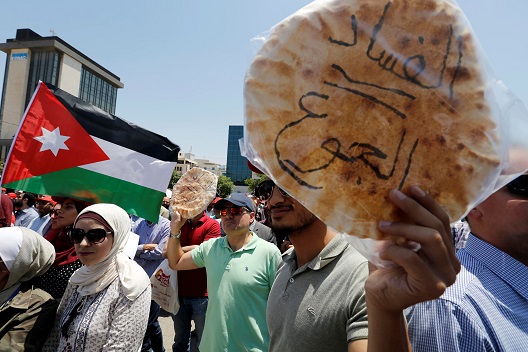 The protests that have spread to every corner of Jordan since May 30 are the largest since 2011. Tens of thousands have taken to the street in opposition to proposed changes to the tax code and increased prices for fuel and electricity, beginning with a call from professional associations to their members but quickly spreading to small and large urban centers across the kingdom.

These protests are not so much the latest wave of protests that emerged in Jordan since the outbreak of the Arab uprisings, but rather the newest incarnation of the nationwide protests against economic austerity measures that date back to 1988. These protests have emerged in response to numerous reforms mandated by Jordan’s agreements with the International Monetary Fund (IMF), particularly but not only in opposition to the lifting of government subsidies on such basic commodities as petrol, electricity, grain, and fodder.

The current protests differ from earlier waves of anti-austerity protest in three important ways. First, these protests include the active participation of the youth based hirak groups, which were formed in 2011 by a new generation of dissidents located in so-called loyalist or East Bank regions. The hirak are a diverse set of local groups formed by youth during the 2011 uprisings, creating new activist identities for a cohort more willing to opening and directly criticize the king (and his unpopular, Palestinian wife).

Second, these protests began in and around greater Amman before spreading to other cities and towns. Earlier anti-austerity protests, such as those in 1989 and1996, began in small southern small urban centers before spreading north to the capital.

Third, the protests started in response to a general strike called for by the professional associations and unions. These bodies have long been involved in calling for their members and constituents to turn out for protest events. But this is the first time they have coordinated to call for a general strike that resulted in a nationwide mass protest across class lines. Poorer Jordanians joined the protests in response to increased prices for fuel and electricity (subsequently withdrawn). A partial strike was repeated on June 6 in some sectors, with some talk of continuing strikes on a weekly basis.

Today’s protesters are diverse in terms of region, ethnicity, and class, with a professional middle-class maintaining the lead in the movement. Jordan is commonly seen as divided between two major constituencies: East Bank or nationalist, portrayed as constituents loyal to the monarch; and the majority Palestinian population. This binary characterization of the citizenry does bring into focus one large cleavage in the country, but it also obscures other tensions and dynamics of domestic politics, particularly concerning class.

Most significantly, the supposedly loyal and tribal areas—often portrayed as the regime’s primary base—do largely support the monarchy. But they do so because the monarchy has long advanced their economic interests and political influence while presenting a bulwark against the potential political influence on national politics of the majority Palestinian population. It is a bargain—support in exchange for economic favoritism—that is not set in stone, and indeed the regime has had to work to maintain it. King Abdullah II, in particular, is looked upon with far less favor from this tribal base than was his father. During the 2011 uprising, it was not unusual to hear talk of King Abdullah as “Jordan’s last king,” signaling support for his regime but not endless support for a Hashemite monarchy into the distant future.

Over the decades since the founding of the kingdom as a British mandate in 1921 (out of the post-World War I ruins of the Ottoman Empire), many of the areas now described routinely as tribal and loyalist struggled significantly and sometimes violently against the establishment of the monarch. In many cases, the tensions were more about advancing the interests of their town, region, or tribe over those of other regions, than they were about opposing the monarchy per se. Many of those battles are celebrated locally even today.

With waves of Palestinian refugees first in 1948 and then in 1967, followed by other waves of refugees—notably from Iraq and now Syria—the East Bank population has dwindled, putting increased pressure on the regime to respond to its interests and needs in order to maintain a substantial base of support.

These dynamics are crucial for understanding both Jordan’s protests during the Arab uprisings and the current protests, as well as earlier waves of protest. Most significantly, large-scale protests against austerity reforms date to the late 1980s. In 1988, Jordanians were outraged when an agreement with the IMF required Jordan to cut the value of the Jordanian dinar in half overnight. Six months later, in April 1989, the government lifted fuel subsidies. That latter move sparked nationwide protests that are credited with pushing King Hussein to restart Jordan’s democratization experiment begun and halted in the 1950s.

In August 1996, the regime tried lifting subsidies on grain and fodder, again sparking nationwide protests that lasted for weeks. These waves of protest emerged as a result of economic grievances first primarily in southern supposedly loyalist areas and only later spreading to the capital. These were not the only anti-austerity protests, but those of 1989 and 1996 were large enough to shake the regime, as are the protest taking place today. Jordan has indeed seen many large-scale protests over the years, particularly around grievances towards Israel during its numerous and brutal campaigns into Palestinian territories and against the US-led war in Iraq in 2003, to give just a few examples. But many of those protests, even as they bring tens of thousands to the street, have been largely limited to the greater Amman region.

With the Arab uprisings that began in late 2010 and exploded across the region in 2011, Jordan also saw an escalation of protests that spread across the nation. But unlike in neighboring countries, the Jordanian protesters never cohered around a single narrative of calling for the fall of the regime. The refrain at that time was largely of political reform, but with a significant cleavage among those protesting. That is, many Jordanians in the supposedly loyalist areas, including the young hirak groups and others most directly critical of the king, did not want less of the monarchy, but rather more. Their grievances were not about democracy or regime overreach, but rather objection to King Abdullah’s gradual retreat from providing services and jobs via the bloated civil service sector to those loyalist regions.

Other protesters at the time, particularly those led by the diverse political parties and among democratic reformers in and around Amman, were instead calling for a constitutional monarchy and a diminishment of the monarchy’s involvement in politics. So while the scale of the protests in 2011 and 2012 might appear to be similar to the protests today, the reality is that those protesters were divided in their demands.

The protests going on in Jordan this past week, however, do have a united agenda: the repeal of a recently introduced tax code that increased certain tax rates and also lowered the income threshold for paying taxes at all, and the restoration of subsidies for fuel and electricity. The now-resigned Prime Minister Hani al-Mulki complained, with good cause, that because the government had entered into an agreement with the IMF that committed Jordan to enacting such reforms, it had no choice but to comply. Resident of Amman, Salt, and Irbid all protested when he doubled the price of bread earlier this year, but their protets did not escalate as they did last week. Residents of Salt proved more resolved in their dissent, occupying a central area opposite the city’s grand mosque for more than a month in the leadup to the general strike last week.

In response to the last week’s outrage across the nation, the king suspended the new tax code and restored fuel subsidies, then quickly reverted to a familiar script: replacing the existing prime minister with a new one and calling for a national dialogue. Frankly, Jordanians are so tired of this playbook that many immediately recognized it as a stalling tactic of diversion rather than a serious response to citizen demands.

The challenge for Jordan is that it is in dire economic straits, struggling with security issues and a massive new flow of refugees who, like the Iraqi refugees of the early 2000s, are unlike to leave the kingdom anytime soon. The regime has committed to the IMF reforms in exchange for economic assistance, but those austerity reforms—lifting subsidies, increasing the tax base, and slashing the bloated public sector—will come at devastating costs to much of the population already struggling with rising prices, stagnant wages, and high levels of unemployment. Jordan’s national debt nearly matches its gross domestic product, and the kingdom relies tremendously on foreign aid. Yet a continued move toward IMF-style austerity reforms will only increase domestic dissent, with protests like those today likely to continue at every turn.

Jillian Schwedler is professor of political science at Hunter College and the Graduate Center, CUNY, and Nonresident Senior Fellow at the Rafiq Hariri Center for the Middle East at the Atlantic Council.