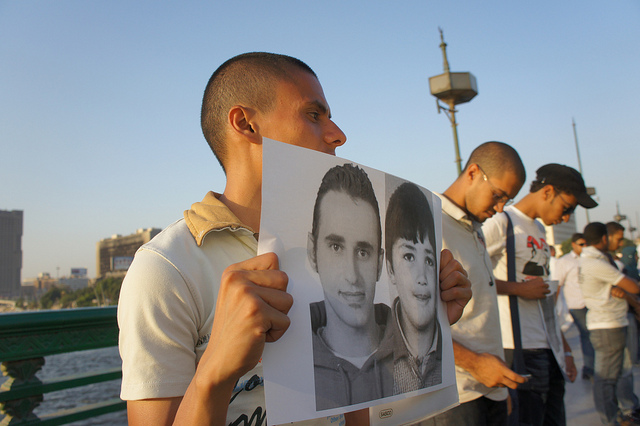 Three years ago today, Khaled Said was killed. After two policemen beat him to death, the authorities painted a picture of a drug addict and criminal, discrediting Khaled and his family. The image that stayed with Egyptians was not the one painted by the aggressors responsible for his death. Instead, what remained was the image of a young man, his face beaten beyond recognition, his skull fractured, and his jaw dislocated. This image appeared in stark contrast with a portrait of Khaled, showing a young man wearing a grey hoodie, the hint of a smile on his face.

The two officers responsible were sentenced to seven years in prison, only to be released a mere five days before the anniversary of Khaled’s death. Their names – Mahmoud Salah Mahmoud and Awad Ismail Soliman – are now known to the public but not imprinted in their consciousness like that of Khaled’s. If you asked an Egyptian to identify Mahmoud or Awad in a lineup, they likely would not be able to. Show the image of Khaled in his grey hoodie and you’d probably be hard-pressed to find an Egyptian who doesn’t know who he is.

Khaled’s image and name have become synonymous with the Egyptian uprising that began on January 25, 2011. His legacy as the symbol of the revolution is set in stone. It should come as no surprise then that his killers have not been held accountable. He is the symbol for a revolution that has not reached an end. Three years after his brutal death, torture continues and accountability is nowhere to be found. But he is not alone.

Three weeks before the January 25 uprising and six months after Khaled’s death, Sayed Bilal was arrested. Accused of playing a role in a church bombing in Alexandria on New Year’s Eve, the 31-year-old Salafist was tortured to death. He has since become known as the last man tortured by the Mubarak regime. Four of his killers were sentenced in absentia, their whereabouts unknown. The fifth, sentenced to 15 years in prison was later acquitted.

The uprising has done little to bring an end to police brutality. According to rights organization El-Nadim Centre, there were 47 cases of torture at the hands of police in the month of May alone. This is one of many reports that have been issued in the past two and a half years. Last October, El-Nadim reported 88 cases of torture and 34 deaths at the hands of police during President Mohamed Morsi’s first 100 days in power. A report leaked to the Guardian in April claimed that Egypt’s military had a hand in “forced disappearances, torture and killings across the country,” during the uprising. The reports and statistics continue to emerge, and little changes.

In November 2012, a few months after Morsi’s election, the Justice Ministry drafted new legislation imposing harsher penalties for torture. The now-dissolved People’s Assembly discussed the measures. However, the legislation never saw the light of day. Today with legislative authority handed over to the Shura Council, it has prioritized, instead, a draft protest law, that originated with the Ministry of Interior, that will stifle street movements and a draft NGO law that seriously undermines the few freedoms guaranteed in Egypt’s constitution.

With Khaled Said’s killers case ongoing, the retrial scheduled to begin on July 6, the final verdict is the ultimate test for accountability in Egypt. The past two years have witnessed repeated acquittals. Policemen accused of killing protesters have gone free. Military men accused of sexual assault have been exonerated. The slow but steady trickle of court cases ending with disappointing verdicts continues, as the subject of state security reform remains on the backburner.

Security was one of the five pillars of Morsi’s campaign promises. While he made no specific reference to putting an end to the Ministry of Interior’s brutal history of torture and interrogation, he did promise to develop “detention rooms and facilities in stations and courts to make them more humane” during the first 100 days of his presidency. Almost a year has gone by and the subject has not been broached. State security reform has been abandoned in favor of other issues, with judicial reform taking the utmost precedence.

The only real change the Ministry of Interior has implemented is a new benefits and rewards system for police officers. As Amnesty International released its latest report on torture in Egypt, the Minister of Interior honored 11,432 policemen nationwide.

If Khaled’s killers are not brought to justice, any hope for meaningful reform is lost. Save a short-lived embarrassment upon their return, after a security vacuum left Egypt’s streets vulnerable and its citizens patrolling and protecting their own, the police have been quick to return to their old ways. Each acquittal and not-guilty verdict serves only to strengthen the roots of an abusive security apparatus.

State security reform remains an unresolved issue, with a Ministry of Interior that refuses to be tamed. If the courts continue to acquit its members, absolving them of any responsibility in the deaths of protesters and activists, it never will be.