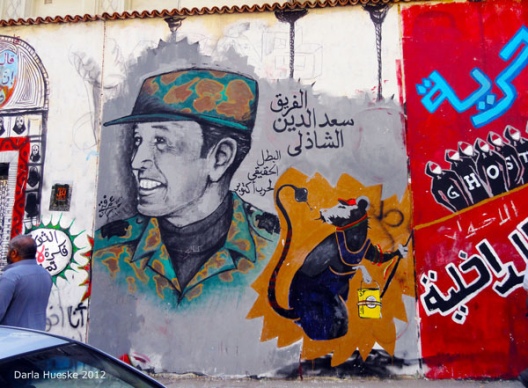 “If history will mention the 1973 (military) commanders on its brightest pages, there is no doubt that it will mention the leaders of the bloody coup who murdered their Egyptian brothers on the same page with Nero, Hulagu and Hitler.”
–Muslim Brotherhood statement issued prior to the October 6 Anniversary.

What Happened to Egypt’s Liberals After the Coup? | Sharif Abdel Kouddous, The Nation

Since the ousting of former President Mohamed Morsi and the August 14 massacre of the Muslim Brotherhood, many ‘liberals’ have been divided in the wake of military rule. Sharif Abdel Kouddous, tackling this difficult topic, comprehensively described the stance many ‘liberal political leaders have taken since August 14.

April 6 took part in protests against Morsi in early 2013 and wholeheartedly supported the June 30 demonstrations calling for early presidential elections. Yet after Morsi was toppled, the group quickly began to distance itself from the military and the interim government amid what it saw as greater army control over the state, a flawed constitutional roadmap and a re-empowered security apparatus.

“The political position of April 6 broadly reflects the views of a number of independent revolutionary activists, human rights attorneys, writers and organizers who have consistently spoken out against the authoritarian nature of the state and those running it since Mubarak was forced to step down.”

“This is not something new; everyone here has spent a very long time working together,” says Alaa Abdel Fattah, a renowned blogger and activist who was jailed under Mubarak and by the military and received an arrest warrant under Morsi. “We have been building this network for more than ten years. The idea is to make this network into a cohesive entity. We can’t promise we will succeed, but we know for sure that we will stay allied.”

“What appeared to be a revolution against a dictator turned out to be completely the opposite.”

Sherif Azer writes of how the June 30 uprisings ushered in another dictator, this time that of the military. He discusses the reality of human rights and how citizens themselves are a part of this new phase in Egypt’s history.

“This uprising wasn’t about bringing back rights and freedoms and getting rid of a vicious dictator. Rather, it was calling for a specific dictatorship: the military.”

“In an unprecedented moment, we are currently witnessing public support for human rights violations.”

“First, people don’t know what human rights are. They regard human rights as idealistic morals adopted by dreamers, or those deluded by humanistic tendencies.”

“At a time when human rights activists and organizations were supposed to have a neutral stand respected by all sides, the human rights community was attacked and categorized as enemies of the people.”

“The challenge now is to try to restore the neutrality and credibility the movement [human rights movement] has lost.”

The fifty-member constitutional committee held a hearing for representatives of the Children’s Defense Network to present their proposals on the constitutional amendments. In this clip, Motassam Mostafa Mahmoud, expressed two main points to the committee. First he spoke about the conditions of the schools and second the right of the Egyptian citizen. “The schools should teach us well, not have private tutorials [outside of the classroom], make us playgrounds, be concerned with cleanliness…so that this country…this country deserves to be the best country in the world.” When one of the speakers of the committee asked him what his dream was, Motassam responded saying, “That Egypt’s youth will come and build up a better future for Egypt than we are in now.”

Photo of the Week

Cartoon of the Week

Translation: “We need to know more about October 6…Our generation does not know anything except that 6/1 is about the Ahly and Zamalek match.”
Source: Shorouk

It’s half past midnight now and health ministry sources tell me the death toll is now at 51 ppl dead and over 280 injured. #Egypt

Today the MB r paying the price of cheering on the army & the police state. Meanwhile their opponents r simply reproducing the same mistakes

The carnage today will not produce any significant international censure, and certainly not significant domestic shift for MB

Both sides don’t believe in elections anymore, one because of an unconstitutional overthrow, the other because of undemocratic rule. #Egypt