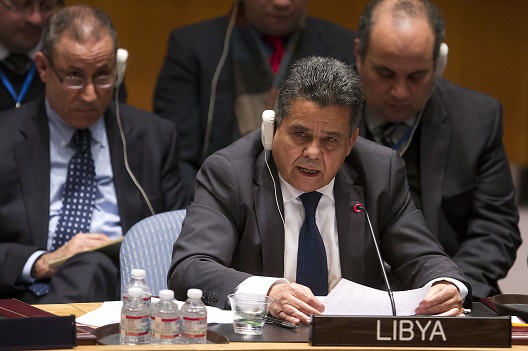 On February 17, Libya marked four years since the uprising that toppled Colonel Muammar Gaddafi, and ignited the country’s civil war. The war that began as a fight between two camps — Gaddafi and his supporters against other Libyans who were determined to topple him with the help of Nato forces — is now a war between an endless number of militias and gangs of all stripes. From the ideological and criminal to the regional and tribal, each faction is fighting for different reasons, and in pursuit of different goals.

On Wednesday, the United Nations Security Council met in an emergency session to discuss an Egyptian request for a new international mandate to deal with the growing threat that Libya poses to its neighbours, with the increasing presence of Daesh (the Islamic State of Iraq and the Levant) forces in the country. Splashed on TV screens around the world earlier this week was the barbaric slaughter of 21 Egyptian labourers in Libya. This was immediately followed by Egypt’s airstrikes against training camps and command centres that Cairo said belonged to Daesh in the eastern city of Derna.

Egypt, of course, is not alone in its growing unease about what is happening near its borders with Libya. Italy, France and Malta, just a stone’s throw away across the Mediterranean, have all expressed their concern about the direct threats emanating from Libya. The concerns are very real and run the gamut of issues, including arms smuggling, drug trafficking and illegal immigration into Europe, in addition to the threat of terrorist groups such as Daesh carrying out attacks in Europe.

Now, the problem is being debated in the UN by the western, Arab and African countries, many of which are themselves fragile states with precarious and unstable political economies. The question is what can or should be done to manage, if not to solve, the threats from Libya to their security and stability?

Unpacking that debate, and the policy options available, is of course a very complex process, especially where the UN is concerned. The need to come to an agreement given the multiple and always conflicting interests of the various governments that sit on the Security Council is never easy or straightforward. There are deals to be made, compromises to be reached, and a lot of give and take involved.

The basic underlining argument for this debate is the realisation that if Libyans cannot or will not figure out a way to reach a reasonable agreement among themselves and form a semblance of a stable and united government, as evidenced in the past four years, then Libya’s neighbours, at least, will need to take action to protect themselves. This action is something that no one can afford at this point to ignore in the face of the very real menacing fallout of the situation in this massive, rich and strategically located country, which is disintegrating and collapsing. It is right in the middle of North Africa and the Mediterranean region, and has long stretches of empty, ungoverned borders with the sub-Saharan Africa countries of Niger, Chad and Mali.

One aspect being debated in policy circles this week is whether the UN should enact a mandate, under Chapter 7, that would allow a coalition of countries — most likely Egypt and some African states with logistical support from Italy, France and several Arab countries — to carry out air strikes and even send in ground troops to Libya to fight Daesh forces as a part of the larger US-led campaign in Iraq and Syria. Other countries, mainly the United States and Britain, are not very comfortable with such a line of thinking, and therefore offer a counter argument that such a move will simply make things worse, drawing in more radical elements into the fight, as has been witnessed in other places in the past, including Iraq and Afghanistan.

Another proposal being debated holds that the international community should simply arm and support the existing, internationally recognised government, weak and ineffective as it is, and help it to build a small army that could start fighting these extremists with the support of neighboring countries. Opponents of this proposal say that the situation in Libya is still not there yet, and it’s not urgent enough to take such a decision considering the potential of arms falling into the hands of militias. They take the following line: ‘Let’s wait and see what happens to the UN sponsored talks in Geneva and the city of Ghadames, among various Libyan political factions, to form a unity government.’

The final proposal being discussed is one that pushes for imposing sanctions on Libya’s financial assets and an embargo on its oil and gas exports to minimise potential funding for extremists groups and reduce the “ATM effect” that Libya can have when it comes to funding groups from Boko Haram in Nigeria to Daesh in Iraq and Syria, among many others across the region.

One thing is clear: Libya is now, and will continue to be in the short term, a growing threat so long as it is a no-man’s land, ruled by and divided up among armed gangs of all kinds. The question is whether the international community, whatever its make-up, will decide to approach the Libya quagmire in a united, coherent and comprehensive way and in a holistic military, economic and diplomatic manner — or whether it will just decide to bomb some targets from the air and simply end up breaking big rocks into smaller ones and enrich the already fertile ground for a new terrorist crop.

Libya is now beyond any easy solutions, which were possible two or three years ago, and whatever policy will prevail in the coming weeks will be costly for Libyans themselves and the neighboring countries. As the past 30 years of delayed international engagement, of one sort or another, in Somalia, Afghanistan, Iraq, Syria, Libya, and before them, Lebanon, shows us clearly, it is not so much about what the international community does, but rather about how and when it does it. Unfortunately, all these precedents reveal that it is usually done very late, badly and almost always ends up producing far worse results than originally anticipated.

Ultimately, the final outcome in Libya will be messy, mixed, and dependent on whether Libya itself can produce a new political leadership capable of charting a new course; looking to the future not the past; and exhibiting the international and domestic credibility needed to tap into and connect with the international community and the wider silent majority of Libyans. The people are against all groups vying for power today, tired of war and vengeance, and are waiting for someone who can lead them into a future that is beyond Gaddafi’s tyranny and the post-Gaddafi chaos and failures.

Hafed Al Ghwell is a Senior Nonresident Fellow with the Rafik Hariri Center at the Atlantic Council in Washington DC.

Image: Libyan Foreign Minister Mohamed Dayri speaks during a United Nations Security Council meeting about the situation in Libya in the Manhattan borough of New York February 18, 2015. Libya and Egypt asked the United Nations Security Council on Wednesday to lift an arms embargo on Libya and help it build the army so it can tackle Islamic State and other extremist groups. REUTERS/Carlo Allegri