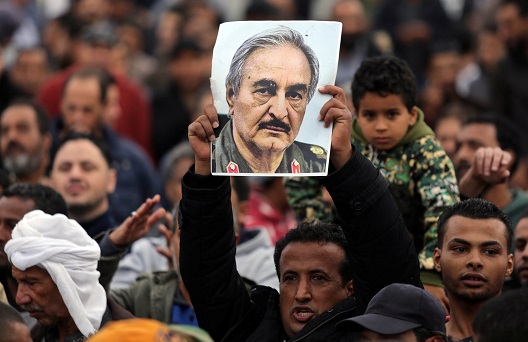 The situation on the ground in Libya is fluid and complex. Militias in the West and South police their own local communities but few have regional control. The only exception is in eastern Libya under the leadership of strongman General Khalifa Haftar and his self-declared Libyan National Army (LNA). In his campaign to eradicate terrorism, Haftar emerged as a potential strongman who could bring security to Libya. That possibility, however, is becoming less likely.

On August 15, 2017, the International Criminal Court (ICC) issued an arrest warrant for Mahmoud Mustafa Busyf al Werfalli, the leader of al-Sai’qa Brigade — an LNA affiliate — on charges of committing and ordering at least thirty- three extrajudicial executions. In the months after the ICC arrest warrant, the LNA never detained Werfalli for only a few days, leaving him to kill at least fifteen additional people. In the most recent incident, a video captured Werfalli executing ten prisoners in front of a crowd of supporters. The show was a response to a terrorist attack the day before that killed thirty- five people, however Werfalli’s victims had no proven involvement in the attack at the time. In response to the video, the United Nations Support Mission in Libya (UNSMIL) reiterated the demand for the immediate handover of Werfalli to the ICC. On February 6th, Werfalli turned himself in to the military police in Benghazi, who quickly moved him to a nearby town. Rumors that he might be extradited to the ICC set off riots in the city from his supporters, who blockaded roads and set fire to the streets. After a night of demonstrations, General Haftar caved to protesters’ demands and released Werfalli, revealing the importance of Werfalli’s power to Haftar’s rule.

Werfalli’s relevance as a leader of the most powerful Salafi brigade under the LNA makes him an indispensable asset to Haftar. Salafis have been key to Haftar’s consolidation of power due to their strict obedience to authority. In addition, Werfalli’s brutality against Islamist fighters helped rally popular support for Haftar’s campaign against armed Islamists. However, Werfalli has also been a liability to Haftar since the ICC’s arrest warrant. Protecting Werfalli demonstrates that Haftar cannot abide by international norms and the rule of law, therefore hindering his legitimacy as a just ruler. For months, Haftar had to choose between protecting Werfalli to satisfy his supporters or caving to international demands by sending him to The Hague. Haftar’s efforts to achieve international legitimacy conflict with his control over the East, particularly in regard to his stronghold and de facto capital of Benghazi.

The unrest seen in Benghazi, and Haftar’s immediate appeasement to the demands of protesters shows that the grip Haftar claims to have on the city has begun to slip. Many of the demonstrators were also members of the LNA who served under Werfalli. The protesting by some members of al-Sai’qa Brigade against Haftar also hints at a power struggle between militias and reveals the weakness of the LNA’s internal ties. The inability of Haftar to turn Werfalli over to the ICC additionally shows he does not wield power over the commanders of his own army, let alone over the city of Benghazi.

The recent arrest of Werfalli, an alleged war criminal, was an attempt to appease the international community. Releasing Werfalli so swiftly proved the move was futile. To Haftar, Werfalli proves to be more of an asset to his rule over the East than a hindrance to his legitimacy to Western leaders. This is not the first time Werfalli was detained — in August 2017 he was arrested by Haftar’s eastern forces, only to be released again. Allowing Werfalli to remain free proves that Haftar will do whatever it takes to keep himself in power, rather than succumb to the demands of the international community. It is highly unlikely that Haftar will try to arrest Werfalli again, considering the public outcry that his arrest galvanized.

Rather, Haftar may use Werfalli as a publicity tool in his favor in the run up to elections. By not handing over Werfalli to the ICC and listening to the population’s demand, Haftar demonstrates he is not a puppet of Western leaders and instead responded to public demands and protected the commander. There is also a possibility that Haftar will spin the narrative the other way, claiming that his attempt to hold Werfalli accountable was an effort to distance himself from a war criminal, in order to garner support from those who oppose Werfalli.

The emerging instability in LNA-controlled territory in the past few weeks could affect upcoming elections. First, the worsening security conditions in Benghazi — previously regarded as one of the most secure cities in Libya — are unfavorable to elections. Instability affects the participation and legality of election turnout. If no one can guarantee the safety of voters and election integrity, turnout may be stunted.

Second, the events in Benghazi demonstrate Haftar’s diminishing strength and authority. In anticipation of this, alliances— both political and military, domestic and international — could transform. The al-Sai’qa Brigade’s allegiance to Werfalli, their immediate commander, demonstrates the LNA’s crumbling top-down authority. The presence of civilians not belonging to al-Sai’qa at the protests is also telling of the deepening polarization within the LNA. Individual militias could revert back to policing their affiliated communities and neighborhoods, further unraveling the LNA coalition. On the political front, as the appeal to align with Haftar thins, loyalists inside both the western-based Government of National Accord (GNA) and the eastern-based House of Representatives (HoR) may put their weight behind other military or political actors. International actors who back Haftar may also consider shrinking expensive investments that support a weakening military campaign. With less outside support, Haftar would be unable to “liberate” Libya and thus lose domestic support and legitimacy. Additionally, international backers will find it difficult to justify supporting a leader who increasingly disregards the rule of law.

Recent terror attacks in Benghazi debunk the misnomer that Haftar is the sole custodian of power in Benghazi, let alone eastern Libya. While Werfalli’s detention and quick release may be perceived as a minor detail, it helps paint a larger picture that any actor, even Haftar, does not wield absolute control over territory. The situation in Libya remains malleable and in a delicate state of fragmentation, which does not bode well for the United Nations’ plan for elections.

Image: Photo: A man holds a poster of Eastern Libyan military commander Khalifa Haftar during a rally demanding Haftar to take over, after a U.N. deal for a political solution missed what his supporters said was a self-imposed deadline on Sunday, in Benghazi, Libya, December 17, 2017. REUTERS/Esam Omran Al-Fetori