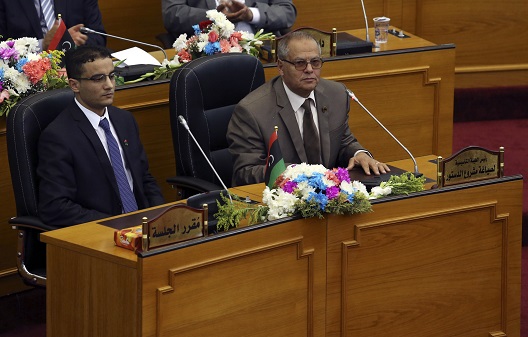 The transition to democracy in Libya always has been a tenuous affair, but with the start of constitution drafting, the process as imagined is falling apart. The lack of national political leadership, security infrastructure, and public credibility in the state form a vicious circle. Nonetheless, opportunities to move the transition forward exists if the political will to build and maintain political institutions can endure.

The key processes and institutions envisioned at the end of the revolution have not generated the traction required to move the political transition forward. The credibility of the General National Congress (GNC), Libya’s interim parliament, has reached the lowest point since its election. According to original text of the interim constitution, the GNC’s mandate expired in February, prompting accusations that it was working illegally. GNC members seem to have resigned themselves to being lame ducks in advance of their expected resignation in July. Attendance at plenary sessions rarely has exceeded eighty members out of 200, well below the 120 votes needed to make major decisions. Members have also been scared away by threats on their lives, and by the storming and burning of the GNC meeting hall by a militia in February.

The attendance problem will complicate the election of a new prime minister. Abdallah al-Thinni, the former defense minister, refused to form a government after a militia entered his home on April 13 and threatened the lives of his family. He resigned shortly thereafter. Al-Thinni took office as caretaker prime minister for only a few short weeks before his resignation, having replaced Ali Zeidan, whom the GNC sacked on March 11. Apparently, armed groups opposed al-Thinni’s choices for the ministries of defense, interior, and finance.

If the GNC can reach a quorum, the leading candidates to replace al-Thinni likely will be Ahmed Maiteeg, a businessman from Misrata, or Omar al-Hassi, a professor from Benghazi. Another possible contender is Mohamed Buker, former director of the civil state department. Maiteeg is supported by those Libyans who think that a prime minister from the center of the country could help to overcome the crippling east-west divide. But al-Hassi has broad support in the east, especially among his powerful al-Hassa tribe.

Meanwhile, the Constitutional Drafting Committee (CDC) has not yet met the hopeful expectations that it would reinvigorate the political transition. The committee began its work on April20, but already suffers from low credibility after poor elections in February. Voter turnout did not exceed 15 percent, the Amazigh and Tebu ethnic minorities boycotted in protest of having received only two seats each, and polling stations remained closed in three constituencies due to threats of violence. In the end, only forty-seven of the sixty members were elected. The CDC elected its leadership—including a president, deputy president, and rapporteur—on April 20, which reduces the incentive for the Amazigh to lift their boycott if their members cannot join the leadership. Some Libyans have questioned the legality of the CDC to begin its work without a full complement of members.

It is not all bad. The elected members of the committee appear to be moderate and well educated. At least twenty-two are lawyers (although some Libyans feel that to be problematic, given the poor training of lawyers under the Qaddafi regime and their legalistic approach to governance). No Islamist group endorsed candidates in the election resulting in few if any Islamists represented. Except for only one member from Benghazi who is a self-described federalist and supports autonomy of the eastern region, the vast majority of committee members maintain a consistent political ideology with regard to the unity and integrity of the Libyan state. On the whole, most Libyans see the members as competent.

The committee is supposed to hold its sessions in al-Bayda – a town two hours east of Benghazi and one hour west of the hotbed of Islamist extremism, Derna. Al-Bayda is a quiet town and the meeting site of the committee that wrote the 1951 constitution, but given its proximity to these towns, remains strategically vulnerable. Indeed, the first meeting, originally scheduled for April 14, was postponed due to the closure of the al-Bayda airport. It was ultimately held one week later, on April 21, and was largely ceremonial. As per the GNC’s decision, a second session will not be held until the remaining seats are filled through regular elections—potentially incentivizing the Amazigh to lift their boycott of the process.

The High National Elections Commission (HNEC) must run elections for the remaining members of the CDC, as well as for a 200-member Council of Representatives to replace the GNC. The commission plans to hold CDC elections in a matter of months, while parliamentary elections could happen in the fall. The HNEC is in disarray, however, after the head of the commission resigned. The new head, the former deputy chairman Emad al-Saih, will have a difficult time of running elections so quickly.

The formal institutions called for by the interim constitution are off course or suffering from challenges to their credibility. The government is without a leader, a weak GNC is about to resign, and the CDC appears frozen at the moment. Elections to replace these institutions are in the hands of untested leadership in the HNEC.

The most promising ongoing process is the National Dialogue, which falls outside the context of the interim constitution. The National Dialogue intends to bring influential people from all over the country together to agree on common principles for the Libyan nation. The National Dialogue Preparatory Commission has been travelling the country to garner support for the idea, with backing from the United Nations. Meetings have gone well generally and have been cordial, though they have not yielded specific gains. Rival groups—such as Islamist militias in the east and Zintani militias in the west—have agreed at least to come to the table. The Preparatory Commission will oversee the selection of some 300 delegates, with a first meeting planned for May. Delegates will determine for themselves what the outcome of the Dialogue should be, and how it should interact with the CDC and forthcoming Council of Representatives.

The head of the Commission, Fadeel Lameen, said that the National Dialogue should work toward a kind of charter that will act like the US Declaration of Independence: it will not carry the force of law, but it will espouse important principles that are part of the national character. So far, the talks have not produced conclusive results, but the impact of the National Dialogue on the political process can only be determined after it begins its work. Its mix of broad participation and flexible mandate might give much-needed shape to the transition not yet provided by elected institutions.

As a nascent state characterized by a lack of institutions, Libya struggles to build its democratic institutions from scratch. There is a false confidence in fresh starts: that a new election, a new appointee, or a new committee will generate solutions to intractable problems. Yet institution building is an iterative process and momentum is important. Libya’s momentum needs good leadership and strong popular support; otherwise it will head in the wrong direction. So long as determination and respect for the public will survives, there is a chance that Libya can find its way.

Duncan Pickard is a nonresident fellow at the Atlantic Council’s Rafik Hariri Center for the Middle East. Karim Mezran is a senior fellow at the Center.