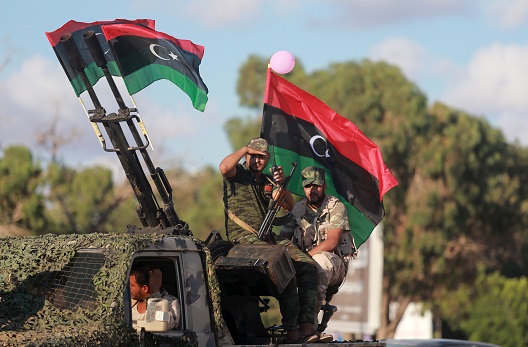 Speaking at the UN General Assembly in New York on Monday September 28, US President Barack Obama acknowledged the shortcomings of the 2011 NATO military intervention in Libya while simultaneously defending the initial logic of the mission, stating that a vacuum had been left behind after the toppling of the Qaddafi regime. Since then, he pointed out, two sets of competing political institutions—each upheld by a loose alliance comprising myriad politicians, militias, and factions from across the country—filled this vacuum. Obama did not comment, however, on the real reason for this post-Qaddafi vacuum: Libyan political decisions since 2012 to appease militia actors and kick difficult decisions down the road. The inability of top-level figures from the multiple Libyan factions to bury the hatchet and sign the UN-negotiated agreement for a national unity government demonstrates this ongoing leadership failure.

Both Libya and the surrounding region have experienced the byproducts of the leadership vacuum in Libya. Months of widespread fighting have heavily damaged Libya’s infrastructure and increased the number of internally displaced people (estimated at about 400,000 by UN High Commissioner for Refugees). Human, drug, and arms smuggling has proliferated, especially in the western part of the country, putting increasing pressure on Europe’s southern border. Extremist groups have also taken advantage of widespread lawlessness to gain a foothold in the country and use its territory as a launch pad for operations in the broader region.

For international stakeholders, an opportunity to fix the issues left unaddressed in 2011 and exacerbated by the summer 2014 Tobruk-Tripoli split comes through the ongoing UN-backed dialogue, which aims to establish a government of national accord and a new set of political institutions in Libya to restart state-building efforts.

Yet, this opportunity is slipping away. Failure to reach consensus on a political agreement by September 20 has already made a successful and internationally binding settlement far less likely. The October 2 discussion at the UN General Assembly should have resulted in a signed and finished accord, giving the deal great momentum and buy-in from many stakeholders. Sadly, no movement on a final settlement took place during the General Assembly. Various artificial deadlines have passed, but a genuine hard deadline approaches: October 20 when the Tobruk-based House of Representatives (HOR) legal claim to electoral legitimacy would have expired.

Rather than using this hard deadline as motivation to reach consensus, however, the HOR has sought a loop hole to evade the dilemma by preemptively extending its own mandate on Monday, violating the August 2011 Temporary Constitutional Declaration and its manifold amendments. While at first glance the extension appears to buttress the body’s tenuous legitimacy, it actually undermines any motivation for a rapprochement. By changing the rules, the HOR has given its rival, the Tripoli-based General National Congress (GNC), reason to doubt its trustworthiness as a negotiating partner. This move is, in many ways, analogous to the GNC-backed November 6, 2014 Supreme Court decision which sought to manipulate Libya’s legal framework against the HOR. Even though the HOR will likely remain the recognized government, even if no deal is signed by October 20, the stark reality that Libya lacks legal sovereignty is now manifest for all to see.

With the power of both the HOR and the GNC clearly stagnating, the cohesiveness of both national level blocs has already started to fade as groups and militias progressively splinter away towards newer alliance structures. One such instance occurred last week when groups of fighters from Tobruk and Baida, two cities firmly affiliated with the Tobruk establishment, abandoned their commitments to Operation Dignity and joined the Derna Mujahiddeen Shura Council (DMSC) in its fight against Islamic State (ISIS or ISIL) elements. The DMSC has long opposed the HOR, particularly its Commander of the Libyan Armed Forces General Khalifa Haftar rumored to be contemplating a government takeover should a political agreement fail to materialize.

For now, only various militia fighters associated with the Gotaan tribe from Tobruk and the Ali Hassan al-Jabar Brigade based in Baida have joined the fight against ISIS outside Derna—a development indicative of the fluidity of alliances and of how the collapse of current arrangements in the Tobruk bloc could lead to a new grouping of anti-ISIS, anti-Haftar brigades. Especially in eastern and central Libya, the growing threat emanating from ISIS cells could lead to a variety of new coalitions and the federalists’ reemergence as a separate force.

Given the above picture, clearly, the signing of a national deal and the establishment of a government of national accord would not be sufficient to solve all the intertwined issues hampering Libya’s post-revolutionary stabilization. Nonetheless, a national level deal pacifying the main forces inside the country, solidifying the crumbling blocs, and creating a new set of legitimate institutions still represents a much-needed first step. All international stakeholders should support a deal with their full strength by offering to punish those who block it. This fact must not be lost as mandates are extended and deadlines are missed.

Of paramount import for the international community, a deal would allow more resources to be devoted to crafting an anti-ISIS coalition. At present, ISIS cells have now ensconced themselves in Sirte, forged alliances with neighboring tribes, and have started launching attacks on key oil-related infrastructure in the so-called ‘Oil Crescent’ region. Moreover, these elements thrive on the security and leadership vacuum that Libya currently affords.

This is a matter of tremendous geostrategic moment and tackling it must be key to subsequent international engagement with Libya. What is presently absent from the discussion of incentivizing a national unity deal, is the critical fact that such a deal is a sine qua non for producing a single set of legitimate institutions with which international actors can coherently engage. Lacking such institutions and clearly defined interlocutors, Western attempts to bolster anti-ISIS efforts are bound to encounter myriad inefficiencies. Therefore, the time has come to lay out a stern warning for those who overtly block progress towards a national unity government—sanctions, ostracization from future political life, travel bans, and asset freezes.

Jason Pack is President of Libya-Analysis.com and a North Africa Analyst at Risk Intelligence.