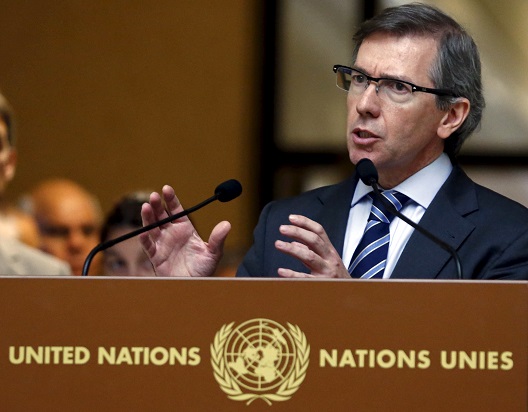 Libya Envoy and Head of United Nations Support Mission in Libya (UNSMIL) Bernardino Leon gestures during a news conference after a meeting at the Palais des Nations in Geneva, Switzerland, September 4, 2015. (Reuters)

Libya’s UN Special Envoy Bernardino Leon announced on September 21 that the text of the UN agreement for a unity government based on Libya’s political dialogue is final and closed to revisions. It is now up to the parties to accept or reject the proposal. Despite Leon’s announcement, there remains a significant hurdle prior to the parties’ acceptance or rejection of the deal—the discussion of names for the Government of National Accord (GNA). In the coming days, the primary parties of the political dialogue, the House of Representatives (HOR) and the General National Congress (GNC), are expected to convene and will be asked to present candidates’ names and select the nominees for the Prime Minister, two deputy Prime Ministers, and two more members of the Presidential Council of the GNA. Upon completion of this list, the parties will have the opportunity to vote upon and endorse the agreement and subsequently install a GNA before the expiration of the HOR’s mandate on October 20.

The text of the agreement itself has not yet gone public. Although Leon has stated that there are only minor changes from the Skhirat agreement—initialed in July by all negotiating parties excepting the GNC—the precise nature or extent of alterations to the text remains unclear. The GNC’s main objections to the Skhirat agreement include the lack of specificity regarding the State Council, the body that will absorb GNC members and serve in a “consultative” role to the state, and the future of General Khalifa Haftar, the controversial head of the HOR-affiliated Libyan National Army (LNA).

UNSMIL, the European Union, the United States, France, and others have all issued public statements of support for the accord and have encouraged the parties to reach an agreement. If all the Libyan factions choose to move forward together to form the unity government, that would undoubtedly be the best possible outcome. Yet even with broad agreement, the success or failure of a new transitional process would rest in part on the role of the international community to provide the GNA with massive backing and support in order to begin reversing the negative trend of violence and chaos that has taken root in post-revolutionary Libya. The proliferation of competing militias and increasing fragmentation of political and security actors means that, even under a unity government, Libya will need foreign support to help provide security for the GNA and Libya’s vital institutions. Several European countries have suggested an international peacekeeping force, an idea acknowledged even by Leon. In addition to providing security for the new government, international support must provide training for and assist in reconstructing a unified Libyan security force. Although Libya would certainly face difficult years of post-conflict reconstruction, it remains the best foreseeable conclusion to UN-led negotiations.

There is no guarantee, however, that all parties will unanimously accept the final draft agreement. If rejected by either party, the deal falls through and the international community will have no best-case scenario. Without a deal, a political vacuum would reemerge, which the various militias, jihadist groups, and criminal gangs would likely fill.

In western Libya, the militias of the Libya Dawn coalition—an alliance of forces created to counter the eastern army of General Khalifa Haftar—has increasingly fractured under the pressure of its more radical commanders. These spoilers have largely undermined important truces signed at the local level by various militias, primary among which is the agreement between the Misrata militias and those of Zintan.

In the east, rumors of a possible military takeover by General Haftar in case of a failure of the parties to reach an agreement have gained traction. In recent days, Haftar’s forces have twice blocked Prime Minister Abdullah al-Thinni from flying from Labraq airport near Bayda, even going so far as to remove him from the plane in a show of power. “Operation Doom” by the LNA in Benghazi, which Haftar has dubbed the definitive campaign against Islamic State (ISIS or ISIL) positions in the city, could signal an attempt to undermine the pro-negotiation factions of the HOR. GNC Prime Minister Khalifa Gweil immediately retaliated by calling for a freeze of the political dialogue until Haftar ends the offensive.

If Haftar installs himself as the military ruler of Libya, even if only granting him direct control over parts of Libya’s eastern region, it could precipitate a devastating regional crisis. Egypt would likely recognize the Haftar regime—a continuation of its current policy to secure its western border and counter Islamist elements. In this eventuality, Algeria and Tunisia would strongly object to Egyptian intervention in Libya, as they have stated many times before. Russia could also decide to back Haftar as part of its own anti-ISIS or anti-Islamist policies and to extend its influence in the region. As it has done in Syria, Russia has demonstrated its willingness to insert military power into the equation. This would place the West—the United States in particular—in a difficult position, forcing US and European powers to either provide tacit support for a Haftar regime or oppose Russian policy directly. Neither option offers a viable diplomatic position given regional tensions. Supporting Haftar would foster open civil war between the eastern and the western forces in Libya. Directly confronting Russia opens the door to possibilities too frightening to consider.

US interests—and Libyan for that matter—would be best served by preventing a Haftar power grab. Unfortunately, options to do so are limited. No doubt, Leon is trying his best to unite the delegates to the greatest degree possible. If the agreement stumbles over its rejection by some parties, Leon’s best option may be to convene the signatories of the Skhirat agreement—including the HOR, members of the GNC, and diverse local parties—and move forward to form a government even without the full, unified support of all parties. This option would not be without its risks and would require external powers to help Libya reach peace and rule of law through a range of enforcement tools, including heavy sanctions on spoilers and detractors of the new government, special operations missions to target the most dangerous elements, and possibly even a full-fledged military intervention. All of this to enforce what would really be only a partial Libyan agreement—far from an appealing solution.

None of the scenarios following from anything less than 100 percent support of the Libyan parties for the political agreement would yield a positive outcome. Analysts and politicians within Libya and without have said Libya “is at a critical point” many times over the past four years, and truthfully so. The end of negotiations, however, along with the escalation of Haftar’s ambitions, present perhaps one of the most decisive moments for Libya. The delegates must come together and sign the agreement or risk any number of potentially devastating alternatives. Plan A may barely seem possible, but Plan B and Plan C would endanger Libyans, Libya’s regional neighbors, and Libya’s western supporters.

Karim Mezran is a Senior Fellow at the Atlantic Council’s Rafik Hariri Center for the Middle East focusing on the politics and economics of North Africa.