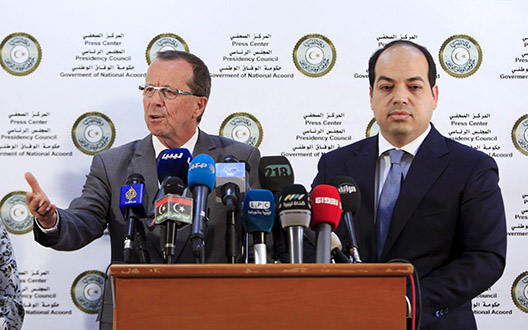 A member of the Presidential Council of Government of National Accord, Ahmed Maiteeq (R) and U.N. Special Representative and Head of the United Nations Support Mission in Libya, Martin Kobler (L) hold a joint news conference in Tripoli, Libya, April 17, 2016. (Reuters/Ismail Zitouny)

Libya’s UN-brokered Presidency Council and Government of National Accord (GNA), which arrived in Tripoli at the end of March amid tensions, faces many challenges. Chief among them is that it does not take advantage of a political culture that has long been a main source of state legitimacy in Libya. The basic elements of contemporary Libyan society are the extended family, village, clan, and tribe, and any agreement not grounded in them threatens to further divide Libya and worsen the factional violence.

Billed as a peace accord, the plan brokered by Bernardino León, head of the United Nations Support Mission in Libya (UNSMIL) from August 2014 to November 2015, is nothing more than a power sharing agreement among the groups, factions, and individuals that have mismanaged the country for the last four years.

From the seventh to the eleventh centuries, successive waves of Arabs arrived in Libya to impose political domination, together with the Islamic religion and Arabic language. As a result, Libya developed into a tribal society of multiple backgrounds and races with the tribal factor an unyielding constant in Libyan politics.

Today, the extended family remains the core unit of social, economic, and political life in Libya with the individual’s commitment to family overriding all other social obligations. The extended family also is central to economic life with opportunities for employment in business, education, or government most often dependent on family, clan, and tribal connections.

Under the monarchy, politics in Libya became mostly a contest of family, tribal, and parochial interests with lineage, kinship, clan, and tribe comprising a central component of political leadership. Initially, the Qaddafi regime tried to destroy tribal loyalties and organization, but when this proved impossible, it accepted the power of the tribes and integrated them into its ruling network. The regime’s creation of People’s Social Leadership Committees, structures that incorporated the traditional political elite, especially tribal leadership, into the national decision-making process, marked the first time in Libyan history that its 140 tribes were organized into even a quasi-national structure. As the regime turned increasingly to the tribes for political support, tribal identities strengthened and tribal affiliation became even more important.

A survey of Libyan university students conducted by Amal Obeidi, a professor of political science at the University of Garyounis in Benghazi, and published as the Political Culture of Libya at the beginning of the last decade confirmed the important role families, clans, and tribes continue to play in contemporary Libya. Echoing the findings of earlier studies, it found that Libya remained a tribal society with the tribe a major source of personal identification. The survey also found that Arabism and Islamism were other sources of personal identity, but that the tribe was one of the main sources of legitimacy for the government.

During the 2011 revolution, some tribes joined the rebels and others supported the regime or remained neutral. In mid-April 2011, tribal leaders met in Benghazi and issued a call for a free, democratic, and united Libya, rejecting the regime’s argument that Qaddafi was the only one keeping the tribes from engaging in internecine violence. In response, the regime convened its own meeting of tribal leaders in Tripoli. The convening of competing tribal gatherings in Benghazi and Tripoli was a testament to their power and influence. It showed that both sides in the revolution recognized the importance of convincing tribal leaders of the wisdom and righteousness of their cause.

In post-Qaddafi Libya, tribal identities remain strong, and tribal alliances and economic interests have been a driving force in the ongoing civil war. Successive interim governments have continued the traditional practice of tribal patronage, using state largess to buy tribal loyalty and support. Tribal leaders often have acted as negotiators and conciliators in their areas of influence, resolving conflicts and mediating between the interim government and armed groups.

In the many months it took the United Nations to cobble together the current political agreement, there was no recognition of the role tribalism has long played as a source of legitimacy and no serious outreach to the influential families, clans, and tribes of Libya. Instead, UN envoy León focused his efforts on the political parties and leaders whose performance has been repeatedly and increasingly criticized in public opinion polls. The result is an overly complex, top down agreement that is more likely to divide the Libyan people than to unite them and more likely to compromise the democratic process than to bolster it. The difficulty Martin Kobler, who replaced León in November 2015, has had in getting both the internationally recognized House of Representatives in Tobruk and the General National Congress (GNC) in Tripoli to accept the agreement is evidence of its shortcomings.

At the beginning of March, Kobler told the UN Security Council that the overwhelming majority of the Libyan people were in favor of the current political agreement. While, based on public opinion polls, the Libyan people support some form of national unity government, no evidence in these or elsewhere has surfaced to substantiate his claim that they support the current one. On the contrary, the ongoing struggle to generate support for it suggests Kobler’s claim is both inaccurate and self-serving. It look León innumerable meetings, and multiple drafts to put together an agreement which in the end pleased no one. Throughout this marathon process, the UN largely failed to involve the Libyan people and civil society organizations through public opinion surveys or focus groups. Instead, León worked almost exclusively with the very institutions, political parties, and individuals that the Libyan public increasingly rejected in a series of public opinion polls from 2013 to 2015. And revelations of Leon’s ties to the United Arab Emirates throughout the negotiations only added to a general feeling that the process and participants were not reflective of the desires and interests of the Libyan polity.

The most recent public opinion polls examining support for political parties and leaders in Libya rated the earlier performance of the GNC as poor and showed a sharp decline in support for political leaders and parties. Reflecting this widespread disenchantment with political parties, the second constitutional draft, released by the Constitutional Drafting Authority in early February 2016 provides for a four year ban on political parties in Libya, reminiscent of the bans imposed by the monarchy and the Qaddafi regime. With the vast majority of the Libyan people excluded from the political process leading to the so-called national unity government, reservations about both the process and the participants are understandable. In March of this year, the United Nations belatedly admitted the error in its ways when Kobler called for a grand meeting of Libyan mayors and tribal leaders to generate support for a government of national accord. Following through on this suggestion, which aims to gain the support of the traditional leadership of Libya, is essential to the long-term success of any peace accord.

To establish peace, security, and a working democracy, the international community needs to act as a mediator and guarantor in Libya. A transparent, inclusive political process will ensure a role for all relevant political actors, including elected mayors, tribal leaders, and civil society. The way forward is to incorporate the traditional political model based on tribes and tribalism that has long bestowed legitimacy on Libyan governments.

Ronald Bruce St John has published numerous books and articles on Libya, including most recently Libya: Continuity and change (Routledge 2015).