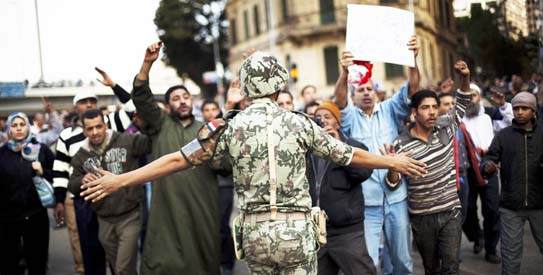 As expected, Secretary Clinton used a national security waiver to override congressional conditions on military aid to Egypt on March 23, repeating a foreign policy mistake the Obama administration has made before: staking out a principled position in rhetoric and then backing down from it the moment the going gets tough. There is a strong and painful parallel between this new decision and the administration’s wobbly mishandling of relations with Israel.

When President Obama took office in 2009, he initially gave Israel the cold shoulder, undertaking visits to Egypt, Saudi Arabia, and Turkey but not to Israel, despite that fact that he intended to launch a major Israeli-Palestinian peace initiative.  Israelis grew suspicious of his intentions. He then staked out a principled position calling for a freeze on West Bank settlements and tried to exert pressure on Israeli Prime Minister Netanyahu.  While the position in principle was correct—burgeoning settlements are demonstrably an obstacle to a two-state solution—the administration had no viable strategy for promoting it and caved as soon as US domestic political pressures began to build.  Thus Obama gained neither the love nor the respect of Israelis, who feel they cannot trust him with their welfare but also that they need not fear any consequences if they go against him.

Now the Obama administration is going down the same unhappy road with Egypt.  First, they failed to show strong support for the Egyptian revolution, which they could have done by offering a compelling package of economic support including a willingness to negotiate a free trade agreement once Egypt was ready.  As concerns grew in Washington about military mismanagement of the transition and growing pressure on civil society, the administration at first fought congressional attempts to impose conditions on military aid.  Once American civil society organizations were closed down and several American citizens—including the son of a cabinet official—were accused of wrongdoing and prevented from travel, the administration adopted a principled position of withholding military assistance until the matter was resolved.  But after the Americans were allowed to leave Egypt (even though all are still on trial as are their Egyptian colleagues left behind) pressure began to grow from defense contractors in the United States to keep the money flowing to the Egyptian military.  As with Israeli settlements, the administration quickly caved to pressures from within the United States and abandoned its principled position on behalf of civil society in Egypt.

So where will this leave the Obama administration with Egypt?  Just as with Israel, Obama will have earned neither the love nor the respect of Egyptians.  And it is from that disadvantaged position that the United States will have to start the difficult process of building a new bilateral relationship with a changing Egypt, once the military (on which the United States continues to double down) leaves power and a new president and cabinet step in.  (See my new policy paper with more thoughts on a US-Egypt reset.)  Will showing that Americans sacrifice our principles at the first sign of inconvenience stand us in good stead with a new civilian Egyptian leadership, especially one with a heavy Islamist presence?  Not likely.

Michele Dunne is the director of the Atlantic Council’s Rafik Hariri Center for the Middle East. She can be reached at [email protected]. Photo Credit: AP