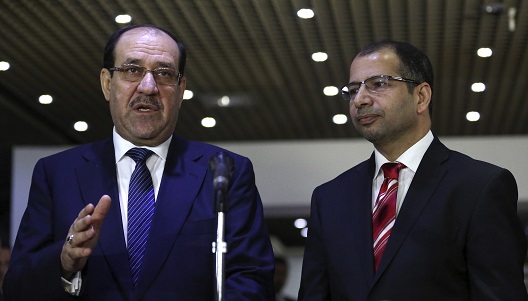 Iraq’s parliamentarians elected a new president last week, advancing the process of forming a government to the most vexing phase in determining who will become the next prime minister. The ideal scenario is that Prime Minister Nouri al-Maliki recognizes he does not have the support of a parliamentary majority, and concedes power to an alternative and consensus Shia Arab candidate. But despite growing speculation that Shia centers of power want him out, Maliki continues to be adamant about remaining in his post. The coming weeks are now likely to be Iraq’s make-it-or-break-it moment.

Last week, a series of reports pointed to dwindling support for a third term for Maliki, both from inside and outside Iraq. According to the Wall Street Journal, “high-level delegations of Iranian military officials and diplomats held a flurry of meetings in Baghdad and the Shia religious capital Najaf, where they were told that Mr. Maliki, a Shia, has lost the confidence of all but his most loyal inner circle.” Citing Iraqi officials, the report also stated that Grand Ayatollah Ali al-Sistani, the most senior Shia religious figure in Iraq, had sent a letter to Maliki earlier this month that opposed a third term for the incumbent, in addition to Iran beginning to shift its support away from him.

The Associated Press reported that Maliki had refused a request by Qassem Soleimani, the commander of Iran’s Quds Force, to step aside during a recent meeting between the two in Baghdad. Citing an Iraqi official that attended the meeting and another briefed about it, the report stated that the Iranian general was “taken aback” by the prime minister’s refusal to oblige and concede power.

If these accounts are correct, they indicate a major blow to Maliki’s prospects in retaining his position. Nevertheless, they are not a fatal blow.

According to Iraq’s constitution, the president must now designate the leader of the “largest bloc” within fifteen days to form a government. That status currently falls to the pan-Shia National Alliance, which consist of Maliki’s State of Law (SOL) coalition and the Iraqi National Alliance (INA), which the parties of Shia clerics Muqtada al-Sadr and Ammar al-Hakim currently dominate. Last week, false rumors promoted by some parliamentarians had circulated that Iraq’s Chief Justice Medhat al-Mahmoud—who is widely speculated to be under the influence of the prime minister—had declared that the SOL constituted the largest parliamentary bloc.

Nevertheless, the non-event and unsubstantiated rumor suggests a possible future scenario: the State of Law could end up as the “largest bloc,” and not the National Alliance, giving Maliki the first opportunity to form the government. As Iraq historian Reidar Visser points out, if the National Alliance is unable to appoint a nominee for the premiership, an argument can be made that it no longer constitutes the “largest bloc.” In other words, what matters is the combination of the “largest bloc” and a nominated leader. Hence, the failure of the Shia parties to agree on an alternative candidate would benefit Maliki’s position, since the SOL already has him appointed as its leader while representing the largest political entity outside the National Alliance.

Maliki’s short-term tactic may be to stall and have the fifteen days run out, without an agreed upon Shia candidate to nominate for the premiership. In 2010, the same struggle between SOL and INA played out within the National Alliance: who would lead the pan-Shia bloc? Back then, SOL had eighty-nine seats, and INA held seventy seats. While INA had nominated Shia politician Adil Abd al-Mahdi to face off against SOL’s Maliki, the two sides could not agree on a single candidate to represent the National Alliance. The deadlock only ended when Sadr succumbed to Iranian pressure and cut a back-room deal with Maliki. Today, the balance of power within the National Alliance even more strongly favors the SOL, but Maliki is less likely to have Iran lobbying on his behalf.

Stagnation could result within the National Alliance, especially if Maliki clings to his position. From one standpoint, the INA may have boxed itself in, unable to move forward with an alternative candidate without first having Maliki concede to step aside. They have placed their bets on Iran’s ability to put pressure on the prime minister, which thus far has not worked. While components of the INA could threaten to break away from the National Alliance and form a larger bloc by partnering with Sunni Arabs and Kurds, such action carries the risk of retribution from their Shia constituencies and Tehran. Moreover, it could force Iran to shift support decisively in the favor of State of Law. Indeed, while Tehran does want to implement a policy that is clearly in contradiction with Sistani’s preferences, it becomes more difficult to move decisively against Maliki if the INA is cooperating with Sunni Arabs and Kurds in forming a cross-sectarian government outside of the Shia-fold and its sphere of influence.

Therefore, the dynamics within the State of Law coalition may be the key to how the final stage of the government formation process unfolds. If the bloc stays loyal to Maliki in the face of pressure, he could at the very least have the first crack at forming a government. According to the constitution, the time allowed for this is thirty days. Maliki would most certainly attempt to bribe his way to gaining majority support in parliament by cutting the necessary deals and allocation of positions in bringing others aboard.

Maliki’s rivals do not want to risk giving him the opportunity to lure allies over to his side. Outside the prospect that the prime minister concedes power to another, their hope is that the State of Law cracks under pressure, whereby elements shift away from Maliki and bandwagon towards an alternative leadership.

Ramzy Mardini is a nonresident fellow at the Atlantic Council’s Rafik Hariri Center for the Middle East.

Image: Iraqi Prime Minister Nuri al-Maliki (L) speaks next to speaker of parliament Salim al-Jabouri during a news conference after their meeting with in Baghdad July 26, 2014. (Photo: Reuters)