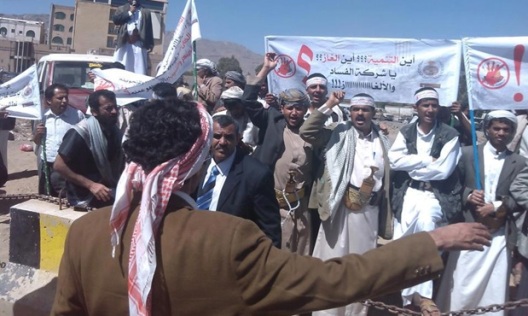 Over the past few years, Marib, a tribal area 120km northeast of Sana’a, has made the headlines for all the wrong reasons. It has allegedly been a staging ground for al-Qaeda in the Arabian Peninsula (AQAP) operations targeting security and military personnel as well as oil pipelines. When the popular protests started in early 2011 demanding the removal of then-President Ali Abdullah Saleh from power, Marib was the source of frequent attacks on oil pipelines and the main power plant, leading to severe shortages in electricity and fuel supply throughout the country until today. But these security threats overshadowed a nascent and active youth movement.

Early on in Yemen’s transition, Maribi youth led a vibrant and increasingly thriving campaign of civic activist. During the popular protests in 2011 and 2012, Maribis established a tent in Marib city from which they organized civic education sessions, social media activities, and regular protests. Maribi youth joined other protesters from all over the country in Sana’a’s Change Square. Coming from well-armed tribes where they are considered tribal warriors, their participation in peaceful protests came as a surprise to many activists.

Following the ouster of former president Saleh in November 2011, Maribi youth seized the opportunity to actively engage in the transitional process and bring attention to the issues facing their communities. In September 2012, dozens of young activists from Marib’s main tribes and administrative districts announced the Marib Cause Initiative. In August 2013, another group of young Maribis established the Sheba Movement (al-Harak al-Saba’ie), another youth movement with the purpose of expanding advocacy and mobilizing efforts initiated by the Marib Cause.

Both youth-led movements demand that a percentage of oil and gas revenues go towards the most needed development projects in their province. As one of two primary sources for crude oil in the country and hosting the largest gas deposit (in use since 2005), the Yemeni government draws 75 percent of its budget from Marib. Power lines feed the Dhahban power plant, the main source of electricity for Sana’a and other major cities in Yemen. Despite its natural energy resources, however, Marib lacks basic services.

Until 2012, only two of Marib’s fourteen districts received enough electricity to power their homes for most of the day. After 2012, the new Marib governor’s efforts provided electricity to another four districts using generators. Large parts of those districts, however, remain without electricity. Most people have no access to health or education services with the only university in the province currently closed. Unemployment, poverty, illiteracy, and increasing conflict characterize a place that was once the home of the great civilization of Sheba. Unchecked extraction by oil companies affect ground water, agriculture production, and cause health problems in local communities. Marib’s large concentration of military and security forces are largely perceived as corrupt and ineffective. Continued marginalization of Maribis has led to grievances that consequently contribute to sabotage and insecurity.

“Marib has been ignored by the government for more than five decades. They look at us as inferior to them. The political elite in Sana’a care only about oil and less about the people of Marib,” says Ahmed Azzayedi, a young activist named by the youth movement and prominent civil society organizations as a prominent youth leader in Marib for 2013. Maribis have no place in top government positions. There are no ministers or ambassadors from Marib for example. “There are well educated and experienced Maribis but the government and oil companies hire people from outside the provinces,” says Nasser Mohtam, head of media for the Sheba Harak. Local citizens suspect the oil and gas revenue from their province goes to the pockets of power-brokers in Sana’a and to the development of other parts of the country while Yemeni officials continue to ignore Marib and deprive residents of basic services.

Since the political transition process began in late 2011, the Marib Cause Initiative organized more than thirty rallies in Sana’a addressing the cabinet, the National Dialogue, and oil and gas companies that operate in the province. They mobilized influential tribal leaders and social figures in their areas. In May 2013, they gathered hundreds of tribesmen—including prominent tribal leaders, parliamentarians, local political party representatives, and local government figures—for a conference in al-Saheel, a commonly recognized tribal sanctuary and conflict-free zone. During the conference, participants agreed on key advocacy issues to be addressed at the national level on behalf of Marib. A week later, the group organized a follow-up three day conference in the capital city of Sana’a in which they came up with a vision and a list of clear and well-articulated demands that was handed to the National Dialogue Conference (NDC).

The results of the national dialogue were disappointing, according to Hassan Azzayedi, spokesperson for the Marib Cause. “The National Dialogue Conference failed to incorporate our vision and demands. Despite our effort to reach out to them, they chose to ignore us”, said Hassan. As a result, both the Marib Cause and the Sheba Movement announced their escalation plan. In November 2013, they jointly issued a “Final Warning” statement and held a protest at the Safer National Oil Company and the Yemen Liquid Gas Company in Sana’a, naming them the “thieves who took everything and gave nothing back.”

At a January 2014 conference in Marib city, the Marib Cause Initiative and the Sheba Harak established what they call Alfaza’a Asha’abiya (popular uprising) and formed a joint committee to represent them. The conference produced a statement of twenty-two points demanding fair political representation, a share of the oil revenues for development, environmental protection, and education opportunities for Maribis.

After three years of constant organizing, lobbying, and mobilizing, the activists succeeded in getting a meeting with the President Abdrabbo Mansour Hadi to articulate their demands. More than 200 political party representatives and tribal leaders from the province joined the meeting. The youth felt that political party representatives intentionally dominated the discussion, resulting in few tangible gains. “We wanted to at least be able to interact with the president or ask him questions but we were not allowed,” says Mohammed ben Jalal, the Marib Cause representative. In retaliation, some leaders of the Cause and Harak deployed armed youth in Marib to prevent gas trucks from reaching Sana’a. “We hate to do that but unfortunately this is the only way to get the government to listen and deliver,” says Mahdi Balgheith, a member of the youth movement. A fair number of the Cause members, however, were not on board. “Our movement is peaceful. Blocking roads and disrupting gas trucks movement is not,” says Adel Assalahi, a founding member of the Cause. The escalation, however, paid off. The president formed a sixteen-member committee to address Cause and Harak concerns. But almost a month after the committee’s inception, the youth still struggle to meet with its members. “This only tell us that the government is not serious about addressing our grievances,” says Ben Jalal.

Young people in Marib have grown independent, strong, and increasingly frustrated by what they call systematic neglect. They do not trust the government or political party representatives—some of whom are prominent tribal leaders from their province. They also believe, like many Yemenis, that officials use presidential committees to brush aside important issues. As their patience grows thin, young Maribis could systematically block energy production to pressure the officials into paying attention to their demands—a step that neither the government nor Yemen’s transition can afford. While the government and its international partners remain preoccupied with the political transition, local grievances remain unaddressed and new ones are surfacing, further increasing the gap between the people and the state. The implications for the already fragile economy and the Yemeni government’s legitimacy will be daunting.

Image: Yemenis protest, holding signs saying, "Where is the development? Where is the gas?" in Marib. (Photo: Mareb Youth Facebook page)