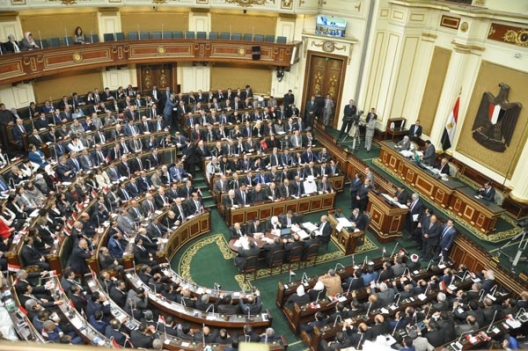 Egypt’s newly-elected parliament, which convened for the first time on Sunday, differs from its recent predecessors in many ways. Most notably, it is the largest parliament in Egypt’s history, but within its hundreds of members, no single party or group has secured a majority. Before the final parliamentary election results had been officially declared, however, a group of high-profile parliamentarians had already announced the formation of the ‘In Support of Egypt’ coalition—a majority parliamentary bloc—one which supports the policies of Egypt’s President Abdel Fattah al-Sisi.

Sameh Saif al-Yazel, a former intelligence officer, and head of the pro-Sisi For the Love of Egypt electoral coalition, is spearheading the parliamentary bloc. For the Love of Egypt, a list which included at least 11 political parties, including the Wafd, Free Egyptians, Conference, and Future of the Homeland parties, as well as independent figures, and members of the now defunct National Democratic Party, secured all 120 party list seats in the elections. With the elections over, however, the list has already parted ways, with not all parties joining the new bloc.

Salah Hasballah, a parliamentary member and founder of the Horeyya (Freedom) Party, who joined the bloc explained to EgyptSource why it was formed. “We didn’t form this coalition for the sake of supporting the government but for supporting the Egyptian people and state sovereignty,” Hasaballah said. “The main challenge facing this parliament is issuing laws and legislation which will serve the interests of a stable state,” he added. Hasaballah says that preparing these laws requires time and effort, and a solid bloc is necessary to guarantee the process.

According to Hasaballah, 380 members of parliament have already joined the coalition, but he expects at least another 20 to join. “This means that we can secure a majority by controlling two thirds of the seats.” This would give the bloc the power to approve or push back on any laws put forth before the parliament.

Yousry al-Azabawi, an expert at Al-Ahram Center for Political and Strategic Center, however, believes the coalition is not planning to oppose the president’s policies. “This coalition is considered the more organized version of For the Love of Egypt. I see that it includes many independent figures that don’t have specific political ideologies, but they announced their support for the state.” He explains, “The main difference between For the Love of Egypt and the new bloc is that the former will be operating with a bylaw, which will make its dynamics apparently more clear and organized.”

Bloc member Hasaballah, explains that the coalition includes seven political parties. Among them are the Future of the Homeland, led by 24-year-old Mohamed Badran, and the Conference party which was founded in 2012 by Amr Moussa, Egypt’s long-term foreign minister under Mubarak.

The coalition, however, has had a rocky start. Badran’s Future of the Homeland Party, which secured 51 seats in the parliament, withdrew from the coalition, only to return three days later, after what party spokesman Ahmed Samy described as assurances that the party would enjoy “higher representation” within the group.

Other parties who refused to join the coalition altogether despite running on the For the Love of Egypt list include the Free Egyptians and Wafd parties, each of whom secured eight seats by running with the pro-state electoral coalition.

The Free Egyptians party, which secured 65 seats, the highest number for any political party, issued an official statement in December about the parliamentary bloc. In it, the party expressed its concern over the coalition. The statement said, “The regulations made by the bloc [In Support of Egypt] follow a political party description in its formation and definition. This bloc first started as an electoral list, and then turned into a political party without receiving a permit from the parties’ committee.” In a television interview, FEP founder and Egyptian tycoon, Naguib Sawiris, went so far as to compare the formation of the coalition to the tactics of the Muslim Brotherhood.

The Wafd party, Egypt’s oldest political party, which won 45 seats in the parliament, also said it would not join a parliamentary bloc, including the Support Egypt bloc.

“The Wafd’s stance does not surprise me, as they sometimes prefer to play solo depending on their legacy as an old political party who has its own supporters and policies,” he added.

“We elected Saif al-Yazel as the head of the coalition three weeks ago and following the early sessions of parliament, we will hold internal elections within the coalition in which we will select a political bureau.” These selections, Hasaballah explains, will include a head for each of the seven parties who are members of the coalition, as well as thirteen independent MPs, two deputies, and a media spokesperson.

“It’s a flexible coalition eyeing a majority, regardless of the players, as long as they agree and vote in favor of state sponsored laws,” Azabawi says. It is for this very same reason, he argues, that the coalition may face many rifts, withdrawals, and concessions as some of its figures are already vying for top posts within the parliament.

This scenario began to play out almost instantly on the eve of the first parliamentary session. Following an internal vote within the coalition, Saif al-Yazel, announced on Saturday that it would back the now-elected speaker of the parliament Ali Abdel Aal, a constitutional expert and a member of the coalition. They also voted to back both independent parliamentarians El Sayed Mahmoud El Sherif and Alaa Abdel Moniem for the two deputy positions.

Mustafa Bakry, a veteran parliamentarian who was among the top figures of For the Love of Egypt, had also run in the internal elections for the deputy post but secured only 124 votes, with Sherif securing 171, and Abdel Moniem, 155. Bakry consequently announced his withdrawal from the coalition, questioning the results, and implying that Saif al-Yazel and other members received orders from above to back certain figures in the vote. He announced he would run for the post independently, but by Sunday a resolution appears to have been reached and Bakry said he would not be running. Saif al-Yazel himself also said that if Bakry ran, he would be removed from the coalition.

Getting off to a rocky start, it remains to see whether this coalition will remain in its current form, and what it will contribute to Egypt’s new parliament.