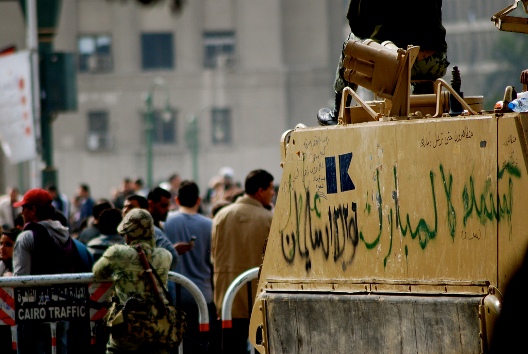 With discussions up to the last minute, the fifty-member Constituent Assembly, tasked with re-writing Egypt’s Constitution, has made a final decision on one of the body’s most contentious issues: military trials for civilians.  On November 20, the Assembly voted in favor of maintaining military trials for civilians, despite the significant implications that such a decision has for a country contending with its democratic transition. The Assembly, while markedly more diverse than previous iterations of the same body, has adopted a text which appeases the military establishment and lists out an expansive and vaguely-defined set of circumstances in which a civilian may be tried by the military judiciary.

Previous Egyptian constitutions have largely dealt with the issue of military trials by recognizing their presence, but leaving their jurisdiction and features up to determination by the law. While the 1954 Constitution explicitly barred civilians from trials in front of military or exceptional courts, the 1971 Constitution stayed largely silent, stating: “the law will regulate the military judiciary…” A similar provision was included in the 2011 Constitutional Declaration issued by the Supreme Council of the Armed Forces in the wake of the January 25 Revolution, and in the current Constitutional Declaration that governs the nation. The 2012 Constitution, written by a largely Islamist Constituent Assembly, marked the greatest and most problematic departure from the trend, when it stated in Article 198 that civilians could undergo military trials for “crimes that harm the Armed Forces.”

Maintaining much of the spirit of the 2012 Constitution on this issue and further expanding on it, relevant segments of Article 174 of the current draft, if approved, will read: “There will be no military trials for civilians other than when there is a direct attack on the Armed Forces’ facilities, camps, military areas, borders, equipment, vehicles, weapons, ammunition, documents, military secrets, public funds, or factories; or draft-related crimes, or direct assaults on personnel and their families (in light of their job duties). The law will define such crimes & determine the jurisdiction of the military judiciary.”

There is no doubt that civilians underwent military trials under both vague provisions like those of the 2011 Declaration and more explicit texts like the 2012 Constitution. Despite this reality, there is also no doubt that explicitly enshrining a principle in the Constitution, as the 2012 and current draft texts do, empowers the Armed Forces to hold citizens accountable under a system that is inherently non-civil and violates a citizen’s basic rights to a fair trial, representation, and process. Unlike verdicts issued by civilian judges, military verdicts cannot be appealed. Trials are often speedy and deprive civilians of their due process rights. Furthermore, most military trials for civilians involve a military party and a civilian party; there are serious questions about whether a military judge will be able to overcome his inherent bias towards the military party in a conflict.

Since January 25, the Armed Forces have hauled in up to 12,000 civilians, by some estimates, to undergo military trials, almost six times as many as ousted president Hosni Mubarak ordered throughout his three-decade-long rule. These trials have implicated a variety of different actors, including artists who have drawn graffiti on the Egyptian streets, journalists who have conducted coverage in military areas, and protesters who have demonstrated outside of prisons. While public pressure from groups like No to Military Trials has been key in creating an environment in which the Armed Forces can be better held accountable, military trials remain a means by which to crack down on protesters, revolutionaries, and thinkers, all under the guise of fighting terrorism, safeguarding national security, and protecting the sanctity of the Armed Forces.

The text of Article 174 lays out a laundry list of circumstances in which civilians may be tried by the military judiciary. The extensive description creates situations in which it remains possible for journalists to be targeted for anti-army coverage and protesters to be tried for their political opinions and stances. The undefined nature of the phrase “direct attack” allows for almost any military-related occurrence to be considered an offense. In light of the Armed Forces’ approach to the issue of military trials thus far, there is no reason to believe that they will temper their prosecution of civilians under this article. Furthermore, the article again leaves ultimate jurisdiction up to the law, thus providing the Armed Forces with yet another opportunity to define their power bases and maintain their control over the Egyptian people. While there is no doubt that the Armed Forces should be empowered with the constitutional and legal tools necessary to ensure Egypt’s security, infringing upon the rights of its citizenry and limiting their fundamental rights and freedoms is not the means by which to achieve stability.

Two revolutions and two sets of military rule later, our civil and political leaders have made a critical decision with potentially-dire consequences to approve an article which enshrines yet another manifestation of the Armed Forces in our political and judicial systems. Surely the fight continues.