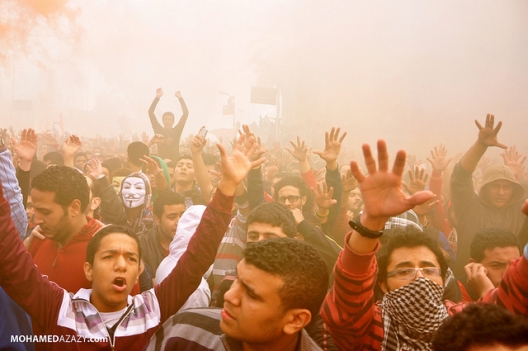 Egypt’s Ultras, organized groups of football fans, shot to infamy with the 2011 uprising. Despite an active presence in the streets dating back several years, 2011 marked a new introduction of the Ultras to the Egyptian public. Suddenly, they occupied a bigger slice of public space, their performance becoming more vocal, and their presence more significant. Mistakenly, several scholars and commentators mark that year as the beginning of the Ultras’ politicization. Close examination of the different Ultras movements demonstrates that their vocal presence in the public sphere, however, does not necessarily entail a political orientation.

In 2007, football fans in Egypt began organizing under the official, and global, banner of the Ultras movements. It all began with fans of Egypt’s two major clubs: Ahly—Ultras Ahalawy—and Zamalek—Ultras White Knights. Prior to this, informal associations and communities served the purposes of passionate and active football cheeringand identifying with a specific entity.

From Heroes to Villains

The Ultras Ahlawy and Ultras White Knights were celebrated as new actors in Egypt’s political landscape in 2011 and their members looked upon as passionate, young, genuinely patriotic Egyptians. Four years later, they are now labeled terrorists and vandals. This process of labeling runs deep, reinforced by a court ruling in May declaring the Ultras an illegal terrorist organization.

The stigmatization of social or political activism, and non-institutional collective organization has impacted most activists in social movements—particularly those who were active during the January revolution and in the events that followed. This stigmatization is mainly due to a repressive strategy towards state challengers adopted in the post-June 30 era—the passing of a repressive protest law limiting street action and the arrest and imprisonment of prominent figures, whether activists or rights defenders, who were at the forefront of the uprising, as examples.

The Ultras are among those most affected by this strategy due to their low media exposure, beyond large, homogenous groups of young men, seen energetically jumping up and down, chanting anti-regime slogans. This increases the likelihood of misperceptions surrounding the groups. They have also been affected by an ongoing ban on football fans attending live matches, leading to the Ultras losing their main space of expression.

Two particularly violent confrontations have also contributed to a negative public perception of the Ultras. Their presence has increasingly become associated with violent clashes despite the fact that Ultras members were the victims of these clashes in both cases. In February 2012, seventy-four Ultras Ahlawy members were killed and hundreds injured after the opposing teams fans stormed the pitch, attacking their adversaries, the police looking on. In February 2015, in Cairo, twenty-two Ultras White Knights lost their lives when police crammed them into a narrow entryway in to the Defense Stadium. The official narrative claims that fans without tickets attempted to storm the stadium, while the Ultras maintain that they were forced into a narrow entrance, trapped, and teargassed leading to a stampede that killed dozens.

Despite all attempts to neutralize these movements, they remain resilient, with a degree of solidarity that does not appear to be present among other social movements in Egypt. This resilience was highlighted last month, when a conflict broke out between Ahly and the Egyptian Football association, the Ministry of Youth, and the Ministry of Interior over the location of a match between Ahly and Zamalek. Ahly objected to playing the match in the Red Sea’s Gouna, offering to play in Cairo, Alexandria, or Suez. The Ministry of Interior objected to having the match played in any of those cities due to security measures. As the problem escalated, Ahly’s Ultras organized themselves in support of their club, gathering in a protest in the thousands. The pressure applied on the state resulted in the Prime Minister’s intervention in the issue and the match was eventually played in Alexandria.

The presence of Ultras members in different political activities like the 18 day sit-in calling for Hosni Mubarak’s ouster in Tahrir Square in 2011, or subsequent clashes between revolutionary protesters and security forces in Mohamed Mahmoud street months later, or even their pro-revolution and anti-military chants have led to the perception that the Ultras are political movements, or social movements with a political agenda. However, the structural nature of Ultras movements demonstrates a line that separates group action from individual choices. They don’t adopt a vertical structure of leadership. Outside football stadiums, Ultras movements do not dictate a specific course of action upon their members. Analyzing the movements’ discourse and actions requires a distinct awareness about the difference between individual actions of members and orchestrated group action of the movement in its collective sense.

Despite the unquestionable solidarity in support of their football teams—political orientations of members vary significantly. Within the ranks of each movement, exists a wide spectrum of political orientations including leftist, liberal, Islamist, and secular. “Many members have little interest in politics to begin with,” Hossam Abdelmoneim, a leading figure in Ultras White Knights in Alexandria explains. Until today, members say that the ‘official’ presence of the movements in Tahrir Square in 2011 remains a contentious matter.

This is not an attempt to undermine the presence of collective values and beliefs inherent within Ultras movements. Values like liberty, dignity, belonging, solidarity, and equality constitute a kind of a raison d’etre in all Ultras movements. The Ultras’ recurrent clashes with state or non-state actors usually revolve around issues that collide with these values: repression and the closing of public space. Since the movements’ emergence in 2007, the Ministry of Interior has treated them with outright repression, violence, and humiliation. The concept of organized or orchestrated collective presence in public space was something that Mubarak’s Ministry of Interior did not tolerate. Moreover, the lack of social, political, and professional elites within the ranks of the Ultras movements, and the prevailing relatively young age of movement members, gave security forces a further excuse for more violent responses compared to responses to episodes of collective action organized by political forces or professional elites.

The issues Ultras movements fight for are related mainly to the collective support of an entity, and to a profound meaning of belonging to and identifying with that entity. There is an apparent difference between fans who watch the games on television and go to the stadium occasionally for important matches, and Ultras members who dedicate time, effort, and resources to supporting their team, and engaging in this process until belonging to this team becomes an integral part of their identity.

Therefore, the recurrent clashes with the police are neither anti-state nor anarchist in nature, but rather a struggle to realize basic rights that revolve around non-violent practices. However, it is becoming increasingly apparent that the free use of public space, whether it’s a football stadium, a public square, or even a university platform; is not a right authorities are willing to grant to the Ultras or other collective actors.

The Ultras are not political movements, despite all attempts to politicize or co-opt them. Additionally, the movements are not inherently violent. They are often the target of violence rather than the cause of it. Rather than attempt to pigeonhole or curtail the Ultras, what is needed is a vision regulating their presence, one that stems from accurate understanding of the nature and purpose of these movements rather than simply incriminating them due to a difference of opinion. Banning these movements will yield nothing other than blind discrimination, hateful extremism, and a further distorted sense of identity.

Ziad A. Akl is a senior researcher in the Egyptian Studies Unit at the Ahram Center for Political and Strategic Studies since 2005. He speciaizes in social movements & contentious politics, citizenship & religious diversity, political culture, and Libyan politics.