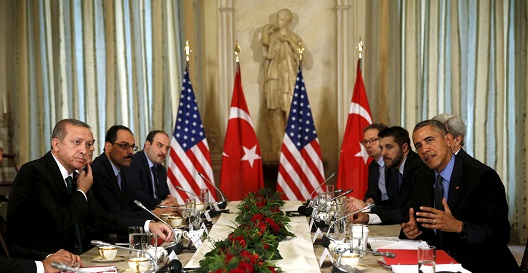 Turkey and the United States share strategic interests regarding Syria, not least defeating the threat posed by the Islamic State (ISIS or ISIL). However, they remain at odds over their definitions of their full strategic purposes. One element is ripe for resolution: clarifying their respective intents toward the Kurdish communities of Syria, while revising their dealings with the Syrian Kurdish Democratic Union Party (PYD) and the Kurdistan Workers’ Party (PKK). The latest bombing in Ankara underscores the urgency of tighter allied cooperation against the PKK and the diverse array of regional threats.

The allies’ split is plainly worsening. The United States openly collaborates against ISIS with the PKK’s Syrian wing, the PYD. Besides Ankara’s harsh condemnation of US-PYD alignment, it also maintains that the Assad regime’s violence against its people sustains ISIS. Hence, to defeat ISIS, Turkey demands that the United States use military pressure to back diplomacy ultimately to force Assad from power—and more immediately, to desist in his depredations against the population.

The allies are also divided over cooperation with various armed Syrian factions: the United States refuses to work with certain armed Islamist rebels supported by the Turks and others.

Each side’s strategy is muddled and their strategic disagreement only compounds their problem to the benefit of their adversaries. Mitigating at least one of their most serious disagreements—regarding the role of the Syrian Kurds—is necessary to increase their military impact against ISIS and critical for the future of the Kurds and others in northern Syria.

The United States sees the PYD as the most capable and committed partner against ISIS in Syria, but Ankara has good reason to view the US-PYD relationship with deep suspicion: the PYD is undeniably and organically linked to the PKK, designated by the United States and Europe as a terrorist group. Ankara rhetorically does not differentiate between the two groups. Washington does distinguish between the PYD—which had publicly declared a willingness to live in peace with Turkey and denied responsibility for the February 17 bombing—and the PKK. The latter resumed its decades-long insurrection against the Turkish Republic in July 2015 after a two-year ceasefire had allowed the two sides to progress toward a peace agreement.

Until US emissary McGurk’s January 30 visit with the PYD leadership and the February 17 bombing, the Turkish government had implicitly accepted the US distinction between the PYD and the PKK, with one key exception: the PYD’s presence in northern Aleppo. In Iraq, Turkish warplanes have been bombing PKK targets since late July. In Syria, however, Ankara had indicated that it would only strike PYD targets if fired upon or if the PYD threatened Turkish border towns. Turkey had been shelling the PYD in northwestern Syria in response to PYD threats and has stepped up its offensive since the February 17 bombing.

Washington and Ankara could yet foil the primary spoiler in their strategic approaches toward Syria: the PKK. The United States need not adopt new policies on these issues, but it would require effective and unequivocal communication of its strategic intentions to the PKK and its PYD affiliate (no less than to Turkey and Kurdish partners in Iraq) regarding the future of the Kurds of Turkey, Syria, Iraq, and for that matter, Iran. Such direct communication might depart from longstanding US rejection of acknowledged direct official contact with the PKK. Yet the Turkish government itself communicates directly, if episodically, with the PKK’s imprisoned leader Abdullah Ocalan and less directly with other senior PKK figures in Qandil and Europe. Turkish officials also acknowledged publicly that they met several times with PYD representatives since at least 2013.

To the PYD, the United States should make crystal clear that continued US military support is contingent on scrupulous observance of its de-facto non-aggression arrangement with Turkey and respect for Turkish redlines along the border. That means a unidirectional PKK-PYD relationship: no material PYD support for the PKK’s armed conflict with Turkey. Contrariwise, to the extent that the PKK might shift its fighters, weapons, and any other material support out of Turkey and into the PYD’s and allied fight against ISIS, such action would benefit all allied interests.

To the PKK, the United States should amp up the pressure for a long-overdue strategic decision by directly and strongly communicating its standing public policy line, while affirming its willingness to discuss a path to a different future: as long as the PKK remains in armed conflict with Turkey, the United States will continue to provide all possible support to the defense of our NATO ally. Alternatively, at such time as the PKK may reject armed conflict or choose to shift its entire armed activity to the defense of the Kurdish communities of Syria, the United States should consider suspending its designation of the PKK as a Foreign Terrorist Organization.

US communication with Turkey, as an ally, is and must be different in manner and substance. The United States should positively support any moves by Turkish President Recep Tayyip Erdogan to revisit the deep-frozen peace negotiations with the PKK—provided the PKK disarms and ceases its attacks. No one should underestimate the degree of political risk any such openings would impose on the Turkish leadership, but only such a step can break the impasse. The United States should also explicitly review, clarify, and reaffirm with Turkey their common purposes regarding Syria, including seeing an end to Russian, Iranian, and Assad regime attacks on Syrian civilians.

Ankara could help by refocusing its rhetoric and its diplomacy on rallying international support against the PKK, its enemy, rather than playing into PKK and Russian hands by identifying its US ally with its enemies. The two allies have ample cause for their mutual frustration. But such a meeting of official American and Turkish minds is essential to bring the Kurds into a fully effective alliance against ISIS and to facilitate coordination with other Syrian opposition, Arab, and European allies.

Washington and Ankara have every interest in collaborating to bring the PYD and the PKK to see the strategic realities. It will behoove the PYD and all the political groups and ethnic communities of northern Syria to heed Turkish security interests now and in the post-Assad, post-ISIS future. Turkey is not merely the key supporter of the most powerful Syrian rebel groups, most of which are hostile towards the PYD. It also remains the most powerful external force shaping the future of the Kurds and other ethnic and confessional constituencies of Syria, long after Assad, the Russians, and Iranians have passed from the Syrian scene and Western attention turns elsewhere.

The PKK and PYD play a dangerous game when they join Russia in attempting to play NATO allies against each other, and bet on Russia and Assad to protect them in the long run from their own non-Kurdish Syrian neighbors, Turkey, and her allies.

Francis J. Ricciardone is an Atlantic Council Vice President and the Director of the Rafik Hariri Center for the Middle East.

Aaron Stein is a Resident Senior Fellow at the Atlantic Council’s Rafik Hariri Center for the Middle East.