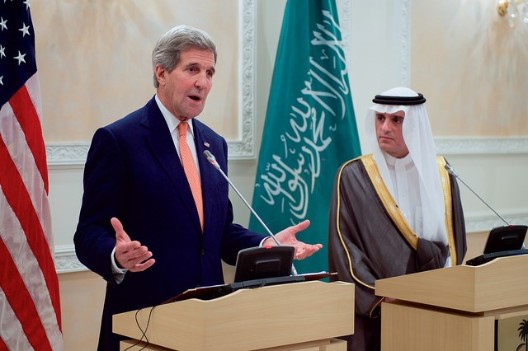 The purpose of the upcoming summit at Camp David between President Barack Obama and leaders from the countries of the Gulf Cooperation Council (GCC) is clear. America’s traditional partners in the Gulf feel nervous in the wake of an announced framework agreement that will allow Iran to keep its latent nuclear weapons capability, while providing Tehran with billions of dollars of sanctions relief that it can use to expand its malign influence in Iraq, Syria, Yemen, and elsewhere.

In response to this fear, the United States has summoned Arab leaders to Camp David in order to provide them with reassurances of Washington’s commitment to their security. As the Wall Street Journal has reported, GCC leaders will seek advanced military capabilities—such as the F-35 aircraft—and possibly even formal security guarantees. Such measures along with strong words of support from President Obama might just be enough for Washington to win reluctant regional backing for its controversial Iran deal while shoring up its traditional partnerships. There is just one glaring problem: the administration has different ideas.

Rather than a simple opportunity to assure Gulf partners, Obama administration officials see the Camp David meetings as a two-way street. In addition to promises to provide aid to the GCC, Washington also plans to make demands. In particular, it will request that the GCC scale back its role in the ongoing sectarian conflicts now roiling the Middle East. It is reasonable that Washington would ask something in return for its promises to bolster the GCC and such steps would be consistent with the administration’s perplexing pattern of criticizing friends and giving a pass to enemies, but requests for Gulf partners to refrain from taking steps that they see as necessary for protecting their interests in the region are misguided for at least three reasons:

A healthy give-and-take should be expected within any alliance relationship, but unless the Obama administration wants to add this “historic” summit to its already long list of blunders, it should make Camp David a strictly give-and-give affair.

Matthew Kroenig is a Nonresident Senior Fellow in the Scowcroft Center for Strategy and Security at the Atlantic Council and an Associate Professor and International Relations Field Chair in the department of government at Georgetown University.