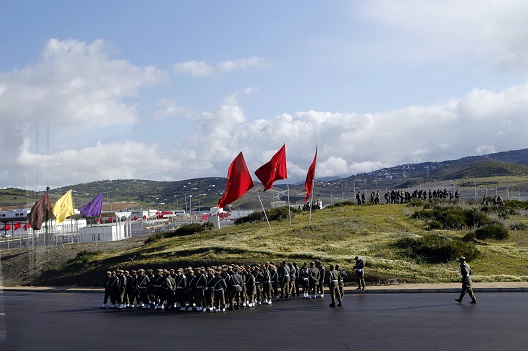 If passed by the country’s two parliamentary chambers, an expedited draft law 44.18 would reinstate mandatory military service for both Moroccan men and women between the ages of nineteen and twenty-five by the end of next year. The announcement fell on the same day as King Mohammed VI’s speech on the 65th Anniversary of the King and People’s Revolution, August 20—a public holiday commemorating a turning point in the country’s struggle for independence from the French—in which he urgently appealed to the nation and government to address the country’s persistent youth issues including unemployment, idleness, and lack of opportunity.

The final text of the draft law has not yet been passed, but it has already generated confusion and debate from a concerned Moroccan population that wonders how mandatory military service will address festering economic and social issues that remain front and center priorities for Morocco’s youth. Official rhetoric about the pending military conscription largely frames the proposed law in terms of enhancing patriotism and citizenship among the youth. However, if this is the government’s answer, it must take steps to better communicate the purported benefits of conscription, and channel citizens’ concerns through the country’s institutionalized legal consultation mechanisms.

Should the conscription law indeed go into effect, it will face a challenging environment. Despite overall growth in the country, recent figures show that 29.3% of Moroccan youth between the ages of fifteen and twenty-four do not work, are not in school, and do not participate in any kind of training or professional development. The past two years have seen heightened tensions in Morocco as protests—many led by youth—over social and economic conditions spread in the northern Rif city of Al Hoceima and the mining town of Jerada. These figures, combined with the king’s speech demanding that economic and social programs produce better options for the youth, have set a tone and urgency in creating a better future for this demographic. Given this context, the new draft law appears tone-deaf—tackling tangential issues of patriotism and citizenship while avoiding the pressing matters of employment and basic opportunity.

In official statements, the government stressed that the conscription bill would enhance Moroccan youth’s sense of citizenship and responsibility to the nation, and allow them to contribute to the country’s development. This discourse is framed within the constitution’s Article 38 that tasks both men and women with defending the country and its territorial integrity. Service would last for twelve months and offer similar benefits as professional enlistment, including compensation, housing, and health insurance. Evasion is punishable by sentences of one to three months and fines of around $200 to $500. Exemptions include married citizens, individuals who are handicapped or have a physical illness, individuals who are financially responsible for their families, and youth who are serving a prison sentence of more than six months or have an active criminal record.

When the draft law was announced, there was confusion and alarm about whether citizens with dual nationality would have to serve. Since then, some officials have clarified that the duty only applies to Moroccans living within the country. Instead of answering questions about the draft law in a piecemeal format, these conversations should be held as part of a broader official dialogue.

The draft law is not Morocco’s first attempt at mandatory military service. On June 9, 1966, a royal decree introduced an eighteen-month mandatory military service—optional for women—which was later reduced to twelve months. In 2007, King Mohammed VI abolished mandatory military service on an “exceptional” basis, which some analysts speculated was a result of fears that terrorist groups would try to infiltrate the Moroccan army. Moreover, the conscription law was not adequately enforced due to limited government resources. These challenges could also plague the new draft law, with critics already pointing out that these funds could instead be allocated to the education system or jobs training, which could help instill the same values of discipline and responsibility as the military.

The approval of the bill at the government level was completed in an unprecedented time, without a public dialogue or consultations to discuss provisions, thus coming as a surprise to many. Without a final bill to examine, many have begun speculating about its contents. Perhaps the most fundamental point regarding the draft law is that soldiers are conscripted by the state and not enlisted voluntarily—a particularly risky initiative given the already fraught relationship between the youth and the state. Some also worry that obligating women to enlist in the military will raise the ire of Moroccan families who would not want their single daughters to serve alongside men. Other Moroccans are concerned that conscription will disproportionately impact individuals from lower social classes, and use slogans such as “the nation is for the rich and nationalism is for the poor.” A Facebook group called “Moroccans Rally Against Compulsory Military Service” was created, and members have already published a statement against draft law 44.18, arguing that the millions of dirhams (estimated at $300 million a year) that would be allocated for military training could instead be invested in the socio-economic development of youth. The group already has more than 15,000 members, and hundreds of posts in the past month alone.

Other Moroccans see the value in mandatory military service. Despite youth discontent, these individuals believe the bill is a commendable initiative that will provide young people with a meaningful career, skills, and opportunity to give back to the country. Article 6 of the draft law indicates that conscripts with technical or professional skills can be integrated into additional roles within the military for further career development. While the majority of the world’s countries have done away with mandatory military service, other states in the Arab world have returned to conscription in recent years, including the United Arab Emirates, Qatar, and Kuwait. While some conscripts enjoyed employment as part of the program, most of these initiatives in the Gulf were not created to directly address youth joblessness. The countries established conscription as part of national identity projects, and to increase nationalism and responsibility in young men who have grown up in rentier states.

However, Morocco is not an oil monarchy, and youth unemployment remains at the top of its priorities. While the government may acknowledge this fact, it has yet to reap benefits from existing economic and social programs targeted at youth. If the government wants to use conscription to empower youth with values and skills to become more able citizens and economic engines, then a fundamental first step would be to lead a multidisciplinary dialogue on the draft law with youth stakeholders and consultative groups. This dialogue would engage the bill’s target audience—Moroccan youth—on the bill’s potential to shape youth leadership and development, integrate youth into the military service, and tie into educational reform. As it stands, the draft bill does not specifically outline how the military fits within a coherent youth development strategy, and may instead further deteriorate the youth’s relationship with the government. If the reactions to the initial announcement are any indication of Moroccan public opinion, then the next iterations of the law would benefit from being more inclusive of youth views and responsive to their legitimate concerns about conscription.

Sarah Alaoui is a PhD candidate in the Middle East Studies department at the Johns Hopkins School of Advanced International Studies.
Leila Hanafi holds a PhD in law from the UK,  is  an international lawyer in Washington DC, with the World Bank Group and founder and principal of international development law firm ARPA Dispute Resolution www.arpainternational.org

Image: Photo: Moroccan soldiers line up as they wait for the arrival of King Mohammed VI to inaugurate the opening of the new Renault factory in Melloussa, 30 km (18 miles) from Tangiers, February 9, 2012. REUTERS/Youssef Boudlal