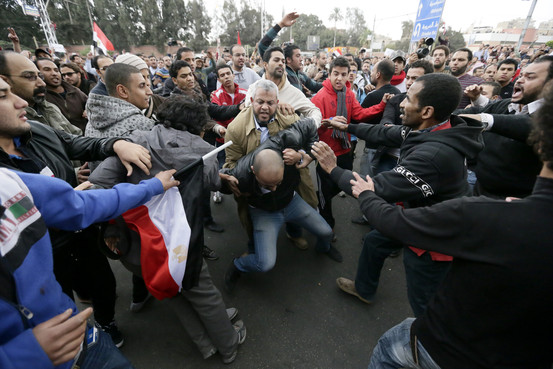 Vice President Mahmoud Makki called for calm on Wednesday, offering the newest proposal from the Mohammed Morsi government in an effort to ease the ongoing political crisis in Egypt. At a press conference in Cairo, Makki issued an invitation to all opposition forces to discuss and revise the most controversial articles in the draft of Egypt’s new draft constitution. The draft, approved by the Constituent Assembly in a marathon session to dodge its possible dissolution by the Supreme Constitutional Court, contains numerous contradictory articles that critics argue limit citizens’ rights, institutionalizes the military’s prerogatives, and leads Egypt down the path to theocracy. It remains unclear if opposition forces, largely marginalized by the Islamist-led government and the Constituent Assembly, would accept such a deal in light of recent events.

Makki’s proposal reopens the draft constitution to much needed discussion, but his proposal completely ignores major grievances and remains riddled with ambiguities that offers virtually no guarantees to secular, moderate, liberal, and leftist political players. Specifically, the vice president relayed:

When laid out (sans Makki’s decorative rhetoric and paternalistic head-patting), the problems with this plan emerge immediately. Makki offered no guidance regarding what disputed articles the Morsi government would reopen for discussion. Would Morsi decide, or would it be a free-for-all? He also made no clear delineation – or even suggestion – for the rules of procedure that would provide a dispute-resolution mechanism. Plagued with divisions along ideological lines, the Constituent Assembly fell apart and the one-sided drafting resulted in a highly flawed document. How does this arrangement change the dynamic?

Additionally, the distrust between and within Islamist and non-Islamist forces makes any agreement highly suspect. What legal authority would such a document actually have? What guarantees that a new parliament (likely Islamist-dominated) would respect and enact the agreed-upon wording for any constitutional amendments? And lastly, why go through a referendum at all if the most contentious articles will change?

Morsi himself has yet to address the massive political turbulence. The fact that he put forth a proposal to ease the crisis signals a willingness to negotiate and an implicit acknowledgement of sizable popular protests taking place outside his presidential palace and in Tahrir Square. Positive a step as it is, Morsi’s proposal, at worst, completely ignores the demands of the National Salvation Front led by prominent opposition figures Mohamed ElBaradei, Amr Moussa, and Hamdeen Sabbahi. Put forth after Tuesday’s mass protests, the Front urged: rescinding the decree granting immunity to President Morsi’s imperial powers, scrapping the draft constitution, and convening a new, balanced, and representative Constituent Assembly.

One may argue that the plan addresses the latter two demands, but in reality, any endorsement implicitly accepts a process that marginalized minority opinions and contributed to the current polarization and factional street violence. Makki defended the referendum, citing the two-week deadline set by Morsi’s August 2012 decree. The position is disingenuous at best given the ad hoc constitutional decrees from both SCAF and President Morsi that set Egypt’s transition down its turbulent and now dangerous path.

One can hardly blame National Salvation Front leaders for rejecting such vague terms in a subsequent press conference of their own. However, the urgency of Egypt’s current climate necessitates immediate steps to deescalate the tension and to deal with the longer-term legitimacy crisis perpetuated by the political schism.

Tarek Radwan is the Associate Director for Research at the Atlantic Council’s Rafik Hariri Center. He previously reported on the Middle East with Human Rights Watch’s MENA division and served as a Human Rights Officer for the United Nations/African Union Hybrid Operation in Darfur.