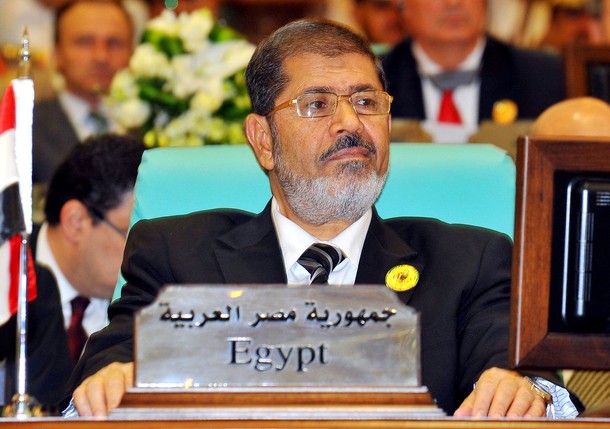 The aides consist of one woman, Pakinam al-Sharkawi, one Coptic Christian, Samir Morcos, one member of the Salafi Nour Party, Emad Abdel Ghafour, and one member of the Muslim Brotherhood’s Freedom and Justice Party, Essam Ahmed al-Haddad.

Pakinam al-Sharkawi, a political science professor at Cairo University, was appointed as assistant for political affairs. A Fulbright Scholar, she holds a PhD in comparative politics and development. Her area of focus has included democracy and Islam, Islamic movements, as well as studying the Iranian and Turkish examples of political Islam. According to AFP, al-Sharkawi, who is not affiliated with any political parties including the Freedom and Justice Party (FJP), described the Muslim Brotherhood as “an expression of moderate Islam.” Al-Sharkawi was also a vocal supporter of Morsi during the presidential elections.

Samir Morcos, a Coptic scholar and writer, was appointed as assistant for the “the democratic transition”. A 2005 Ahram Weekly profile of Morcos describes him as an “active voice in the realm of Muslim-Christian relations for the last 20 years.” With a focus on Coptic and citizenship issues, he has worked with international development agencies, while also researching and writing. He has been actively involved in projects focusing on Copts, co-founding several organizations including the Coptic Centre of Social Studies. He has also worked with the Middle East Council of Churches (MECC) and Al-Fustat Research Centre. Morcos does not belong to a political party, but is a member of the National Association for Change and was named a member of the current constituent assembly, but withdrew shortly after it was formed.

Emad Abdel-Ghafour, a surgeon and chairman of the Salafist Nour Party, was appointed as assistant in matters relating to “relations with civil society”. Abdel –Ghafour lived and worked in Saudi Arabia, Qatar and Turkey, before returning to Egypt, where he was involved in the founding of the Nour Party.  In an interview in February, Abdel Ghafour spoke highly of the National Democratic Institute, one of the US NGOs under investigation, following a crackdown on civil society groups spearheaded by former Minister of International Cooperation, Fayza Aboul Naga. At the time, Abdel Ghafour described NDI’s work as “a type of enrichment of political life,” following the Nour Party’s participation in NDI-organized training sessions on public opinion polls and monitoring party manifestos.

Essam Ahmed al-Haddad, a member of the Muslim Brotherhood’s Freedom and Justice party, is now assistant for “external relations and international cooperation”. Al-Haddad is a member of the Muslim Brotherhood’s ‘Guidance Bureau’, the highest ranking members of the organization, a group which Morsi himself belonged to before his resignation upon winning the presidential elections. Al-Haddad was also the FJP’s Foreign Relations Committee Officer meeting directly with foreign delegates, including US Assistant Secretary of State for Democracy, Human Rights and Labor, Michael Posner, the ambassadors to Japan, Comoros, as well as meeting with the Norwegian Foreign Minister and South African Deputy Foreign Minister.

2.   Umayma Kamel El-Salamoni (One of two women advisers and a member of the Muslim Brotherhood’s FJP and current Constituent Assembly)

9.   Sekina Fouad (One of two women advisers, a journalist and Deputy Chairman of the Democratic Front Party)

11.   Essam al-Erian (Deputy and Acting Chairman of the FJP)

12.   Major General Emad Hussein Abdullah (Served as Assistant to the former Minister of Interior, is a member of the constituent assembly, and former head of Egypt’s Police Academy)

14.   Farouk Guweida (Journalist and poet. Guweida has already described his priorities as an adviser as “cultural affairs and general freedoms”.)

Earlier this month, Morsi appointed former Prime Minister Kamal al-Ganzouri as a presidential adviser, after the FJP had earlier criticized his role in the former cabinet. Defending the decision, Presidential spokesman Yasser Ali said, “Criticizing al-Ganzouri doesn’t mean disregarding his patriotic and economic significance.” Hussein Tantawi and Sami Anan were also named presidential advisers earlier this month, when they were dismissed from their positions. The three names were not, however, included on the list announced by Yasser Ali on Monday.

In response to the latest appointments, Ayman al-Sayad, a journalist and member of Morsi’s advisory board told Egypt Independent “I hoped the team would not have been selected from certain political parties or groups. But most of it is.” On Twitter, Ayman Nour described the new team as dominated by Muslim Brotherhood and Salafi members, joined by some technocrats, but added that there was no liberal representation on the list. That said, he praised the addition of Amr al-Leithi and Farouk Guweida to the list.