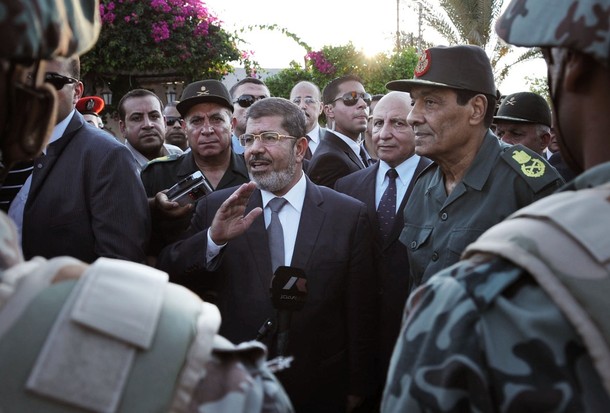 Just when Egyptians thought that the interim period had started to settle down, President Mohammed Morsi issued a game-changing constitutional decree that has set the political scene on fire. Despite the Constituent Assembly’s problems in drafting the new constitution, the parliamentary vacuum giving Morsi unprecedented power, and the judicial adversity to the executive branch, the country arguably slogged towards a consensus-based foundation that was supposed to return ultimate authority to the Egyptian people. With the announcement of the constitutional decree, Morsi unilaterally rearranged the playing field and, at first glance, threatens the transitional period in Egypt’s struggle for democracy.

Yaser Ali, the presidential spokesperson, announced today Morsi’s presidential order that decreed the insolubility of the constituent assembly by any branch of the government and an extension of its viability as a drafting body for an additional 2 months, the replacement of the Prosecutor General Abdel Maguid Mahmoud with Tal’at Ibrahim Abdullah and a reopening of investigations concerning “victims of the revolution,” and the compensation awarded to victims and their families who were killed or wounded since the January 25th uprising. Aside from the contentious implications for each of the aforementioned points, the most striking part of the decree is article 2 that claims that all decisions by the president may neither be struck down nor suspended. Protesters fighting security forces in Mohammed Mahmoud Street strongly rejected the announcement and judicial sources immediately announced a review of the legality of this decree.

The decisions regarding the constituent assembly ensure the continuation of the members’ work on the constitution in the face of walkouts by Christian, liberal, leftist, and professional representatives last week. The decree also forcibly removes any influence the judicial branch may exert over the viability of the body. It presents a direct challenge to the authority of the Supreme Constitutional Court that was set to rule on the constitutionality of the law regulating the formation of the assembly on December 2. Had the assembly been dissolved by the court, it would have activated Morsi’s previous constitutional decree that would force President Morsi to choose a new assembly. Morsi would then bear the responsibility for its membership, placing him in an uncomfortable position. With this decree, Morsi sidestepped a difficult situation but in doing so has overstepped his popular authority.

President Morsi has taken his most dangerous step yet. A judicial source described it as a political and constitutional coup that benefits neither the rule of law nor the people of Egypt. By insulating any and all decisions from the moment he took power until the new constitution and parliamentary elections, he effectively has assumed the role of a dictator after promising to limit the use of his imperial power, self-appointed after removing the top generals and the Supreme Council of the Armed Forces from power. Islamist groups defended Morsi’s decree, claiming that the powers remain interim during the transitional period and necessary to fight the corrupt counter-revolution – including the judiciary – that has hijacked the constitutional drafting process and who have an interest in derailing the democratic transition.

The replacement of the prosecutor general echoes the theme of fighting a persistent and corrupt Mubarak-era counter-revolution. Since the dismissal of charges against the prominent National Democratic Party accused of instigating the Battle of the Camel during the January clashes with government forces, a war between the Prosecutor General Abdel Maguid Mahmoud (now ex- prosecutor general) and Morsi has played out in public. Morsi, in response to popular demands, attempted to dismiss Mahmoud from his post after the verdict. The judiciary rallied to Mahmoud’s support, however, whose position remained protected by law. Now it appears that Morsi has forced his will, deepening the rift between the executive branch and the Muslim Brotherhood.

The constitutional decree has undoubtedly shaken the foundations of Egypt’s transition and reactions along political lines are to be expected. Morsi may have intended this decision to streamline the process towards a stable system and remove obstacles towards a new constitution and a representative parliament, but the precedent he set today resorts to the exact methods that sparked the January uprising and threatens the consensus-building climate necessary for a sustainable democracy.

Tarek Radwan is the Associate Director for Research at the Atlantic Council’s Rafik Hariri Center. He previously reported on the Middle East with Human Rights Watch’s MENA division and served as a Human Rights Officer for the United Nations/African Union Hybrid Operation in Darfur. Mr. Radwan specializes in Egypt, with a focus on civil society, human rights, the constitution, and judicial issues.