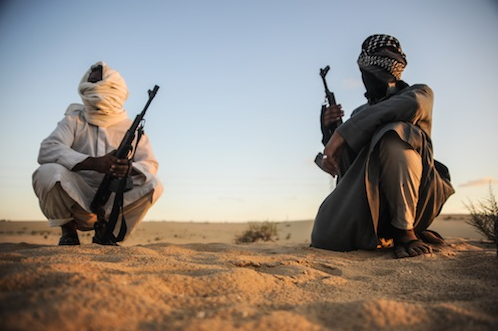 After the January 25 revolution, a security vacuum permeated the Sinai Peninsula impacting the region. A rise in terrorism and illicit activity, often associated with the underground tunnel network leading into Gaza, were immediate by-products of the vacuum. When former President Mohamed Morsi took office, Egyptians hoped that stability would return to the turbulent rugged Peninsula. Yet as Morsi failed to re-instate security, the situation grew more volatile with a visible increase in militant activity, which reached its peak after his overthrow on July 3.

Accordingly the Egyptian military launched an “anti-terrorism” operation and announced that since Morsi’s ouster, it had arrested over 100 “terrorists” of which around sixty were killed. Sinai has since devolved into a daily scorecard of attacks on military and police establishments, and retaliatory arrests and attacks on alleged militants.

“Morsi’s campaign promised that Sinai would be one of the four pillars of his Nahda program, and thus would receive a quarter of its spending on development and investments,” Mohamed Sabry, a journalist in al-Arish explained, referring to the Brotherhood’s “Renaissance” project, the platform used by the Brotherhood during both parliamentary and presidential elections. However one year later, locals say none of the money earmarked for development was delivered.

Despite decades of ambitious plans, dating back to Sinai’s return to Egypt in 1982, locals complain that successive governments, Morsi’s included, have accomplished little. The Peninsula remains devoid of basic amenities such as clean water, quality healthcare and education, adequate transportation and infrastructure.

“We don’t even have functioning well-staffed or equipped hospitals; if someone has an accident, they are more likely to die, unless treated in Ismailia or Cairo,” said Ibrahim Abou Ashara El-Menei, the head of the Sinai Tribes Coalition, and a member of the Sawairka tribe, the largest tribe in North Sinai. El-Menei also cited high unemployment rates as a primary reason for extremism and criminal activity in the Peninsula.

Accordingly, the Brotherhood’s plan to develop the impoverished politically sensitive Peninsula seemed logical, though it appears little was done. Proposed initiatives, such as the construction of affordable housing or improving mobile networks, never surfaced.

“Morsi failed to keep his promise to reactivate Egyptian mobile networks near Rafah, Sheikh Zuweid and all the Egyptian border villages,” said Sabry, adding that his friends living on the borders are forced to use either Palestinian or Israeli networks.

Even existing projects—like the Sheikh Gaber Al-Sabah Canal extension initiated in 1997 to provide irrigation water to the parched land—have yet to be restarted. The same goes for land reclamation initiatives, while plans to improve North Sinai’s transport networks have seen no progress. The airport in Ras Sidr is still not functioning; the governorate’s sole airport located in al-Arish offers flights only for pilgrimage to Mecca or for military purposes. The 225-kilometer railroad, linking Ismailia, al-Arish and Rafah—which Morsi vowed to complete within months after taking office—remains unfinished.

Morsi also pledged to alter the government’s discriminatory treatment of Sinai’s Bedouin, often dismissed by the previous regime as Islamic militants and criminals. He promised an investigation, and a review of cases of Bedouins tried in absentia.

“The age of oppression and discrimination has reached an end. Sinai is part of Egypt, and is equal to other parts of Egypt,” Morsi said during a visit in October 2012, vowing to reopen cases which involved the jailing of Bedouins said to be involved in extremist activities in 2011. But locals complain that no investigations were initiated while he was in office.

Another failed promise relates to the issuance of land permits to Sinai’s Bedouin population. The national authority for the development of Sinai (SDA) created draft legislation to permit land ownership, which was still pending approval upon Morsi’s removal. Bedouins also complain that under the former president they were still unable to enter the army.

In relation to the ousted leader’s promise to restore stability, Morsi launched “Operation Eagle” last year—a military campaign (in accordance with the 1979 Israel-Egypt peace treaty) intended to rid Sinai of militancy. Initiated in August 2012 after sixteen border guards were killed in an attack, Operation Eagle failed to capture the perpetrators as Morsi promised, and locals claim little was done. Notably the armed forces recently announced that they allegedly killed some of the militants involved in this specific attack.

Although hundreds of smuggling tunnels between Egypt and Gaza were destroyed under Morsi’s military campaign, according to Sabry and Bedouin activists in North Sinai, it was nothing more than a media stunt used by the former government to distract Egyptians from the ongoing injustice.

“Operation Eagle was a failure; the majority of the tunnels are still operating. With the new development projects in Gaza, the need for them has grown, and this has increased strife,” says Bedouin rights activist Said Abdel Hedi, also of the Sawairka tribe. Abdel Hedi addsthat conflict between the Sawairka and Tarabeen tribes has increased since the late emir of Qatar invested $4 billion to develop Gaza.

Like many Bedouin, Abdel Hedi also criticized Morsi and his government for their alignment with Hamas, claiming  that the group gained further dominance over Sinai under Morsi’s presidency.

Prior to June 30, when confronted with the list of Bedouin complaints against Morsi, while still in power, the FJP provided a number of justifications. Dina Zakaria, a party spokesperson and co-founder of FJP’s Foreign Relations Committee held the transitional period and the counter-revolutionary forces accountable for blockading Morsi. She maintained that these hostile elements prevented  the Nahda’s development initiatives from taking off the ground. The influence of the Supreme Council of Armed Forces, as well as poor media coverage and people’s unrealistic expectations, were also listed as compounding obstacles facing Morsi and the FJP.

Irrespective of the FJP’s justifications, the list of empty promises has caused many of Sinai’s residents to feel the same resentment towards Morsi and the Brotherhood as they felt towards previous governments, which similarly neglected their basic needs. Accordingly Sabry alleges many of Sinai’s populous chose to support Morsi’s ouster, adding however that the region has not been immune from the severe polarization seen around the country.

“Morsi has left us in a worse predicament than we were under Mubarak, who at least enforced security,” said Abdel Hedi, echoing a sentiment felt by many throughout Egypt. The deteriorating socio-economic and primarily security conditions have led some locals to flee the volatile territory, particularly Coptic Christians who are often targeted by Islamic militants following Morsi’s removal from office. Locals who supported his dismissal and participate in anti Morsi rallies have also been victimized by militants and pro-Morsi sympathizers, another example of the dangerously expanding social divisions and polarization in Egypt.

“Since Morsi’s ouster, militants have increased their offensive against all his opponents as they do not want the old regime to return,” explained Ahmed Abu Deera, a local Bedouin from al-Arish, and a member of North Sinai’s Sawairka tribe. Abu Deera adds that not all militants are Morsi and Brotherhood supporters. Some are more concerned with protecting their self-interests linked to lucrative illicit trade that would be affected by tighter security measures, as was the case under Mubarak. Other militants, he says, have chosen to obey recent fatwas made by prominent Islamists to take up arms in defense of the “Islamist project,” he said.

As a result of all the fiercely opposing fronts, North Sinai’s populous remain victim, in a state of limbo and insecurity, devoid of quality services and basic amenities. Sinai’s Bedouin and political analysts concur: stability in Sinai is dependent on the army and new government’s objectives in Sinai and whether they intend to rid the region of terrorism, as well as initiate development. Sinai is yet one more example of how the interim and future governments must learn from Morsi’s mistakes.