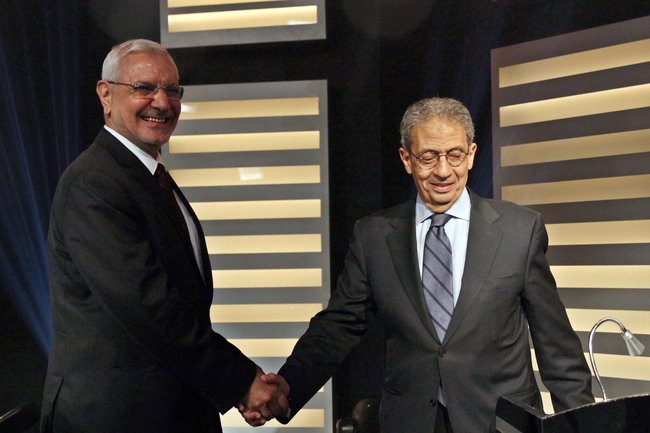 Amr Moussa began on the offensive, starting by questioning Abdel Moneim Abouel Fotouh’s position on Sharia law, and so it continued, with Moussa spending more than the rebuttal time attacking Abouel Fotouh, who was attempting to present himself as someone who has united people. In return, Abouel Fotouh repeatedly referred to Moussa’s history as part of the regime of toppled Hosni Mubarak. The standout concession of the night came after Moussa prodded Abouel Fotouh into admitting that he intended to implement the rules of Sharia law, not just the principles as stated in Article 2 of the outgoing 1971 Constitution. Abouel Fotouh countered that implementing Sharia law did not in any way contradict principles of citizenship and equal rights, nor would it curtail freedoms of speech or expression. Both stressed judicial independence, and came out with strong rhetoric regarding the armed forces, but it was evident that neither would actually be willing to curb the military that much nor hold them accountable for anything.

Talaat Abdel Awi, Egypt’s Vice-President of the General Federation of Associations and NGOs, said that the Higher Committee for the Presidential Elections agreed to grant permission and licenses to some 320 members of the General Federation and Regional Associations and local NGOS as representatives of civil society to monitor the electoral process, in addition to the permits given to human rights organizations. the Federation will issue daily statements and prepare reports at the end of the electoral process and submit it to the National Council for Human Rights and the Higher Committee for the Presidential Elections and the Ministry of Insurance and Social Affairs.

Cabinet’s Information and Decision Support Centre (IDSC)  on Thursday issued results of a recent survey on upcoming presidential elections. According to the survey results, Abdel-Moneim Abul-Fotouh came in first place with 9 per cent of the vote, followed by Ahmed Shafiq with 8 per cent. Amr Moussa received 7 per cent of the votes, meanwhile, whereas Mohamed Mursi received 4 per cent. Candidates Hamdeen Sabbahi and Khaled Ali, for their part, received 2 per cent each.  The survey was conducted by phone from 5 to 7 May from a representative sample of 2264 citizens aged between 18 and 30 from all over the country.

In light of the imminent failure of political groups to draft a permanent constitution before a new president is elected, the debate resumes on the best temporary constitutional framework that can regulate power sharing between different branches of the state. The new president will take office before a full-fledged permanent constitution that lays out his exact authorities versus those of the parliament is issued. To avoid a constitutional ordeal, legal experts suggested that the old constitution be reactivated or that the Supreme Council of the Armed Forces issue a new constitutional declaration detailing the jurisdiction of each branch of government. However, not all political forces seem to agree on the same way out.

A splinter group of April 6, the Democratic Front, said the change was made to allow parliament to “to save face” after it suspended sessions for a week to demand the government’s resignation. “The Movement’s rejection of the reshuffle does not mean we are satisfied with the Ganzouri Cabinet,” said the movement’s media spokesman, Tareq al-Kholi pointing out that they are “completely dissatisfied with its performance but that they prefer it remains until the end of the elections.”

Egypt is suffering between a 40 and 75 percent fuel shortage, while the shortage for Liquid Petroleum Gas (LPG) stands between 30 and 50 percent, said the Egyptian Federation of Chambers of Commerce’s (FECC) General Division for Petroleum Products. Ahmed Abdel Ghaffar, the division’s vice president, criticized the fact that the Petroleum Minister failed to implement his decision concerning the allocation of one inspector for every four gas stations to prevent petroleum products making their way to the black market.

Egyptian Prime Minister Kamal El-Ganzouri announced at a press conference on Wednesday that Egypt’s state revenues rose by 23.5 per cent over the last five months, representing an increase of some LE36 billion (roughly $6 billion), flagship state daily Al-Ahram reported Thursday. The prime minister added that Egypt’s external debt had fallen by some $2 billion to reach $33 billion in April of this year, compared to $35 billion the same month last year. In light of the higher revenue, El-Ganzouri told reporters, the government plans to raise Egypt’s supply of butane gas cylinders and diesel fuel.

Ouda Trabin was arrested in Egypt 13 years ago on charges of espionage and received a life sentence. Egypt is negotiating a prisoner exchange deal with Israel that would see 65 Egyptians imprisoned in Israel swapped for the Israeli spy. The Israeli ambassador to Egypt, Yaacov Amitai, has postponed his weekend trip to Tel Aviv in order to work on the deal.

Saudi Arabia offered to pay US$4 billion in exchange for Hosni Mubarak, Muslim Brotherhood Deputy Guide Khairat al-Shater said at dinner with 300 families in the Helwan district on Wednesday. Supporters of the revolution believe Saudi Arabia worked to undermine the uprising because Mubarak was its closest ally in the region and it feared the revolution could affect other Arab regimes.

A source with the Alexandria Prosecution told state news agency MENA that a case of weapons smuggled from Libya has been referred to military prosecutors to investigate, as it involves large quantities of arms and ammunition. Security services had seized the weapons in Matrouh, north west of Cairo. London-based newspaper Asharq al-Awsat quoted an Egyptian security source on Monday as saying that Iran may be funding the smuggling of Libyan weapons to the Sinai Peninsula to cause unrest in the already troubled area.