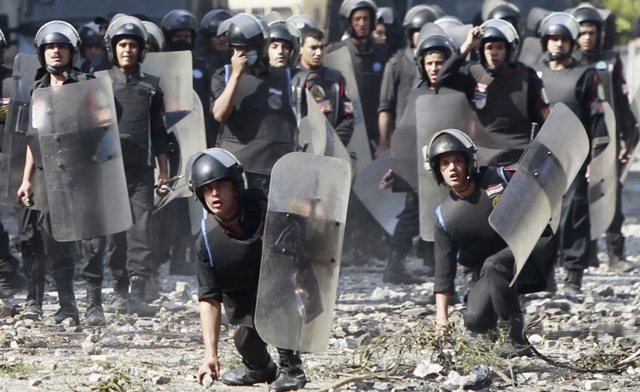 As protests spread across the region, making their way into Palestine, Lebanon, Yemen, and further, Egypt’s Muslim Brotherhood is backtracking on its initial call for protests on Friday. Earlier this week, the Brotherhood’s Secretary General, Mahmoud Hussein, called for "peaceful protests on Friday outside all the main mosques in all of Egypt’s provinces", but on Friday released a second statement withdrawing the call to protest.

"Dr. Mahmoud Hussein, Secretary-General of Egypt’s Muslim Brotherhood, affirmed that when the group called for today’s rallies in front of mosques across Egypt, in honor of the Messenger of God, its objective was to allow all Egyptians to express the anger and outrage felt by all Egyptians, in peaceful demonstrations outside mosques all over the country, and not focus on Tahrir Square alone.

Due to developments over the past two days, the Brotherhood has decided to join in Tahrir Square rallies only symbolically, so as to avoid a situation where thugs take advantage of the place and attack public and private property or instigate confrontations where people may be injured or even killed, as happened on several previous occasions.

The Brotherhood calls upon all movements, groups and parties participating in Tahrir Square demonstrations and in rallies in governorates all over Egypt to express protest in a civilized and peaceful manner commensurate with the great civilization of the people of Egypt and Islam."

The statement, which came very late, did little to subdue sentiment among protesters in Cairo on Friday, as clashes continued in Tahrir Square.

The organization is once again treading a fine line between protest and politics – satisfied with a ‘symbolic’ presence in Tahrir, which gives the organization the luxury of supporting the cause of protests against an anti-Islam film, without risking clashes with an Egyptian police force.

Brotherhood deputy Khairat al-Shater’s response to the incident, published Thursday as a letter to the editor in the New York Times, makes no reference to the protests, focusing instead on Egypt-US relations. He writes, "Despite our resentment of the continued appearance of productions like the anti-Muslim film that led to the current violence, we do not hold the American government or its citizens responsible for acts of the few that abuse the laws protecting freedom of expression," adding that the attack on the embassy was "illegal under international law", calling for an investigation into the failure of police to protect the premises.

Between Morsi’s delayed response to the events, and the Brotherhood’s fluctuating position, it would appear that the organization and president are both still in the process of finding a balance between the internal demands of appeasing an angry public, and the external demands of handling international relations.