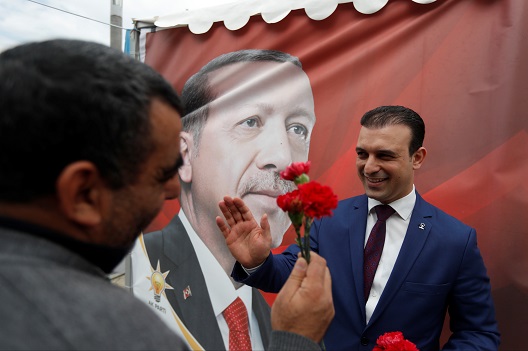 With the Turkish presidential and parliamentary elections that took place on June 24, the issue of naturalized Syrian refugees’ participation was a major point of contention. Turkish parties have divergent views on the Syrian refugee situation in Turkey, and there was an increase of public campaigns rejecting their stay in the country. A wide range of opposition party campaigns called for refugee repatriation, while Syrians with Turkish citizenship were expected to vote for the ruling Justice and Development Party (AKP).

The strongest opposition parties—the Republican People’s Party (or CHP, the oldest, Kemalist, social-democratic political party) and the Good Party (or İYİ, a nationalist, liberal conservative, and secularist political party founded in 2017)—stressed the need for Syrian refugees to return home after the end of armed conflict and when the basic infrastructure for their return is in place. CHP went further, promising to radically change Turkey’s foreign policy and open new channels of communication with Bashar Assad’s regime to resolve the refugee problem. In the event of its victory, CHP also promised to abolish benefits enjoyed by Syrians in Turkey, such as free healthcare.

For the first time, a number of Syrian refugees participated in these elections as Turkish citizens. The Turkish government granted some Syrians Turkish extraordinary citizenship on the basis of Article 12 of the Naturalization Law, which authorizes the cabinet to grant citizenship to foreigners who provided outstanding services to the country economically or in the arts, sports, or technology for example, or for which there is a dire national need.

Of the nearly 3 million Syrian refugees in Turkey, some 50,000 Syrians have been granted Turkish citizenship, including children under 18. The government has promised to naturalize another 300,000 Syrians. According to Turkish officials, 30,000 Syrians are eligible to vote in the next election, out of a total of 58 million Turkish voters.

Although the number of naturalized Syrian remains minute compared to the number of Turkish voters, opposition leaders claimed it could affect the outcome in provinces where there is considerable competition between the dominant Justice and Development Party (AKP) and its opponents. In Hatay province for example, eleven parliamentary seats were up for grabs, some of which in previous years had been won by only a few hundred votes. The highest concentration of naturalized Syrians lies within this province. As preparations for Turkey’s early elections began, Syrians with Turkish citizenship received notices via the government e-devlet site that notified them of their polling stations and provided them with the place and time allotted for voting.

Although Turkish law does not specify when those who receive citizenship are eligible to vote, media reports previously discussed the possibility of excluding naturalized Syrians from participating in elections during the first year of citizenship, particularly in cases with those granted citizenship under the extraordinary conditions of Article 12 of the Naturalization Law.

“There is nothing in the Turkish constitution that prevents them from voting, even if they were granted citizenship a few days before the elections,” Ghazwan Karnafel, a human rights activist and member of the Free Syrian Lawyers’ Caucus in Turkey, told SyriaSource. Karnafel says that the debate over the right of naturalized Syrians to vote is political, not legal.

The Turkish constitution establishes that all citizens are eligible to vote, unless they are under the age of 18, privates or corporals serving in the military, students in military schools, or convicts.

Turkish President Recep Tayyip Erdogan said that granting some Syrians Turkish citizenship has humanitarian dimensions and helps open the way for them to work legally in Turkey. However, the opposition remain skeptical, emphasizing the political dimensions which they say give the ruling AK party additional votes.

“The decision to grant citizenship is a serious issue that shows how Turkey is governed,” CHP President Kemal Kılıçdaroğlu said in a statement. “The goal of this step is not humane, but it is aimed at achieving an advantage for the ruling Justice and Development Party.”

On the other hand, university professor and Director of the Center for Middle East Studies Ahmet Uysal believes that the issue of naturalized Syrians is “an attempt by the opposition to justify its policy.” He cast doubt on the likelihood that ten or twenty thousand voters could change the election results in a country with about 58 million voters.

Most naturalized Syrians did not hide their support for Erdogan and his party in the coming elections. Most of them support the Turkish president due to his stance towards the events in Syria and its refugees, and in reaction to the hostility by some opposition figures about their presence in the country.

Qusai Khattab, a Syrian who works at the Recep Tayyip Erdogan School in the border province of Hatay and who received Turkish citizenship eight months ago, expressed his interest in participating in the vote to exercise his right as a Turkish citizen. Khatib told SyriaSource that he would support the AKP for its positive stance towards Syrian refugees and that the other opposition parties openly declare their hostility and intent to expel them from the country. “Most of those I know of those naturalized will elect the AKP and support its programs in the coming period,” Khatib said.

Recently, the AKP nominated Syrian businessman Muhammad Shaikhouni, who holds Turkish citizenship, to parliament for the Bursa province. He later changed his name to Muhammed Erdogan. He  said that the voice of the Syrians will be in the Turkish parliament if he wins. He also promised to support establishing projects to help Syrian refugees find jobs.

Not all naturalized Syrians were excited about the upcoming elections, among them Engineer Wael Abdullah. “Most Turks still cannot accept naturalizing some Syrians,” he told SyriaSource. “Based on this principle, non-participation in the elections will relieve tension with Syrians and avoid any friction with the society in which they live.”

Some Syrians entitled to vote said they would not participate because they lack fluency in the Turkish language. “Since I came to Turkey and I work as a teacher in temporary Syrian schools, I did not feel the importance of learning Turkish and neither did many of my colleagues,” said Ahmed al-Basha, a teacher who lives in the border town of Rihaniyah. “After getting Turkish citizenship, I feel embarrassed by this. I will abstain from voting to avoid any embarrassing situation to which I may be subjected.”

The results of the elections will affect not only the fate of the Syrian refugees in Turkey, but also outline the future for those who are expected to settle in this country and obtain Turkish nationality. The continuation of the naturalization project is linked, many Syrians believe, to the survival of the ruling party and its ability to remain in power.

Image: Syrian-born businessman Muhammed al-Sheikhouni, who changed his name to Muhammed Erdogan, a candidate for President Tayyip Erdogan's ruling AK Party in the June 24 elections, is seen during an election campaign in Bursa, Turkey May 30, 2018. Picture taken May 30, 2018. REUTERS/Osman Orsal