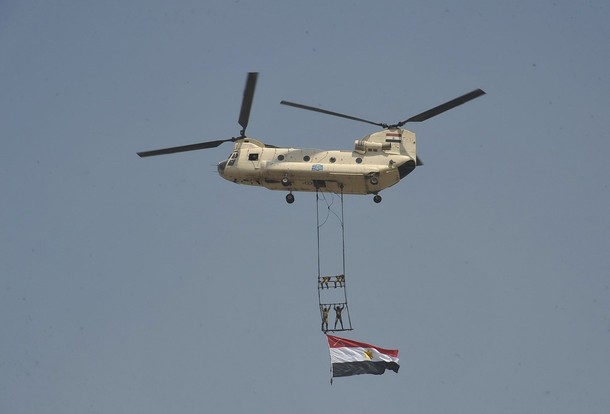 Saying Egypt’s military is large and influential is pretty much like saying “It is what it is.” This type of complacency has survived because the military tends to assume an influential role in many large powerful countries boasting a military-industrial complex, such as Turkey, China, and even the United States.

Egypt has lived through three decades of a single party monopoly–whether ruled by a Nasser-like ‘benevolent dictator’–or the Supreme Council of the Armed Forces (SCAF) resulting from a secular institution – but solo, non-competitive institutions cannot meet all the needs of a diverse population. SCAF has operated in much the same way Mubarak did – justifying their grip on power as a form of ‘stability’ for the people, while in Syria, Bashar al-Assad uses the same argument. Overall, solo-acts tout ‘stability’ at the expense of change, which ultimately results in statism.

There is also an inherent complacency in justifying the military’s actions as a counterbalance to religious parties exerting political influence. There is the need for a pragmatic approach towards Egypt’s military, when addressing the argument of a desire for change but rejecting it on the basis of its unpredictability.  We need only look a little further east at Pakistan, which experienced a similar complacency during its period of martial law, also following a coup.  There, we are still not certain, nor confident, of how effective Pakistan’s military has been in addressing extremist Islamist elements within its own country, so I remain unconvinced that SCAF is a necessary evil.

The Rand Corporation recently published the book, Prospects for Democratization in the Arab World and in it, it recommended a few policy options specific to Egypt. Rand framed many of its recommendations for Egypt, and by extension SCAF, in the context of select countries that underwent similar transitions outside of the Arab World. An example provided pertained to the (now dissolved) parliament, which it recommended should negotiate with SCAF to ensure that power is rightfully returned to civil society.

Egypt, a country of about 83 million people, maintains an army of 440,000, exceeding that of Iraq’s, Iran’s, and Syria’s, with a significant portion of its forces stationed between Cairo and the Suez Canal. Regardless of the mitigating role the Camp David Accords have played, limiting Egypt’s military, it is in the country’s pragmatic interest to employ Egyptian males between the ages of 18 and 40, who would otherwise contribute to Egypt’s unemployment problems. When Egyptians leave the military, they do so with some vocational training, which serves as an argument for significant military spending. However, the role of vocational training does not need to be relegated solely to the Ministry of Defense, as other Ministries could likely use military surpluses to modernize education and institutionalize their own vocational training programs.

The problem with military vocational training is that it is not open to an unemployed civilian force. The dissolved parliament could have negotiated a deal with the Ministry of Defense, encouraging it to share its military assistance funding with other vocational training programs, in exchange for posting certain military budget items as a lump sum since there is a distinct separation of public spending and the military’s expenditures. Currently, military spending that does not come from US military aid falls under another category: ‘classified’.  The ‘classified’ category is so broad that it encompasses even how much food is purchased and revenue from military gas stations.

Another means of encouraging SCAF to cede power would be to offer them more significant tax incentives. The Rand report argues that the civilian bargaining chip is the Egyptian military’s preoccupation with its image–and that is enough to bring them to the negotiating table. Tax benefits will likely increase foreign direct investment, particularly from investors hailing from Gulf region. According to the Middle East Report Information Project (MERIP), the Kuwaiti business group Kharafi & Sons increased its investments by partnering with the Egyptian military’s industrial complex, as far back as 2001. With additional tax benefits afforded to the military, Egypt’s military industrial complex would draw more positive attention from foreign investors.

The Egyptian military has used its position to secure itself a place across military, civilian, and infrastructural sectors. Essentially, if an Egyptian military official has a lead role in the subsidiary, it pretty much sends a signal to outside foreign investors that its civilian front is protected. The renewable energy sector is a prime example of this phenomenon. MERIP’s analysis states: “Foreign firms have also pursued partnerships with Egypt’s military producers in order to secure a piece of Egypt’s roomy market for renewable energy and environmental cleanup projects.”

The downside is that further tax breaks for the military may be seen as “buying off the military industrial complex”–if not promoting it. That said, offering more benefits to a specific group requires a balancing mechanism – with more money and incentives, would have to come more transparency.  Ironically, transparency applies only to foreign funding, as exemplified by SCAF’s actions.  While the National Lawyers Guild, an NGO in Egypt, calls for more transparency on the matter, SCAF’s track record on sharing data on military spending follows the general regional trend.  While SCAF has done everything in its power to ensure that its budget remains a well-kept secret, it was the elected parliament’s place to learn not only how much the military is spending, but to also learn the details of the military’s tax benefits. It is only fair for citizens to know where their taxes are going.

For decades, Turkey’s military argued that its role was to check other government branches and gave civil society the impression that it offered a counterweight to power.  On July 2nd, Turkey’s AKP worked, through other government branches, to downsize their military’s role in judicial matters.  Similarly, at some point elected Egyptian officials might go beyond negotiating mechanisms and simply legislate to whittle down its military-industrial complex.

Mehrunisa Qayyum is a freelance international development consultant and editor of PitaPolicy, a blog focusing on the political economy of the Middle East and North Africa.