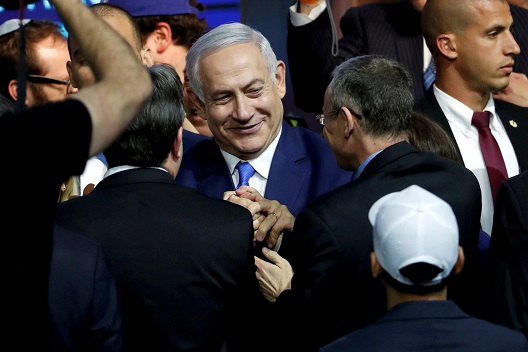 Israeli Prime Minister Benjamin Netanyahu’s narrow triumph in Israel’s election this past week constitutes a big win for the right and, with Netanyahu’s last-minute pledge to annex the West Bank, a definitive end to any substantive peace process. Netanyahu’s political survival spells the beginning of a newly-emboldened leader who, with the seemingly unconditional backing of the Trump administration, is likely to implement far-reaching policies that pander to his base. For his far right-wing coalition partners, moreover, Netanyahu’s annexation promise will become a tactical instrument of quid pro quo. Facing an upcoming indictment over a myriad of corruption charges, Netanyahu will thus likely be forced to see through his promise in return for legal protection.

With Netanyahu set to commence a historic fifth term as prime minister, he has once again shown his political mastery. By campaigning as the indispensable man and propagating false narratives about his main opponent, Benny Gantz, Netanyahu was able to steer public attention away from his looming indictment in corruption, bribery, and fraud cases and his murky entanglement in the German-Egyptian submarine deal. The latter affair, dubbed Case 3000, was revealed in the midst of the election, when Channel 13 reported that Netanyahu approved the sale of advanced German submarines to Egypt—at the expense of Israel’s security—without gaining approval from security officials and, allegedly, for his own financial gain.

In a move to secure a governing coalition, Netanyahu also brokered a ‘United Right’ alliance made up of three right-wing factions, namely Jewish Home, National Union, and Otzmah Yehudit, who were promised the education and housing ministry portfolios as well as two seats in the security cabinet in return for the merger. In his attempt to “save Likud from election defeat,” the prime minister, revived—and mainstreamed—the successors of a previously-outlawed racist party. Otzmah Yehudit, a newly-formed far-right party, is run by leaders who call themselves disciples of Meir Kahane, an anti-Arab extremist who served a term in Israel’s parliament in the 1980s before his Kach party was banned. Beyond its virulent anti-Palestinian agenda, Otzmah Yehudit encourages the emigration of non-Jews from Israel, expelling Palestinians who refuse to declare loyalty to Israel, and expanding the state’s sovereignty throughout the West Bank.

Pre-election pledges cannot be taken as gospel, particularly those espoused in the 11th hour of a tight race. Nevertheless, Netanyahu’s promise on April 6 to annex West Bank territories came in the wake of legislative moves by the Knesset to provide the groundworks for a future annexation. In February of 2018, Israel’s parliament decided to place universities and colleges in West Bank settlements, and therefore outside of the country’s sovereign borders, but under the auspices of Israel’s Council for Higher Education.

In the same month that this “Ariel University bill” was passed, Netanyahu offered an indication of his annexation intentions, when he announced he was discussing a “historic move” with US President Donald Trump. Netanyahu’s decision to block a bill co-sponsored by Likud member Yoav Kish to apply Israeli sovereignty to West Bank settlements in early 2018, moreover, was not based on ideological reasons. Rather, the prime minister told his fellow faction members and others in the coalition that the promotion of such legislation prior to the presentation of President Donald Trump’s peace deal—dubbed the “deal of the century”—could undermine future annexation attempts.

In contrast to last year, Netanyahu now appears confident in the unequivocal nature of US support. As US president, Trump appears in lockstep with Netanyahu, both on Israeli foreign and domestic policy issues. However, it is only in recent months that the Trump administration implicitly endorsed the unilateral seizing of territory.

In a pre-election boost to Netanyahu, Trump announced the US recognition of Israeli sovereignty over the Golan Heights last month, which, according to an Israeli official, established a precedent for holding onto occupied territory. In another unprecedent move, US Secretary of State Michael Pompeo refused to come out in favor of the two-state solution while testifying at a Senate subcommittee last week, a mainstay of US foreign policy on Israel-Palestine since the 1993 Oslo Accords. Secretary Pompeo also would not confirm whether the administration would oppose any plan to unilaterally annex the West Bank. Additionally, as of April last year, the US State Department’s human rights reports no longer refer to the Golan Heights, the Gaza Strip, and the West Bank as occupied, as they are designated under the UN Resolution 242 of 1967.

The right-wing government that Netanyahu intends to form—a coalition of the United Right, the ultra-Orthodox Shas, the Yahadut HaTorah parties, and the Kulanu Party—all favor annexation. At the same time, Member of Knesset (MK) Bezalel Smotrich, leader of the United Right’s Tkuma party, who co-authored the 2018 annexation bill with MK Yoav Kish of the Likud party and is now number two in the United Right alliance, is said to be working on advancing legislation that would protect Netanyahu from indictment.

One of the avenues Smotrich might be examining is restoring legislation that granted Knesset members legal immunity. Netanyahu’s legal protection appears pre-conditioned on a quid pro quo, or as Smotrich stated earlier this week: “A right-wing government will be established in the State of Israel and will serve out a full, four-year term. The key to such longevity would be restoring legislation that existed until 2005 and provided Knesset members with automatic immunity from criminal prosecution […].” This statement was followed by Smotrich reminding the prime minister that he “had promised two days ago to extend sovereignty over Judea and Samaria [the West Bank]. That promise must be kept.”

If Netanyahu fails to keep his promise, his future coalition partners could take an approach from former Jewish Home Chairman Naftali Bennett last year. In order to push Netanyahu to move ahead with the 2018 Ariel University bill, Bennett announced a freezing of the Ministerial Committee for Litigation’s work, thereby effectively preventing the coalition from passing any future legislation until the bill was passed.

The idea of Israel partially or fully annexing the West Bank appears to be gaining broader acceptance across Israeli society. According to the Israel Democracy Institute, 63 percent of the country’s Jewish majority now self-identify as being somewhere on the right side of the political spectrum, where the idea of annexation holds more clout.

A pre-election survey conducted by Haaretz even found that voters for Zionist center-left parties, such as Labor and Meretz, did not rule out at least partial annexation of the West Bank to Israel. In total, 42 percent of respondents supported some form of annexation. At the same time, the belief in a peace deal based on the premises of the 1993 Oslo Accords has subsided substantially. Only 34 percent of respondents in the Haaretz poll still back the two-state solution. Yet twenty-six years ago, following the signing of the Declaration of Principles, or Oslo I, 60 percent of Israelis supported the paradigms of the agreement that envisaged two separate states co-existing side-by-side.

Beyond Israel’s right-wing surge, Netanyahu is largely to blame for the demise of the viability of the two-state solution. Despite being the only leader on the right to have, at one point, accepted the two-state solution, Netanyahu has also heavily promoted settlement expansion, which prevents the creation of a viable Palestinian state. According to figures by Peace Now, between 2009 and 2017, the settler population grew by almost 40 percent, to 413,400, most of whom reside in Area C, which encompasses about 60 percent of the West Bank.

In the aftermath of Netanyahu’s victory, President Trump said that the election result was “a good sign for peace.” This is likely not a peace envisioned by the Palestinians. Reports suggest that Washington’s silence on Netanyahu’s annexation statement might foreshadow the forthcoming peace plan, which could entail awarding most of Area C to Israel. If true, President Trump can join Netanyahu in a new fateful position: undertaker of the two-state solution.

Grace Wermenbol specializes in the contemporary geopolitics of the broad Middle East and North Africa (MENA) region. She holds a Masters and PhD from the University of Oxford, where her research focused on the Israeli-Palestinian conflict.

Image: Photo: Israeli Prime Minister Benjamin Netanyahu is greeted by supporters of his Likud party as he arrives to speak following the announcement of exit polls in Israel's parliamentary election at the party headquarters in Tel Aviv, Israel April 10, 2019. REUTERS/Ronen Zvulun