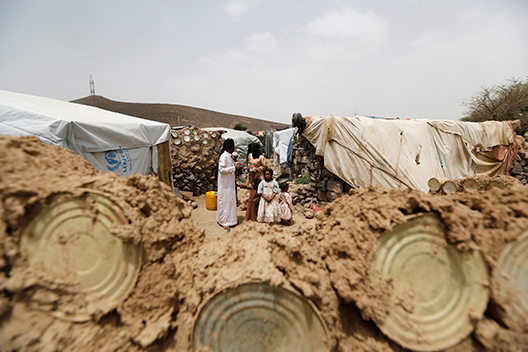 Two developments in Yemen over the past week illustrate both promise and concern for Yemen’s peace talks. Escalated fighting in the Marib and Shabwa provinces took more than a hundred lives, but the latest prisoner swap of pro-Hadi and Houthi fighters indicates that the peace process has not collapsed. With increased US pressure on Saudi Arabia, Yemen’s President Abd Rabbo Mansour Hadi may need to consider an option that he previously shunned, namely, an outcome that entails less than the full Houthi surrender demanded by UN SC resolution 2216.

Why would Hadi and his Saudi backers retreat from their demand for the full restoration of the Hadi government and unconditional surrender of the Houthis? Because that outcome is not obtainable. The problem is not that more Yemenis are loyal to Houthis and their ally of convenience, ousted president Ali Abdullah Saleh, than they are to Hadi. Each has some local support. But most Yemenis are not loyal to any of the warring parties.

The Saudis have repeatedly threatened to take Sanaa militarily if the talks fail, but thus far, whether out of necessity or choice, they remain at the table.   Even in the event that Hadi and his backers did defeat the Houthi-Saleh coalition militarily, he would be unable to unite the nation, even with a long-term commitment of military and financial support from his Gulf allies.

When the fighting stops, the massive work of humanitarian assistance, reconstruction, and development will need to begin, but that will not be possible without some large portion of the population buying into that process—which they will not do if the process itself has not been inclusive. Post-war Yemen could be one of long-term vengeance, with demands for retribution holding Yemenis in a context of insecurity and periodic violence rather than stability and security.

Powerful actors have for decades operated in Yemen by playing factions off each other. Saleh was a master of exploiting, dividing, and betraying his own people. Famously, he described his style of governing as dancing on the heads of snakes. Saudi Arabia has also encouraged a divided Yemen. At various times, it has supported Saleh, southern socialists, mainstream Islamists, jihadi extremists, various tribal elites, and other powerful actors, often simultaneously. For years it also funded Wahhabi-influenced “scientific institutes” in Yemen, which spread jihadi ideology. For more than a decade, Saudi Arabia and Saleh alike encouraged Yemenis to fight alongside the Mujahideen in Afghanistan. That project created a clash of fundamentalisms in Yemen that created rifts in many communities and angered the more progressive southerners. These actions over the years exacerbated divides among an already diverse population.

Those legacies of clientalism and mistrust will create obstacles for achieving peace and lengthen the process of reconstruction. Of particular concern are the current experiences of children. With more than 6,200 killed in the war, UNICEF reports at least 900 children were killed and 1,300 injured. Even more troubling, in a recent report Human Rights Watch estimates that one-third of the fighters in Yemen are child soldiers. The plight of children has a long-term consequence for Yemen’s future, as younger generations are raised not only without adequate food, healthcare, and schooling, but to view conflicts and differences through a fighter’s lens. They will have learned to distrust others and rely on violence to settle disputes. A post-war Yemen that is led by a government that is not viewed as legitimate and representative by Yemenis will struggle to contend with these very serious divides among a population that is already heavily armed.

But this vision of a Yemen suffering for decades need not come to fruition. An alternative outcome is still possible, if other parties to the conflict are brought to the table. While the conflict is often portrayed as a two-sided conflict between “Iranian-backed Houthi rebels” and the “Saudi-backed Hadi government,” such simplified representation silences other voices that need to be included.

The largest voice missing from the table is that of Southerners. Increasing  numbers of Southerners are considering secession in the face of a peace process that has thus far silenced them. In my exchanges with Yemenis inside Yemen and abroad, people who just months ago opposed secession are beginning to say they see no other option. Few argue that Northerners would readily acquiesce to a Hadi-led government, but too few acknowledge the deep distrust Southerners feel toward him.

The increasingly frustrated Southerners are unlikely to drop their demands for secession unless they are included in the talks and, possibly, offered at least some semblance of self-rule. Then-UN Special Envoy Jamal Benomar said in April the possibility of a federalist Yemen had been solidly on the table before the Saudi-led air strikes began on March 26, 2015, with more voices represented at the talks, and an understanding that Hadi did not speak for all of Yemen’s Southerners.  A return to such a vision remains the best option for a long-term peace. Houthis might accept a diminished role if power-sharing was not a zero-sum game and they were not the only constituency pressing for a coalition government. Hadi (and whatever government follows him) would have many constituencies to satisfy, but achieving a real transition will be possible only if diverse constituencies are represented before the terms of a transition are established.

These logics have always existed for the parties, but with heavy foreign support, the incentives to compromise have been minimal. That may have changed, particularly for Hadi, as Saudi Arabia’s execution of its campaign is coming under increasing international criticism.

US Senator Chris Murphy has pushed tirelessly for Congress to take a hard look at its role in the war, including its daily aerial refueling of Saudi bombers and the provision of intelligence to the Saudi-led coalition. While the United States has provided Saudi Arabia with a wide range of support, its weapons sales have drawn the most negative attention. Washington recently reportedly halted sale of cluster bombs to Saudi Arabia with an unnamed official citing the use of the ammunition in civilian areas. It is unclear, however, whether existing orders will be fulfilled. In early June, the United Nations briefly added Saudi Arabia to its annual black list of regimes and armed groups that violate children’s rights, although it removed it days later pending a joint investigation of the cases.

Pressure on Saudi Arabia will not lead to an end of the war, but it does create incentives for Hadi and his backers to dial back the demand for a full Houthi surrender. The Houthi voice could be diminished with the inclusion of others, but all parties will need to return to a power-sharing formula, perhaps based on the one referenced by the UN envoy before the war. Hadi could lead Yemen out of the war by creating a process that represents the interests and concerns of more Yemenis than do the current talks.

Jillian Schwedler is a nonresident senior fellow for the Atlantic Council’s Rafik Hariri Center for the Middle East.

Image: People stand near their huts at a camp for internally displaced people near Sanaa, Yemen, May 26, 2016. (Khaled Abdullah/Reuters)