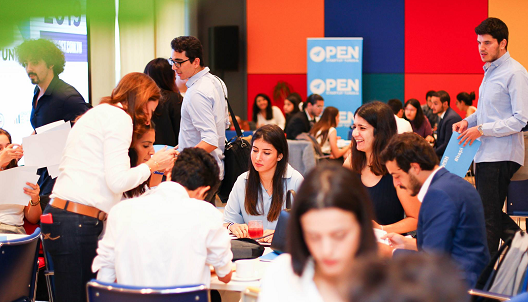 With the new Start-Up Act, passed on April 2, 2018, Tunisia has started to clear the path for innovation that could lead to economic growth. The Act removed several bureaucratic hurdles that innovative projects faced when creating new business structures—vestiges of a system implemented in colonial times. While the French mostly moved right along modernizing their systems, Tunisia remains stuck in a Kafkaesque maze that is present across every single state office and institution. The Start-Up Act aims to alleviate some of these frustrations. It is a positive and hopeful development for young entrepreneurs looking to change the world around them.

Start-ups currently represent only a small fraction of the economy – their total turnover rate was close to 30 million Dinars (9.8 million USD) in 2018. However, the adoption of new technologies such as artificial intelligence and blockchain by multinational organizations could undoubtedly impact not only the economy, but the social understanding of what labor means and how people interact with it. New technologies no longer represent mere automated machines or technical solutions to formerly analogue processes. Today, new technologies challenge the very social contracts they operate within. Take for instance the global flow of data and its unrestrained use, such as in the United States, to influence the political process. The digital economy also transforms every sector, upending traditional notions of taxation and duty to the state, as we see most recently in Austria and France. The question for the Tunisian government is not so much when and if digital transformation will take place. The question is: how prepared will the country’s leaders be for digital transformation? Are they in the right trajectory today?

It is because of this that Tunisian leaders—those in civil society, the private sector, and government policymakers and elected officials—desperately need to reflect on the impact that these new technologies could have on people and society. They will be expected to help create new ways to manage, regulate, and take full advantage of what new technologies have to offer. Tunisia has several security and economic issues to contend with currently. However, the country might be better off by mitigating and using new and improved technologies sooner rather than later.

A few projects led by individual ministries are not sustainable or large enough in scope for the long term. It is not enough to have fragmented programs operate in silos within various ministries—it is important to push for the implementation of new technologies to reform the administration itself. Instead, the Tunisian Government could commission a vision-focused, persistent, and structured approach that is implemented with roll-out technology prioritizing inclusion, fairness, and progress.

This agenda would take into consideration the effects that machine learning could have on the job security of hundreds of thousands of public servants. Through the creation of remote or teleworking positions along with a focus on creative, sympathetic, and nuanced thinking; policymakers could make up for the potential loss of jobs that the introduction of public sector automation will cause. New types of work can also help tackle the unemployment rate as the implementation of these new technologies will undoubtedly continue to need more sophisticated skillsets to oversee the work; which require human intervention and oversight. Retraining the public service workforce on the introduction of emerging technology and to mitigate its possible harmful effects (such as bias in machine learning) is crucial.

By recognizing the importance of technology, its clear connection with the economy, and the changing nature of work; the Start-Up Act is a step in the right direction. But for the law to offer real added value to the country, a lot more needs to be done. For the Act to support regional growth, the government should craft communication programs to explain and promote the law with budding start-ups. By showing start-ups how they can use the law for their benefit—in a way that is tailored to the specificities of their region—the government can ensure that start-ups utilize the law fully to continue and expand their work.

Both the government and the private sector need to also develop talent in information technology. Investing in talent is crucial not only for the success of the Start Up Act, but for economic development—the underlying motivation of the law itself. The growing awareness of the international skills gap is not unique to Tunisia, as countries around the world work to implement strategies to develop digital skills amongst their workforces. Big ideas are great, and the appropriate human skills are necessary to structure them.

It is important that all programs in all ministries incorporate a technological lens in their strategic implementation for consistency and better coordination. Because the government continues to face frequent changes in leadership for such lofty goals, the Office of the Head of the Government could create a publicly crafted and accessible plan for sustainable technological growth that is passed down from one government to the next.

Disruptive technological change is taking the world by storm, and we are only starting to see the effects of it. Look at the impact of coordinated disinformation campaigns and media manipulation on the democratic process, and repressive regimes’ ubiquitous use of surveillance technologies to suffocate societies and free expression.

In the meantime, Tunisia remains the only democratic transitioning state in the Arab world. This cannot be taken for granted by local policymakers and international actors supporting its transition. The world is passing through troublingly divisive times. While other countries in the region are facing ongoing instability, Tunisia is still en route to building an open society. Supporters of Tunisia must tolerate growing pains and learn from them: these are the pressure points that must be looked at closely.

Tunisia has advanced human rights over the years to the extent the technology and human right summit, RightsCon, will be held in Tunis in June of this year—the first time in Africa as well as the Middle East. The summit will be a great opportunity to assess and find solutions to the multiple and complex challenges that are coupled with technological developments not just in Tunisia, but around the world.

Finally, being able to vote in free and fair elections comes with responsibility. Tunisian voters are uniquely positioned to demand more from candidates running for the upcoming legislative and presidential elections in 2019. All politicians currently face hurdles to being elected in Tunisia. Voters need to ask candidates these questions: (1) how do you intend to leverage technology in planning for economic development? And (2) if you are elected, what is your strategy to best utilize technology while mitigating the risks that are coupled with it? Recent events around the world offer plenty of lessons to learn. Tunisians could do themselves a great disservice if they fail to capture these lessons while they still have the chance. The tide of sophisticated technology will impact everything—social media and mobile devices are mere details compared to what’s to come.